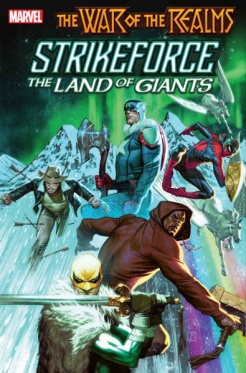 – Marvel’s ‘War of the Realms’ will bring Malekith’s forces to Earth in April, so in May the heroes of Earth will respond with three unconventional teams in three respective “War of the Realms: Strikeforce” one-shots. Creators like Bryan Hill, Leinil Francis Yu, Dennis “Hopeless” Hallum and Tom Taylor will gather their own teams in these one-shots, which are each led by the Punisher, Captain Marvel and Captain America.

– “Venom” will also be recruiting an unexpected group to defend Manhattan during the ‘War of the Realms.’ Cullen Bunn returns to write Venom again, and will joined by artist Iban Coello for this tie-in in issue 14 of the ongoing “Venom” series.

– Marvel also announced their next series of variant covers, this one playing off the numerous cat-themed heroes around the Marvel Universe. The ”Marvel Meow” covers will feature a mini comic from Japanese artist Nao Fuji, showing cats hanging with heroes and villains like Ms. Marvel, Spider-Man, Captain Marvel, Rocket and Groot, Carnage and Venom, and Wolverine.

– After weeks of animated shorts and teaser videos, the DC Super Hero Girls YouTube channel dropped the official trailer for one-hour premiere movie, which will air on Cartoon Network on March 8th. The much anticipated show from Emmy Award-winning creator Lauren Faust will then begin in due course on March 17th, airing Sundays at 4 p.m. ET/PT.

– Charlene Amoia is the latest actor to join the cast of the Birds of Prey movie. Amoia, who played Wendy the waitress in the long-running CBS show How I Met Your Mother, has joined the cast as Maria Bertinelli, the mother of Helena Bertinelli, the Huntress (played by Mary Elizabeth Winstead).

– The Bumblebee Blu-ray release will include a all-new motion comic, titled “Sector 7 Adventures: The Battle at Half Dome.” Bumblebee will be released on standard and 4K Blu-ray on April 2nd.

– Finally, arriving exclusively across North America today at Dave & Busters restaurants and entertainment centers will be the arcade version of the Marvel’s popular mobile game Contest of Champions; Ben Affleck confirmed his retirement as Batman on Jimmy Kimmel Live!; and cartoonist Nathan W. Pyle has started a new Instagram account for his comic strip “Strange Planet.”