In case you missed it, “Marvel Masterworks” and “DC Archives” editor Dale Crain has passed away, as has “The Metabarons” artist Juan Giménez. 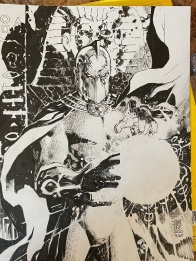 – Via Newsarama, WarnerMedia has announced in a statement that DC Comics will donate $250,000 to the Book Industry Charitable Foundation (BINC) in response to the COVID-19 crisis, aimed at aiding comic book stores and their employees. In addition to that support, DC’s Chief Creative Officer/Publisher Jim Lee will be auctioning off 60 original sketches of DC characters with the proceeds going to BINC. The auctions will feature one sketch a day, and have already gotten off to a strong start, with the first sketch of Nightwing fetching $6,501 for the cause. You can check out the eBay auction page here.

– The “pencils down” orders that have been moving through many books due to COVID-19 have reached two long-running IDW series. Newsarama reported that “G.I. Joe: A Real American Hero” writer Larry Hama and “Teenage Mutant Ninja Turtles” writer/artist Sophie Campbell shared the news of their work stoppage on social media. Hama was in the process of finishing his work on “G.I. Joe” #275, while Campbell was finishing up her work on “Teenage Mutant Ninja Turtles” #105. IDW has not yet commented on the hiatus of either book.

– Meanwhile, Newsarama also reported that Marvel Comics has announced it is stopping production on approximately 1/3 of its May and June release titles. The stoppage will affect approximately 15-20% of the company’s solicited books, although some of the affected books were scheduled to double ship during those months. When prompted as to when the books would resume production, Marvel’s spokesperson said, “As soon as more information is available, we will outline our longer-term plans.”

– Disney has announced new release dates for many of its upcoming films following the coronavirus-caused shuffle, including Indiana Jones 5 (which was delayed a year to July 29, 2022), and its slate of MCU films. Via Deadline, Black Widow will now be released on November 6, taking the spot previously held by Eternals. Each of the remaining announced films on Marvel’s slate was then pushed one slot down, taking the next film’s release date: Eternals moved to February 21, 2021, Shang Chi and the Legend of the Ten Rings subsequently to May 7, 2021, Doctor Strange in the Multiverse of Madness to November 5, 2021, and Thor: Love and Thunder to February 18, 2022. Black Panther 2 remains on track for a May 6, 2022 release date, and Disney has now added Captain Marvel 2 to its schedule for a planned July 8, 2022 release.

– In additional MCU news, Ant-Man 3 has found a new writer in the form of “Nova” and “Groot” writer Jeff Loveness. Via The Hollywood Reporter, he joins returning Ant-Man and Ant-Man and the Wasp director Peyton Reed on the project. Loveness is also known for his work in television, working on Rick and Morty and the Daniel Radcliffe-starring TBS series Miracle Workers. Marvel has yet to officially announce the project, but it will likely not see release until late 2022 at the earliest given the MCU’s delayed release dates.

– According to Deadline, actor Dylan Walsh will join Tyler Hoechlin’s Superman and Elizabeth Tulloch’s Lois Lane as a series regular in the CW’s upcoming Superman & Lois. Walsh will portray General Samuel Lane, the father of Lois who in the comics often plays an antagonistic role to Superman. Glenn Morshower had previously played General Lane in the CW’s superhero universe, appearing in a recurring role on Supergirl. After filming on the show’s pilot was postponed due to COVID-19, Superman & Lois will instead go straight into series production.

– Via The Tri-City News, Logan Williams, known for playing young Barry Allen on The Flash, has died suddenly at age 16. No cause of death was provided to the press. The Flash star Grant Gustin took to Instagram to mourn the loss of Williams, sharing a picture of himself and Williams with co-star Jesse L. Martin during the filming of the show’s pilot in 2014. “I was so impressed by not only Logan’s talent but his professionalism on set,” Gustin said. “My thoughts and prayers will be with him and his family during what is I’m sure an unimaginably difficult time for them.”

– The Merc with a Mouth is now unlockable in Fortnite. Marvel and Fortnite have announced that Battle Pass owners can unlock a Deadpool outfit by completing Deadpool’s Week 7 Challenge in the game. The announcement notes that the outfit can be unlocked even if you haven’t completed any of Deadpool’s prior challenges.

– From PREVIEWS World, Dark Horse will be staging a live reading of the first chapter of “The Legend of Korra: Turf Wars Part One” today, April 6 at 2 p.m. PST. The reading will feature the voice actors Janet Varney (Korra) and Seychelle Gabriel (Asami) reprising their roles from Nickelodeon’s The Legend of Korra TV show. Following the reading, Varney and Gabriel will answer fan questions in a moderated Q&A. The live stream will take place on Dark Horse’s Twitch channel.

– StarWars.com has offered a first look at the characters in Lucasfilm’s upcoming multi-platform project “Star Wars: The High Republic.” The preview offers a glimpse at the Jedi Knights and Masters that will play a key role in the storyline, which will be set 200 years prior to the events of Star Wars: Episode One – The Phantom Menace. “Readers will see a very wide variety of Jedi in this era,” says Lucasfilm Publishing creative director Michael Siglain. “This is a hopeful, optimistic time, when the Jedi are good and noble, and we want to reflect that in their characters while still giving them enough depth and dimension so that their individual personalities and idiosyncrasies shine through.” The first ‘Star Wars: The High Republic’ books and comics are set to debut in August 2020.