In case you missed it, we have a preview of this week’s relaunch of “Venom.” 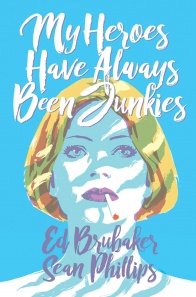 – Bleeding Cool uncovered an Amazon listing for “My Heroes Have Always Been Junkies,” an original graphic novel from Ed Brubaker and Sean Phillips (“Criminal,” “Fatale”) due out from Image in October. The book, which is Brubaker and Phillip’s first OGN together, is described as a “seductive coming-of-age story” revolving around a teenager named Ellie, who lost her mother to drugs as a young girl and grew up obsessed with drug addicts as a result. When she finds herself in an upscale rehab clinic, she learns “nothing is what it appears to be… she’ll find another more dangerous romance, and find out how easily drugs and murder go hand-in-hand.”

– Marvel continues to tease “Infinity Wars,” with an image captioned “Death Wins,” depicting the new antagonist Requiem standing triumphant over Captain Marvel and Star-Lord, their sword piercing the Infinity Gauntlet. The event, which writer Gerry Duggan described as the third act of his “Guardians of the Galaxy” run, will begin with the Mike Deodato Jr.-drawn “Infinity Wars Prime” in July.

– Ryan Reynolds stated T.J. Miller, who played Weasel in both Deadpool movies, will not return in Drew Goddard’s X-Force. Miller was charged last month for falsely calling in a bomb threat, and had been previously accused of sexual assault. For more from Reynolds, head to his interview at The New York Times, one of the few he won’t be doing in-character for the film.

– Black Panther is out digitally tomorrow and Heat Vision have the scoop on director Ryan Coogler’s commentary, which reveals the whereabouts of Killmonger’s mom. “The idea was when you see those guys [N’Jobu and Zuri] talking over the paperwork in the beginning of the film, they’re talking about a way to break her out of jail,” he explains. “The idea was they never got her out, and she passed away in prison, so Killmonger didn’t come up with a mom either.” There’s more at the link, which includes a story about Francis Ford Coppola (The Godfather)’s reaction to the movie.

– British artist Marc Jackson is launching “GOOF!,” a new kids’ anthology comic at the MACC-POW! Macclesfield Day of Comic Art on June 23. The digital-only magazine is inspired by anarchic British comic strips like “The Beano” and “The Dandy,” and will only cost £1 per issue. Jackson has written more on the comic, including contributors, at Bleeding Cool.

– Star Wars star John Boyega, aka Finn, let slip a small detail about Episode IX, revealing “The first step [before filming] is growing out my hair, so you can wait for the trailer to see why.” Episode IX, and Finn’s longer hair, hits theaters on December 20, 2019.

– Finally, we asked which Gold Free Comic Book Day offering you were most excited for. Image’s re-release of Brian K. Vaughan and Marcos Martin’s “Barrier” came in first place with 29 percent of the vote, followed by Marvel’s “Avengers/Captain America” preview, which had 23 percent of the vote.