In case you missed it, BOOM! Studios announced a second printing for “Angel” #1, and Dark Horse announced the third volume of “Ether.” We also reported on the controversy surrounding Chelsea Cain and the ninth-issue of “Man-Eaters.” We also got an exclusive preview of tomorrow’s “Catwoman” #9, and the first look at the covers for September’s “Jughead’s Time Police” #4. 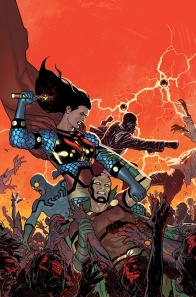 – DC Comics have announced a new one-shot to accompany their summer zombie event “DCeased” entitled “DCeased: A Good Day to Die” #1. The issue is written by “DCeased” scribe Tom Taylor, and illustrated by Darick Robertson (“The Boys”) and Laura Braga (“DC Comics Bombshells”) – along with other unannounced artists – and follows Mister Miracle and Big Barda as they team with Blue Beetle, Booster Gold, and John Constantine to survive the apocalypse. “DCeased: A Good Day to Die” #1 goes on sale September 4th.

– Comic writer James Tynion IV (“Justice League Dark”) has announced via his Twitter that he is currently working on a new creator-owned series that will soon to be announced. According to Newsarama, Tynion currently has two different independent comics in production, but only one has been publicly acknowledged by him. Tynion has penned a number of creator-owned comic series, the last of which, “Eugenic,” was released in 2017.

– Speaking of vague announcements, comic writer Brian Michael Bendis posted a series of teases across his social media accounts that seem to hint at upcoming stories about DC Comics’ characters The Legion of Superheroes. In one tweet he said, “I know some of you aren’t used to this level of teasing, but wait till tomorrow, I mean in a few hours :), when the #DCMillennium hashtag starts popping up #waitwhat?,” hinting that an announcement was soon to follow.

– A double-page spread from the upcoming “Marvels Epilogue” #1 one-shot has been released. The image shows the X-Men from the “All-New, All-Different X-Men” era in 1970s New York, visiting the Rockefeller Center where Phil Sheldon visited in the original “Marvels” #1. “Marvels Epilogue” #1 is illustrated by Alex Ross and co-written by Ross with Kurt Busiek.

– The American Library Association has officially approved the first new roundtable in five years called The Graphic Novel and Comics Roundtable. The GNCRT’s first elected-board – including Multiversity Comics’ own Alea Perez – will take office at this year’s Annual Conference and begin to implement a slate of activities that include events, awards, reading lists, and more.

– Marvel Comics have teamed with the NFL to recreate five of the company’s most famous covers, depicting recently drafted players in place of the original characters. You can view the covers here. In other Marvel-related news, editor-in-chief C.B. Cebulski, via his verified Twitter, stated that all Marvel staff were safe and accounted for following a helicopter crash in New York City. The helicopter collided with a high rise in Manhattan directly across the street from the Marvel offices.

– Didier and Damien Brunner’s animation studio, Folivari, have linked with two other European animation production companies, Studiocanal and Canal Plus, to develop a family/pre-teen focused series based on the graphic novel series “The Baker Street Four.” Written by J. B. Dijan and Oliver Legrand with art by David Etien, “The Baker Street Four” books are follow three street urchins befriended by one Sherlock Holmes.

– Sophia Lillis (Nancy Drew and the Hidden Staircase) has been cast in the leading role for the upcoming Netflix series, I Am Not Okay With This. The series is based on the Charles Forsman graphic novel of the same name, and follows a teenage girl as she tries to navigate High School, family, sexuality, and her superpowers. Others cast in I’m Not Okay with This include Wyatt Oleff (It Chapter Two, Guardians of the Galaxy); Sofia Bryant (The Good Wife, The Code); and Kathleen Rose Perkins (You’re The Worst).

– InfoWars, a far-right, conspiracy theory outlet, will pay $15,000 to cartoonist Matt Furie over their use of Pepe the Frog, a character created by Furie. The character was co-opted by various right-wing organizations during the 2016 U.S. Presidential election, and Furie has fought ever since to regain control of the character’s image.

– Last but not least, at last night’s Square Enix press conference at E3, the publisher released the first trailer for their Avengers video game. The trailer and full presentation, which can be watched here and here, unveiled an original storyline that sees the Avengers reassembling five years after failing to prevent a terror attack by Taskmaster on San Francisco (which resulted in Captain America’s death), glimpses of other characters like Hank Pym and Abomination (no sign of Hawkeye yet though), and promises of more playable characters and co-op gameplay. Marvel’s Avengers will be released on PlayStation 4, Xbox One, Microsoft Windows, and Google Stadia on May 15, 2020.