In case you missed it, “2000 AD” comic book artist Nigel Dobbyn passed away aged 56 on Friday. He is remembered for his work on “Sonic the Comic,” “Red Razors,” and “Strontium Dogs.” We also interviewed “Martian Manhunter” writer Steve Orlando, and have an exclusive preview of BOOM!’s “Strange Skies Over Berlin” #1. 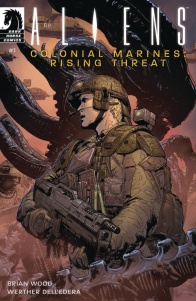 Following these allegations, The Beat reported that Dark Horse Comics “will not pursue any new projects with Brian Wood” and has “cancelled the upcoming series ‘Alien Colonial Marines: Rising Threat.’”

– Newsarama reported on Marvel’s ‘Venom Island’ teaser. The image features a skull in the foreground being enveloped by a symbiote with a darkened island in the background. The teaser also revealed that writer Donny Cates will be joined by artist Mark Bagley (“Ultimate Spider-Man”). ‘Venom Island’ will follow ‘Absolute Carnage’ and is expected to start in “Venom” #21 in December.

–  Comic book artist and now film director Igor Tuveri (who goes by Igort) premiered an adaptation of his graphic novel “5 is the Perfect Number” at the Venice International Film Festival. The film stars Tony Servillo (Loro) as a Neapolitan hitman who comes out of retirement to avenge his son’s murder. You can read a review of the film at Variety magazine.

– Anime News Network reported on the Uzumaki anime teaser. The four episode series is an adaptation of artist Junji Ito’s horror manga “Uzumaki” that ran from 1998-1999, which told the story of the inhabitants of a town where grotesque incidents – all involving spirals – begin occurring one after the other. Adult Swim’s Toonami will be premiering the four episode series in 2020.

– ICv2 is reporting that Diamond Comic Distributors is no longer taking orders for the first two issues of the Ablaze-published “The Cimmerian: Queen of the Black Coast.” The “uncensored” Conan series is being stalled after Diamond received a cease-and-desist notice from owners of the Conan publishing rights. The series is a reprint of the French publisher Glenat’s bande dessinee, where Conan has entered public domain. Marvel Comics has currently licensed the comic book publishing rights to Conan in the US from Conan Properties International.

– Finally, Hudson Valley One reported that the town board of Saugerties, New York is honoring comic book artist and Saugerties native Joe Sinnott with a day of recognition. “Joltin’ Joe” Sinnott, who is retiring after 69 years in comics, is best remembered for his work with Marvel Comics inking Jack Kirby’s pencils on “Fantastic Four.” His last work was inking “The Amazing Spider-Man” strip in March 2019. He is 92.