In case you missed it, “Asterix” translator Anthea Bell has died aged 82; we talked to Joshua Williamson and Katy Rex and Liana Kangas at New York Comic Con; and this month’s Mignolaversity gives us January’s solicitations, as well as a tribute to a dearly departed “Hellboy” fan. 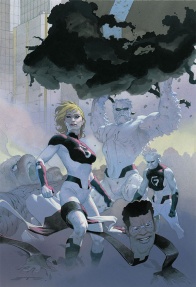 – Marvel have updated their forthcoming releases: Sara Pichelli will no longer illustrate November’s “Fantastic Four” #4 after the third issue was delayed, and has been replaced by Stefano Caselli (“West Coast Avengers”). Aaron Kuder will take over illustrating the title full-time from December’s #5. Meanwhile, “Return of Wolverine” #4 and “Ironheart” #2 have both been delayed from December to January.

– Paste magazine exclusively shared one of the stories featured in the upcoming sci-fi anthology book, “All We Ever Wanted: Stories of a Better World,” edited by Matt Miner, Eric Palicki and Tyler Chin-Tanner. The free story, ‘The Investor’s Daughter,’ was written by Lucia Fasano, drawn by Tess Fowler, colored by Gab Contreras and lettered by Taylor Esposito. The anthology will also feature 23 other stories by Robbi Rodriguez, Eliot Rahal, Chris Visions, Dean Trippe, Erik Donovan, Liana Kangas and many more, written with a positive outlook on the future, rather than what some other sci-fi books offer. Solicited as “the perfect gift to lift spirits this holiday season,” the anthology is up for preorder with a release date of December 12th.

– Actress Maxim Roy (Shadowhunters: The Mortal Instruments), has been cast in a recurring role in Netflix’s October Faction. Based on IDW’s comic series by Steve Niles and Damien Worm, October Faction follows two globetrotting monster hunters Fred and Deloris Allen, who return to New York after their father’s death with their children, and must adjust to family life in a small town setting, only to find their new town isn’t what it seems. Roy will play the part of Alice Harlow, a powerful warlock. Other cast members include Tamara Taylor, J.C. MacKenzie, Wendy Crewson, Megan Follows, Aurora Burghard, Gabriel Darku and Stephen McHattie. October Faction hits Netflix in 2019.

– Supergirl has revealed they are looking to cast the iconic DC villain, Lex Luthor. The villain will have a ‘recurring’ role in season four. “We’ve talked about having Lex on the show since its inception and we’re excited to have him finally arrive,” executive producers Robert L. Rovner and Jessica Queller commented. In addition to Lex, Supergirl will also be bringing back Tyler Hoechlin’s Superman and introduce Lois Lane (Elizabeth Tulloch) in this year’s Arrowverse crossover “Elseworlds.” This will be the first time Lex Luthor has been seen in a live-action TV series since Smallville‘s Michael Rosenbaum.

– According to Production Weekly, Marvel Studios have pushed back the start of production on Guardians of the Galaxy Vol.3  to February 2021. Marvel have yet to find a director to replace James Gunn, who they fired earlier this year, they will however (according to Gunn’s brother Sean) still use his script. The movie’s working title will be ‘Hot Christmas.’

– Anime fans, Crunchyroll and Funimation are ending their partnership, which will be coming to an end in November this year. Crunchyroll released a statement which read: “Unfortunately, Funimation has decided to go their separate way, and this partnership will be winding down on Friday, November 9th.” This means the content that was shared between Crunchyroll and Funimation will stop, Crunchyroll will however still simulcast titles like Attack on Titan and My Hero Academia. The two companies had worked together since September 2016, sharing each other’s catalogs. Crunchyroll stressed “We’re honored to be your favorite source for anime and will continue to do our best in delivering you, your favorite series at the speed of Japan.”

– Finally, Marvel have announced an interactive Ant-Man and the Wasp attraction, Ant-Man and the Wasp: Nano Battle! will open at Hong Kong Disneyland Resort in March 2019. The attraction will feature Paul Rudd and Evangeline Lilly, and allow guests to team up with their characters against Arnim Zola and a swarm of Hydra-bots.

Welcome back to The Rundown, our daily breakdown on comic news stories we missed from the previous day. Have a link to share? Email our team at rundown@multiversitycomics.com.In case you missed it, Henry Martin, a cartoonist at The New Yorker, passed away age 94.– Artist Mirka Andolfo (“Hex Wives,” “Mercy”) has signed a deal with […]

Welcome back to The Rundown, our daily breakdown on comic news stories we missed from the previous day. Have a link to share? Email our team at rundown@multiversitycomics.com.In case you missed it, “The Far Side” creator Gary Larson has returned with new cartoons, posted on his recently launched website.– Award-winning writer Saladin Ahmed is teaming […]