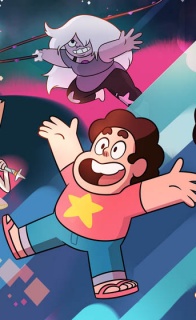 – The increasingly popular and wuvable Steven Universe is returning to comics this February in a new miniseries from kaboom!, written by Josceline Fenton with art by Chrystin Garland. The first series suffered, I think, because not enough of the Steven Universe universe had been established, and the whole thing felt trivial and silly while its source material continued to get heavier and heavier. Now, with its mythology and tone locked firmly in place, maybe this new series could approach the splendor of the Ryan North/Shelli Parloine/Braden Lamb run on “Adventure Time” or the overall charm of “Over the Garden Wall.”

– The Peanuts Movie the first Peanuts movie in 35 years, opened strong with a $45 million box office total for the weekend. It came in second place, behind the new James Bond movie, Spectre. The film, based off the comic strip by Charles Schulz, continues the tradition of having an animated movie open against a new Bond flick. Don’t forget to check out our retrospective on “Peanuts” by Paul Lai.

– Producer Charles Roven, who’s been working on the DC feature movies from as far back as Batman Begins gives an interesting interview about the ipso facto “Brain Trust” of the DC movie universe. He lists Warner Bros. executive vice president, John Berg, the Snyders, himself, and Geoff Johns as the ones responsible for the direction of the DC movies. He also claims that the director on any given project will also influence the direction of the movie, as Warner Bros. prides itself on being a filmmaker-driven studio. For even as rough as Man of Steel might be, or as goofy Suicide Squad and Dawn of Justice look, I’m still glad there’s no Kevin Feige-like figure spearheading the DC movies. But I wonder how Warners has been able to do the Harry Potter movies so well but not translate that to their superhero fare.

– Christmas is perhaps the second biggest event of this season (after, of course, Star Wars Episode VII: The Force Awakens, and DC is prepared to deck you out for all your ugly sweater party needs in some snazzy holiday sweaters. I mean, they’re like the perfect dad-bod accessory.

– Heidi MacDonald wrote this great essay examining how cartoonists are starting to earn revenue and better exposure by working on animated TV shows like Adventure Time (the best show on TV), Bojack Horseman, Steven Universe, and Wander Over Yonder. These shows generally seek out strong, distinct voices: it’s no wonder that animated TV has been so exciting recently, and admittedly, I’ve discovered a lot of cool talent by just watching the end credits of any given Adventure Time episode.

By the way, Luke Pearson (of the “Hilda” series from Flying Eye Books) and Emily Partridge wrote and storyboarded the latest episode of Adventure Time, “Football,” which you should go check out.

– Finally, in Webcomics Worth Clicking: “Mis(h)adra” by Iasmin Omar Ata recently concluded. A gorgeously illustrated comic about a boy named Isaac dealing with epilepsy — both the onslaught of sudden seizures and the general culture around them — this story is powerful and heart-wrenching. Ata was also recently interviewed on the consistently excellent podcast, Inkstuds, by Sloane Leong (“From Under Mountains); that’s also worth checking out.