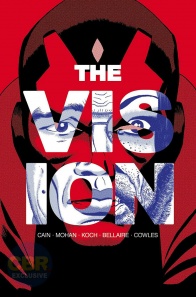 Marvel Comics announced today that it’s canceling plans to publish “The Vision,” a new 6-issue mini-series that was scheduled to arrive on shelves November 7th.

The book, announced at San Diego Comic Con International 2018, signaled Chelsea Cain’s return to writing for Marvel. She left comics seemingly for good after the cancellation of “Mockingbird” in 2016 after eight issues, and the social media harassment she suffered in the wake of the book’s ending. She was to co-write the story with her husband Marc Mohan, whom she also collaborated with on Does This Cape Make Me Look Fat?, and it was to be illustrated by Aud Koch, who worked on “Ultimates 2,” “America,” and “The Wicked + The Divine 1923.”

The announcement of “The Vision” came on the heels of Cain’s return to comics with “Man-Eaters” from Image, which arrives September 26th. “The Vision” mini-series was going to follow up on the critically acclaimed 12-issue run by Tom King and Gabriel Wada. The solicitation for the first issue follows for those who missed it in July:

THE VISION #1 (OF 6)
CHELSEA CAIN & MARC MOHAN (W) • AUD KOCH (A)
Cover by MARCOS MARTIN
VARIANT COVER BY GABRIEL H. WALTA
REMASTERED VARIANT COVER BY PAUL SMITH
BLACK AND WHITE REMASTERED VARIANT COVER BY PAUL SMITH
VARIANT COVER BY DALE KEOWN
THE NEXT CHAPTER OF THE VISION FAMILY!
When the Vision decided to try to live a “normal” life, he built a wife, a son and a daughter – a family – only to watch it nearly all crumble. Now all that’s left is Viv, his learning-to-be-rebellious daughter, and Sparky, the family robo-dog. But what does it mean for an artificial intelligence to rebel? And can a synthezoid father handle single parenthood? The married writing team of Chelsea Cain (Mockingbird) and Marc Mohan joins rising star artist Aud Koch for a new take on the Vision family that will once again have everyone talking!
32 PGS./Rated T+ …$3.99