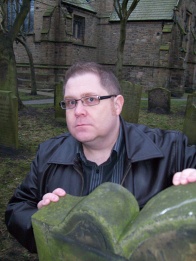 British writer Tommy Donbavand, best known for creating the Scream Street book series and writing the comic strip “The Beano,” died yesterday, aged 53 after a battle with cancer. The news was reported on Donbavand’s website by his friend Barry, who paid tribute to his “kind, funny, courageous, ridiculous friend,” by relaying that Donbavand’s “last act on this Earth was to crack a joke. His last instinct was to put a smile on the face of a relative stranger.”

Tommy Donbavand was born in 1966 in Liverpool. Throughout his career, Donbavand occupied multiple different jobs, varying from a clown and a holiday entertainer, to being involved in theatre productions as a writer, producer and director. His plays Hey Diddle Diddle and Rumplestiltskin were performed around the UK for children. In 2006 his career as author started at Egmont, where he wrote the Too Ghoul For School series under the name B. Strange. Two years later, the success of the series led to one of Donbavand’s most prolific works, Scream Street, being published at Walker Books and by Candlewick Press in the US. The books were adapted into a television series by CBBC in 2015. In addition to this, Donbavand wrote for “The Beano,” writing stories starring the Bash Street Kids and Bananaman.

In March 2016, Donbavand was diagnosed with stage four, inoperable throat cancer and started a blog, Tommy V Cancer which documented his battle with the disease. He adapted the blog posts and collected them in a book, Tommy v Cancer: One Man’s Battle Against The Big C to further share his experiences with others. The book was published in 2017. After being diagnosed with cancer for a second time in 2018, he published a second book, further chronicling his ongoing battle. Late last year, he reopened his crowdfunding page to help support his family.

Tommy Donbavand is survived by his wife and his two sons.

Cartoon Brew reports Roman Arambula, the Mexican cartoonist and illustrator best known for his 15-year tenure on the “Mickey Mouse” comic strip, died following a heart attack on March 19, 2020. He was 83.Arambula was born in Guadalajara on September 18, 1936. He graduated from the National Autonomous University of Mexico after studying drawing and […]

The Agence France-Presse reports Albert Uderzo, the artist who created the “Asterix” series with writer René Goscinny, has died at the age of 92. “Albert Uderzo died in his sleep at his home in Neuilly, after a heart attack that was not linked to the coronavirus,” his son-in-law Bernard de Choisy told the AFP.Uderzo was […]

The San Diego Comic Fest reports Golden Age artist Allen ‘Al’ Bellman has died at the age of 95, following a short illness.Bellman was born on June 5, 1924 in New York City, and first got involved with comics when he bought a copy of “Action Comics” #1 in 1938. Following this, Bellman was hooked […]