This week the guys dive into a work that, courtesy of the good folks at Humanoids, was translated and released in English earlier this year. From the incredibly inventive minds of Pierre Gabus and Romuald Reutimann, District 14 is a comic that pushes convention and genre into all sorts of new places. Part noir, part sci-fi epic, and with a cast of both humans and funny animals, District 14 is the tale of an elephant named Michael who has recently immigrated to Distict 14 and is confronted with all the drama and absurdity contained within its walls. Nothing is ever as simple as it seems, especially when it comes to Michael and his newly minted friend Hector McKeagh, a beaver who is also the most notorious reporter in town. District 14 is a comic that can work on a purely fantasy level, while also smartly commenting on some of today’s social issues. Wealth, corruption, fame, and the press are just a few examples of the topics reflected on in this work. This volume, the first in a series, is well worth every comics fan’s time. The concept and writing is exceptional, and the art is gorgeous. It’s available digitally as well as in hardcover, and it comes with the RFT gold seal of approval. 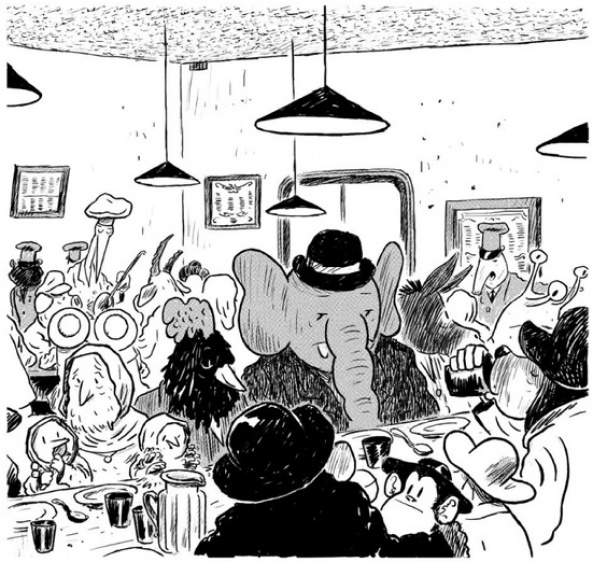 Robots From Tomorrow is a weekly comics podcast recorded deep beneath the Earth’s surface. You can subscribe to it via iTunes or through the RSS feed at RobotsFromTomorrow.com. You can also follow Mike and Greg on Twitter. Music is John Hughes by Anamanaguchi. Enjoy your funny books.

This episode was originally broadcast on June 2, 2016.The lads celebrate 300 episodes by finally talking about a creator never before mentioned on the show: Mike Mignola! All kidding aside, this episode finds Mike & Greg in immediate post-Hellboy in Hell #10 territory, as the final issue hit stands mere hours before the tape started […]

Need suggestions for your LCS trip this week? Let Mike & Greg point out the books hitting shelves on Wednesday they’re most excited about in this four hundred fifteenth installment of their ongoing “Pull List” series! These episodes are the perfect way for anyone to kick off their comics: from the most curious newcomer to […]

The comics window-shopping continues! Flipping to the front of the catalog, Mike & Greg’s attention focuses on the Premier Publishers section: Dark Horse! DC! Image! IDW! Marvel! What’s coming to comic shops in May (and beyond) from these companies that catches the lads’ fancies? Definitely something for everyone as the lads close out their trip […]