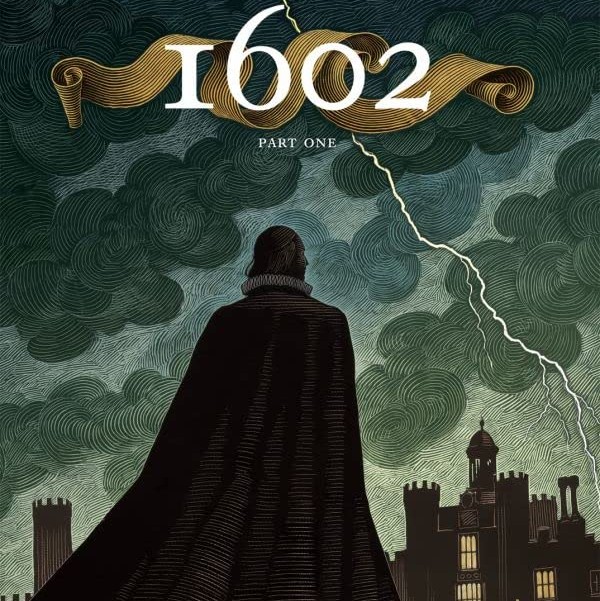 When acclaimed “Sandman” creator Neil Gaiman announced he would recreate the Marvel Universe, the comic book community was astounded back in 2010. Partnering with Andy Kubert and Richard Isanove, what followed was “1602,” a sprawling re-imaginaning of the House of Ideas. 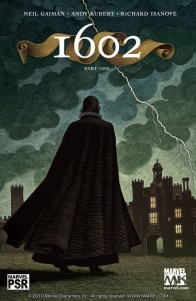 The year is 1602, and strange things are stirring in England. In the service of Queen Elizabeth, court magician Dr. Stephen Strange senses that the bizarre weather plaguing the skies above is not of natural origin. Her majesty’s premier spy, Sir Nicholas Fury, fends off an assassination attempt on the Queen by winged warriors rumored to be in service to a mad despot named Doom. News is spreading of witchbreed sightings – young men bearing fantastic superhuman powers and abilities. And in the center of the rising chaos is Virginia Dare, a young girl newly arrived from the New World, guarded by a towering Indian warrior. Can Fury and his allies find a connection to these unusual happenings before the whole world ends?

Alternate earths are as much of a staple of comic-book storytelling as capes and super-powers. They have become so commonplace, that often the punch associated with witnessing one’s favourite heroes on different scenarios and roles is lost. However, when the world itself is well-realised, its overall contract, history, and inherent logic, it can produce powerful narrative choices and venues, leaving a mark on the medium’s tapestry.

“1602” surely gets the key aspects on alternate-world building right. In just eight issues, the story demonstrates a complex network of relationships, power balances, societal pendulums, all set within the context of a seventh century England with super-powered characters, good and evil. Note that this review is avoiding the terms superheroes or super villains, as the role these characters assume on this story goes further deeper than that. They are more like political agents on a continental, even global scale, as this Earth is shaped by an element introduced on its history in an unexpected way. But more on that later.

Before going further into Gaiman’s script and plot, much accolade must be given to Kubert on illustrations and Isanove on colors. Kubert really was a wise choice for this story, as he is at the same time so associated with the often-called “Marvel style,” with so many of his character interpretations being usually at the top-of-mind of readers, especially when the series was released. That brings a needed sense familiarity, anchoring the story.

However, that ace would be less of a trumping card if the new designs fell flat. Gladly, they do not, Kubert uses his classic interpretations but shifts them on their heads, from how the X-Men are seen as the “witch-bred,” Thor, Daredevil, and a plethora of characters all have new unique takes on them. The same can be said about settings: taking turn of the seventeenth century England into the landscape of marvels was a complex task, but one that the artist handled very well.

Isanove does an incredible job on “1602” as well. We must recall that this mini-series was produced using a technique of colors being applied directly to the original pencils, instead of the more common approach of pencils-pens-dolors. That technique was being utilised at the time on other Marvel books (“Origins,” “X-Treme X-Men”), to mixed results. Here, the results of the choice add a sense of story book tales, of ancient history to “1602,” which adds to the visual narrative, rather than distracting from it.

Back to Gaiman’s script. It is undeniable how versatile and compelling Neil Gaiman is. His work on “Sandman” is comic book royalty, and his prose work is just as impressive. That said, “1602” suffers from being too much of a good thing, compressed in a limited offering. It is obvious to readers that a lot went into the creation and imagination of the world, but to deliver it all in only eight issues did have an impact of the pacing and on how cluttered the main storyline is presented. In the desire to present a compelling world (and succeeding), Gaiman does not connect as much with each individual character and their individual missions on this world.

That is not to say that there aren’t powerful character arcs. Matthew Murdock, the witch-bred, and Stephen Strange are some of the better realised characters and stories through “1602” and their in-world version ring true to their original selfs, while adhering to this particular world.

Finally, something of a spoiler despite this being a long-released story. Throughout the narrative, readers are asked what is the stone casting all the ripples on the water that is “1602.” The ultimate reveal of who that is – and why – is impressive, and remains a great page turner even to this day. It connects to the very core of the Marvel Universe, to is early DNA of sorts, and rings absolutely true on the context of this story, time period, and world.

All in all, “1602” is well worth the price of admission, from how well-realised the world is, the place each character assumes within it, and on how beautiful the art package is. Its shortcoming on pacing should not prevent readers from appreciating it.

Final Verdict: 8.0 – “1602” is a great example of alternate universe done right, with an interesting backstory being beautifully realised on its pages.