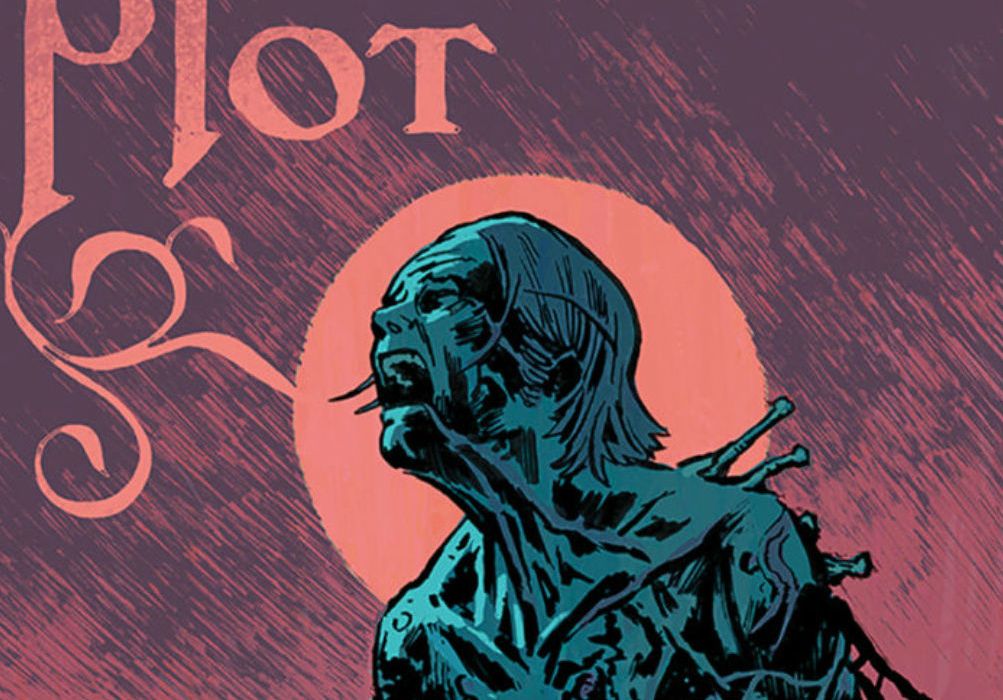 “Nightfall” comes to Vault Comics with “The Plot” #1. Our spoiler-free review follows. 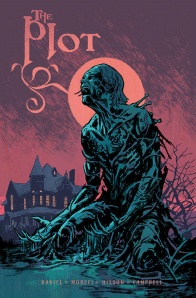 In order to receive… First you must give. When Chase Blaine’s estranged brother and sister-in-law are murdered, he becomes guardian to McKenzie and Zach, the niece and nephew he hardly knows. Seeking stability for the children, Chase moves his newly formed family to his ancestral home in Cape Augusta… which overlooks a deep, black bogland teeming with family secrets.

As the beginning to Vault Comics’s “Nightfall” horror comic book line of series starting at some point from September through December, “The Plot” #1 has a lot to live up to. A name like “Nightfall” indicates writing that focuses in on the light that is darkest just before the break of dawn, the most visceral and primal of terrors. However, though night has fallen, there is no telling that there will be a bright spot after trudging through the pitch-black abyss of wretched nightmares, as despite all hope, there may never be a dawn to these stories. Are the creative team behind “The Plot” #1 prepared for the task of diving so deep into things that go bump in the night and other terrible entities beyond?

In a word, yes. Neither Tim Daniel (“Enormous,” “Fissure”) nor Michael Moreci (“Roche Limit,” “Detective Comics” #982) is a stranger to the horror genre. The two have actually written two other horror comics at Boom Studios in 2015: “Curse” and “Burning Fields,” and the two authors’ crafts reach new heights when it comes to “The Plot.”

What is the eponymous “plot,” exactly? Well, the title of the comic itself can go two ways. On the one hand, we have the Blaine family household, and the plot of land on which it was built in Cape Augusta. In fact, the land itself seems to be… off in some way, as the family seems to have a decidedly negative reaction to being in said land for long. On the other hand, we have the implications of a sinister, perhaps even supernatural plot, or scheme, related to the family and the bogland near which they live. Which of these answers is correct? Both? Neither? Time shall tell, but either way a sinister plot of one sort or another is all but assured to be involved.

Central to “The Plot” #1 is the concept of giving and receiving, and how one has to do the former in order to have the latter occur. While the generosity of the giver can be seen as a benefit to some, when the thing being given is less tangible, such as someone’s wellbeing, sanity, or safety, the implications turn from joyous to terrifying. In essence, the Blaine family’s concept that “In order to receive… first you must give” is intrinsically based not solely on joy, but also on mental illness from giving all one has. Rather than being an altruistic concept, the apparent family motto turns to a take on the concept of everything having a price, no matter how hidden it may seem. The concentration is on what is being given for a result, rather than the result itself.

However, despite the implications of that theme and the title itself, Daniel and Moreci are not telling some twisted tale about the revenge of Shel Silverstein’s The Giving Tree. Instead the focus is on the Blaine family and the three surviving members’ trials and travails, the pain of loss and the horror of the unknown. The Blaine family appears to have a history of mental illness… but what if that illness isn’t just in their heads? What if it comes with the “giving” itself, or is something far more sinister, a curse upon the bloodline itself rather than mundane genetics of certain disorders? Or perhaps it is something in between the two extremes? The various players in the plot of the authors’ story show just enough information to make a number of these possibilities be plausible.

Daniel and Moreci do very well with the introductions of their various characters. Chase Blaine may not be close with his niece Mackenzie nor his nephew Zach, but he appears to try, and each of the Blaines, along with others of the cast, appear to be just real enough to entice readers to know more about the world of “The Plot” and what mysteries may exist around Cape Augusta. The fact that there seems to be some bad blood around the town regarding the Blaine family, and seemingly Chase in particular, further heightens the mystery surrounding the series.

Joshua Hixson’s style on the artwork seems rough at first, but quickly shows itself to be perfect for such an intense, personal horror story like “The Plot” #1. There isn’t a lot of deliberate focus on individual faces unless the emotional responses are important, as if the artist himself is a part of the story, too terrified to provide closer detail. In a sense, Hixson’s natural art style, brought forward from “Shanghai Red,” fits in with the highly stressful environment of “The Plot” #1 while producing a near-tangible air of foreboding about terrors to come, making it technically work it’s way into being into a part of the story itself, from the heightened shadows even in broad daylight to the generally thick-lined artistry overall.

Jordan Boyd brings his coloring work from “Green Lantern: Earth One,” where he showed his skill with emphasizing the oppressive nature of space. Here, those cool, dark color palettes enhance shadows and a feeling of being lost in the dark, making the quieter moments feel all the more prone to induce paranoia in response. The oppressive isolation of the dark makes Boyd’s use of warmer hues in the daylight a significantly stronger source of relief, with exception of the rare point at which the two merge into a disturbingly uncanny pink to provoke a very effective surprised response.

At times, the occasional lack of a defined background works to the story’s advantage, as Boyd and Hixson rely on Jim Campbell’s expertise with lettering to supply sound effects that seem to blend into the color wash, as if out in the distance and out of focus, but close enough to be noticed nonetheless.

Would you know more? Alas, we can only hope to grasp what is happening at this point. And so, the plot thickens.

Final Verdict: 8.75 – When it comes to “The Plot,” it’s fair to say we’re willing to give quite a lot for this first taste of the “Nightfall” line.