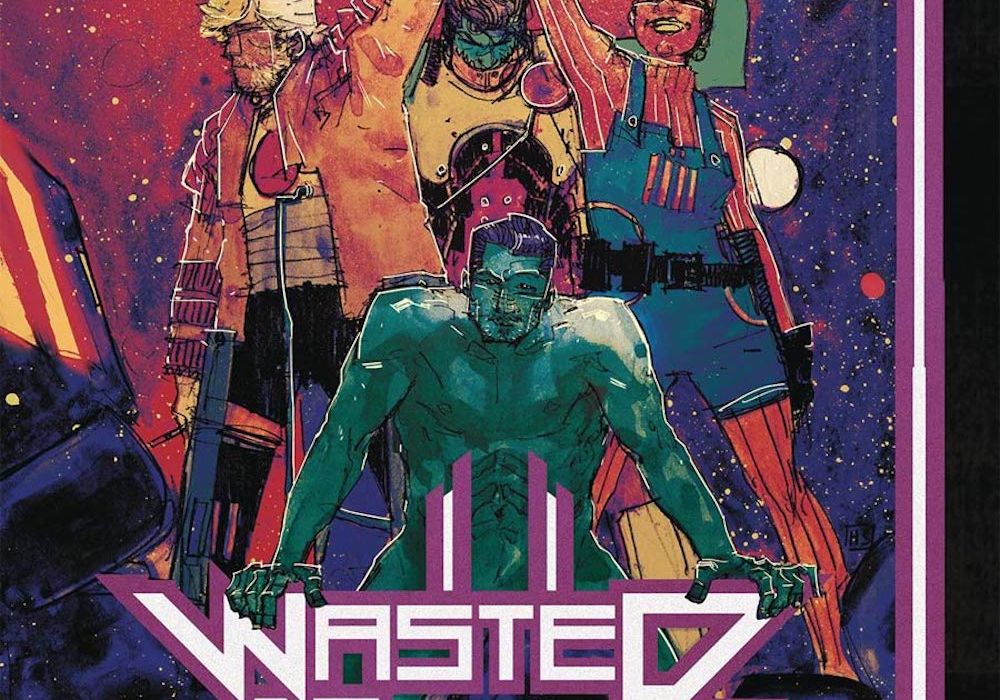 An ex-prophet, a seeress, and two combat-focused carnal robots walk into a politician’s flying house. And that’s before things get weird. Our spoiler-free review follows. 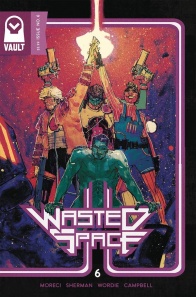 Now officially an ongoing! The whole fam damily is back! Billy visits a crooked politician. Dust and Fury make sweet bot-love in unsanitary locations. A ghost haunts Molly’s visions of Rex. And Legion pets a dog. The galaxy is still totally borked, but maybe together they can un-bork it… oh, probably not.

What do you do when a religion’s prophet gets the feeling he made a bad call? Judging by Michael Moreci’s writing on “Wasted Space,” the answer is probably not entirely legal, definitely blasphemous, and over the top hilarious. The galaxy of “Wasted Space” is dangerous, often salacious, and ripe for many a space western adventure in the process. Totalitarian rule on one hand, chaotic criminal elements on the other, and a protagonist who honestly would probably rather bury himself in a drink again, even if he knows he has to do more. When the “only sane woman” of a crew also happens to be the naïve new arrival to criminal exploits, when the rest of the crew alternate between highly sexual behavior and highly violent behavior (and occasionally both at once), and most importantly when the captain of the crew is one of the most hated people in the entire galaxy for leading it into its current state in the first place, what could possibly go wrong?

Moreci’s writing bounces the various characters’ personalities against one another nigh effortlessly, creating rapid-fire comedy, intense terror, or overall awe depending on the scenario. On top of the fact that he can bounce so deftly from one tone to another, Moreci also shows his ability to avoid decompression in his writing, letting a large part of the story be told in a single issue where other writers may have stretched the visit to “Wasted Space” #6’s setting into a second one.

In spite of being a second arc, Moreci provides ample room for newcomers to jump right on in, with only minimal information actually needed to understand the general idea of what is going on. The basics of what is needed to know about the Creator and those who worship him are made readily evident as soon as possible, but not a lot of focus is spent there, nor on who exactly the characters in play are. Although information on the previous arc can help, it is not strictly necessary, as the writing is fun enough to provide for new arrivals, and the tinges of magic on the edges of the space western give ample opportunity for speculation on what could be done with this galaxy.

The other half of the plot, upon which Moreci focuses much more in comparison to earlier, helps a lot in terms of explaining things to newcomers as well. The divine conflict between the Creator and Legion, two seemingly robotic deities (if they are indeed robots or even deities), is much more tense and serious with its focus on philosophy and the nature of mortal life, but not without its own brand of shockingly black comedy, nor without characters to hate or enjoy. The interaction between these two figures creates an interesting dynamic outside of the space western of the mere mortals down below, one that will hopefully have further expansion as this new ongoing continues.

Hayden Sherman’s artwork is a unique element to “Wasted Space,” its intentional roughness creating a style unlike many other series. The harsh, variably thick linework befits the “broken” nature of the galaxy of “Wasted Space” itself, with faces and backgrounds alike seemingly sketched haphazardly at times. That kind of style is not to say any of it is a bad call, but instead to draw attention to the very thematic use of the lines themselves, with little focus on facial expressions and irregular edges on most shapes in the setting. The fact that Sherman’s close-ups on faces are more intricately drawn with thinner lines showcases how much the rougher, wider images are a kind of “unfocused camera” effect, with consecutive panels possibly having no truly visible face on someone at a distance, while having a worried expression and detailed eyes and mouth the next. In a sense, the lack of focus just goes to further dive into Billy Bane’s borderline (at best) nihilistic mentality.

Sherman shows combat very well in a very short amount of space, essentially turning the fight itself into a background series of panels behind a cool pose for the combatants in front. In doing so, Sherman is capable of giving the paradoxical experience of such a fight being both completely mundane and utterly amazing at the same time.

Jason Wordie’s colors help pull it all together. Using a mixture of colors on each image, be it a background or a pieces of scenery or even individual people, Wordie crafts the appearance of far more depth, be it through realistic blotches of different colors on skin, the way in which shadow or light can fall across a figure, an overall appearance of something being in disuse, or even actual color splatters across a white void to give a semblance of true, beautiful chaos.

As the miniseries becomes an ongoing and the winter continues on, we invite you to kick back and “Get Wasted.” We have a good feeling about this.

Final Verdict: 8.5 – A rough-and-tumble, funny, at times terrifying interplanetary setting greets readers of “Wasted Space” as it continues into an ongoing format.