The Stygian shore awaits in the next installment of Bêlit’s journey. 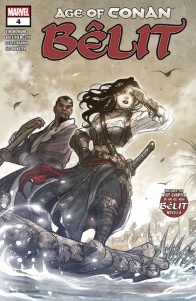 INTO THE DEPTHS OF STYGIA! BÊLIT’s mad quest takes her on a new course…But will the sea monsters she’s been hunting prove to have a deeper connection to her future? N’YAGA returns! But what has he been up to since Bêlit last encountered him? PLUS: The next chapter in the all-new BÊLIT novella, “Bone Whispers” as Bêlit learns the truth behind the mysterious King’s treasure!

“Age of Conan: Bêlit” #4 is not a tale of heroes, but of piracy in the Hyborian Age and the various seafaring nations that come into contact with the eponymous Queen of the Black Coast. Tini Howard seems to be having a lot of fun writing the protagonist’s adventurous lifestyle, her bloody swathe across the Western Ocean. In doing so, she examines two sides of the lead: her ruthlessness and her compassion both.

As shown throughout ‘The Oath,’ Bêlit is a curious mixture of care for her crew and dispassion or hatred for anyone else. On the one hand, actions such as a massacre of surrendering, antagonistic troops for cowardice may be seen as over the top and wholly unnecessary even by the standards of her era, giving heightened credence to the assaults from nations along the Black Coast. The reluctance to accept aid from N’Yaga and unwillingness to give up any command further shows how far into the realm of what modern audiences would call criminal activity she has gone. However, Howard also shows, through Bêlit’s actions, if not her tone, that she does truly care for the people she works with, and, due to her concern for their wellbeing, is worthy of their praise. Howard shows that while Bêlit may be cruel, she may be ruthless, and she may at times act without thinking at all, but none of this makes her an inherently bad person. In fact, one of the charactgers she comes across in a far more highly held profession is in some ways far worse than she when it comes to his subordinates, showcasing the discrepancy between legality and morality, how those lines of law and chaos can be just as telling as good and evil.

N’Yaga acts as, in some ways, an equally important character to Bêlit herself. Narrating a flashback to examine his place in her early life, a large part of “Age of Conan: Bêlit” #4 seems devoted to explaining his place in her story, as the closest advisor to the self-styled “queen.” From a distance, his tale also helps to put Bêlit’s own history into context, showcasing the difficulties that can come from perfectly mundane madness in the family just as often as mystical forces. Even so, N’Yaga acts as a rare voice of reason, dragging up personal relationships to avoid the protagonist throwing herself into harm’s way without enough protection or advice while simultaneously offering just a bit of the supernatural elements of the eponymous “Age of Conan.”

Religion and its connections to magic in the Hyborian Age seems nigh incapable of leading to good things, and Howard plays up the horror of the supernatural for all its worth when at all possible. From the mere possibility of prayer influencing a family to a genuine divine curse of madness, Howard’s writing brings to mind the anti-magical thought processes of the entire Conan epic with only the briefest of moments.

Aided by Scott Hanna, Kate Niemczyk’s artwork is very thickly drawn, especially when it comes to characters. The scenery, from ships to buildings, each are thinner, but when individual people have the focus, Niemczyk makes sure to use a heavy hand. At times, that heavier pencil does seem to get in the way of the emotional depth of the various characters’ facial expressions, forcing Niemczyk to rely upon body movement and implication to how characters act or feel rather than show it. For instance, Vastia’s emotions are shown well in her body language, but the thickness of the lines makes discerning her anguish a bit difficult. Simultaneously, rare close-ups on facial expressions alone, such as Atrahasis’s haunted eyes or a priest’s rage, demonstrate a capability to show such emotional weight, but other images, such as a curious lack of expression at a time of great turmoil, show that such ability is not consistently used. Unfortunately, the eponymous pirate queen has the least focus on how her emotions play into her expression, with Niemczyk overly reliant on other body language to compensate.

Though the artwork may be thick, Jason Keith’s colors help to lessen the dramatic impact, or at least to direct it. Depending upon both the time of day and the mood, Keith is capable of using colors to heighten the way in which emotions are demonstrated. To one end, dark night includes cool colors on cloaks, a navy blue sky, and an overall feeling of loneliness and regret. To the other, warm reds and golds help draw attention to passion for all things, from bloodlust to concern to a desire to assert oneself. Even the Black Coast itself shows some character through colors, as its dark depths are given an appropriately darkened shade of blue when contrasted against the bright sky, both giving meaning to the name and keeping attention on brighter elements on board the Tigress and other ships.

Final Verdict: 7.0– Though well written, “Age of Conan: Bêlit” #4’s artwork may be a bit too heavy for its own good.