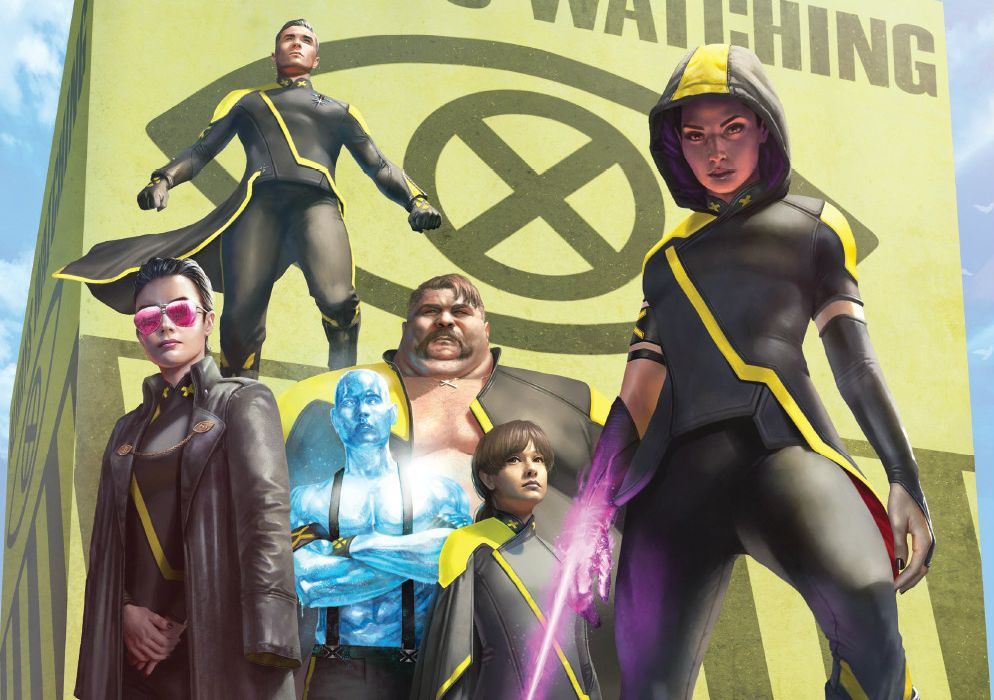 “Age of X-Man” isn’t the first alternate universe/timeline/pocket dimension the X-Men have been in, and it won’t be the last. So let’s take a look at the latest X-event and one of its tie-ins, where we explore what can only be called the Anti-Love Brigade.

Or X-Tremists, or Department X, the main point is, they don’t like love. That provides a good setup for a very interesting comic. 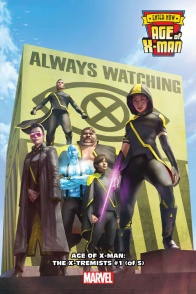 ENTER THE AGE OF X-MAN!
A perfect world doesn’t just…happen. It needs to be cultivated. That’s where the X-Tremists come in. Psylocke, Iceman, Northstar, Blob, Jubilee and Moneta protect people from threats they won’t even know existed, including the most insidious threat of all – love.

One of the oddest parts of X-Man’s supposedly utopian world is the outlawing of love. Not only love, but families altogether – mutants are born in vats at birthing facilities, and even having a sibling is viewed as taboo. It’s an interesting choice for the story, but of course every other issue involves one character or another violating the restriction.

Enter Department X, whose main goal seems to be stopping people from getting their romance on. “Age of X-Man: X-Tremists” gives us a look at the team and their lives, with the first issue taking its time to set up the characters, their dynamics, and what will likely be the main conflict of the mini-series.

We get introduced to the characters pretty quickly, and it’s interesting to see how different they are in this universe from their usual counterparts. Well, some are more different than others. While characters like Jubilee and Psylocke seem more or less unchanged (albeit adapted to this world) we also get characters like Blob, who is now the cheery team leader focused on making sure everyone gets along.

Others, like Iceman, are a bit harder to get a read on. On one hand, he spends half the issue laughing over Jubilee not knowing the difference between a baking sheet and wax paper. Unfortunately, the gag falls just a bit flat as it runs on and repeats itself. After freezing one of their targets, he jokes about using the frozen body as a sled and has to be reminded he’s referring to a person as “it.” Yet he’s also the one to call Moneta out on using the slur “retrograde,” and is clearly using humor to mask his discomfort and nerves. There’s a sense of contradiction there that will likely be explored as the story goes on.

Then there’s Northstar, who spends most of the issue sitting in the van and reading. Although that does serve the purpose of illustrating how nonchalant the team is about their mission and the lack of cohesion they have as a unit.

While the comic does have some action, there’s no actual risk to the characters, which is really the point. They’re a team of powerful mutants out to bring in two people for the crime of being affectionate. Their targets, Nezumi and Luke, are clearly outmatched, so they’re the ones who draw the readers’ sympathy. Even though the Department X characters are the lead characters in the story, it becomes clear that they’re not the good guys that they think they are (the black armbands are also something of a giveaway). It also gives us a good contrast between the characters joking with each other and arguing over who gets shotgun before moving out to arrest and mind-wipe a pair of lovers.

This is not a story about brave heroes battling the forces of evil. It’s a story of characters who believe themselves to be heroes preventing the moral degradation of society, some of whom are about to come to the realization that they’re not as good as they think they are. Writer Leah Williams does a fine job laying the groundwork for that, and it will be interesting to see how the revelations near the end of the issue play out for each of them throughout the rest of the story.

Artistically, I have some mixed feelings. Artist Georges Jeanty, along with inker Roberto Poggi and colorist Jim Charalampidis, do create some great moments. Even a scene with just the characters standing outside the van talking tells us so much about them from the way they’re drawn, from their posture to where they’re looking; it’s great use of body language.

We also get some visually cool scenes, like basically anything Nezumi does; the buildup to Psylocke attacking her with a psychic sword, and the way Nezumi avoids it, is one of my favorite moments in the comic. Plus, it provides me with a line I enjoy probably more than I should: “You parry with your teeth?! How? It’s a psychic sword!”

Similarly, color and shading is put to good use at some key moments. The way the background goes black as Moneta searches Luke’s mind, and how she recoils towards the shadows after seeing his memories of romance, add a nice touch to the scene. Everything is bright and colorful when it needs to be, while still making the most of black backgrounds and shadows at key moments.

For all of that, there are still some parts about the art that don’t quite work, particularly the characters’ faces. Bobby’s laughing face looks a little misshapen, while Jubilee’s facial features don’t always seem the right size.

This is not a problem that’s consistent throughout the issue, but it does occur with enough frequency to be worth noting. While it can occasionally detract from the moment, it’s not a deal-breaker either. It’s just an issue that shows up now and then.

“Age of X-Man: X-Tremists” is not perfect, but it still has plenty going for it. While it does stumble now and then, the characters are well-defined overall, and the artwork keeps things energetic and engaging. It’s starting to tell a story of characters realizing they may not be the heroes protecting order they think they are, and while it’s too soon to say if it will do that, it sets the groundwork well.

Final Verdict: 6.4 – A good start to the tie-in, with solid storytelling and artwork, save for the occasional slight stumble. It may not be a perfect X-Men story, but it’s still a good tie-in to “Age of X-Man.”