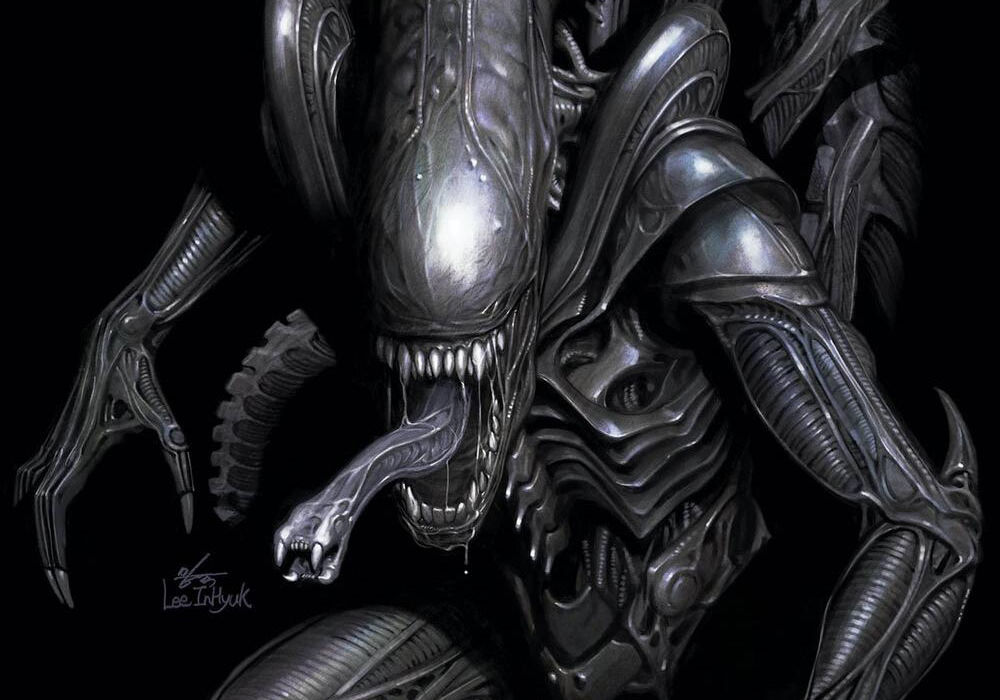 As Marvel begins to make use of Disney’s acquisition of the Alien franchise, what can we expect going forward into this new era of the famous franchise? Read on to find out just our first taste. 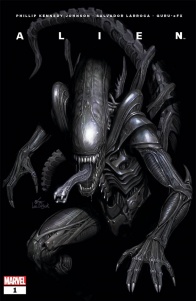 Gabriel Cruz gave his life to Weyland-Yutani–In the case of an alien attack he barely survived, almost literally! Recently retired, Cruz is trying to patch things up with his abandoned son with the help of his friend, a Bishop-model android, but his re-entry into civilian life is not going smoothly…and his encounters with the deadly Xenomorph are far from over. Phillip Kennedy Johnson and Salvador Larroca team up to tell an all-new tale of the titan of horror and science fiction that has scared audiences for decades. No one is safe. No one is innocent. And no one can hear you scream.

After being taken in by Disney’s acquisition of Fox properties, Alien has its first showing in their own takes on it. Rather than a film, our first look at the newer installments in the canon comes straight to Marvel Comics, providing the beginnings of an all-new approach to a saga of four decades and counting first brought forth by Ridley Scott, the late Hans Ruedi “H.R.” Giger, and many more. While Marvel is no stranger to horror, this particular licensed property has a reputation behind it that is at once a trendsetter for much of science fiction horror (potentially to the point of becoming cliché in and of themselves) and a tough act to follow, especially with variable responses to each release in recent years. Given the creative team behind it, how does “Alien” #1 match up to expectations?

Success comes from an effective creative team, and Phillip Kennedy Johnson is very adept when it comes to subjects such as these. While his particular take on horror tends to lean more in the direction of fantasy, such as his work on the Fellspyre Chronicles (first “book,” ‘The Last God,’ recently completed) over at DC Comics’s Black Label imprint, he is able to adapt rather well, as demonstrated in this first installment. Of course, there may be some need to temper our expectations despite his very experienced pedigree, as Johnson does not appear to be in any particular hurry to tell his tale. Much like in “The Last God,” Johnson initially keeps the horror at the back, but in a different way than in that other series. Rather than show the gore in flashbacks or even in the present day, the audience is given hints of what could happen, coupled with their own experience around the Alien multimedia franchise as a whole, with the vast majority of any horror coming from readers’ prior exposure.

Instead, Johnson appears content with taking a slower, longer approach. Rather than concentrate on the xenomorphs themselves, he looks to other facets of the universe: the corruption and corporate greed. There are elements of the franchise as a whole, including certain androids and the goings on around the mega-corporation Weyland-Yutani, but the focus is much more down-to-earth, both literally and figuratively. Similar to many horror films, “Alien” #1 seems to focus on developing the cast before the terror begins. This approach is rather risky, but Johnson’s decision shows a trust in readers’ ability and willingness to follow along for a longer tale as he gives reasons for the audience to care about a group of characters that are likely going to die one by one. Unfortunately, this slow burn may not work for everyone, especially as the book is not exactly newcomer-friendly. The style of the writing, including brief explanations of what happened in the first two films in the synopsis page and little if any exposure to the actual xenomorphs that give the franchise its title, hinges on prior information that is meant to influence audience expectations, but overall it may not work for those who have not had that kind of exposure to the films.

Salvador Larroca is no stranger to horror either, though not always in that exact genre. From the first two arcs of Kieron Gillen’s 2015 run on “Darth Vader” to numerous issues of “Ghost Rider,” he has seen various forms of horrific imagery, along with an intense focus on violence overall, and his work on Christopher Cantwell’s “Doctor Doom” series in 2019 and 2020 demonstrates his ability to give a lot of character depth with minimal ability to actually show faces. Through his art, Larroca has shown capable of emphasizing emotion through deliberate shows of facial expressions or by their complete lack, making one character inhuman versus another being all too erratic, or anything in between. Characters like protagonist Gabriel Cruz can be drawn in a way that makes them appear to be at once pitiable and difficult to empathize with in different ways, and the brief looks at the xenomorphs show them to be at once akin to wild animals and, for lack of a better word, “alien” to the audience. However, the focus of most emotion lies on the interaction between Cruz and his son, each having high emotional stress but dealing with it in different ways. Sometimes, the art is a bit slow to catch up to the emotional weight of what a character is saying, but it seems to work in making them appear a bit “out of it” in terms of dealing with one another.

Guru-eFX is no stranger to coloring monsters of all sorts. From 2003 on “Venom” to 2015’s “Star Wars” to much in between and beyond (including the aforementioned “Doctor Doom” series), he excels in darker settings, using color to emphasize the terrified, broken nature of certain characters and the overall stress that they are under. The color choices may not be as potent as some other series, but they still definitely help to set the scene for issues to come. Time will tell how well he and Larroca can handle the xenomorphs once they are fully revealed in a non-flashback section, but it is easy for readers to have faith in their potential given their experience.

Final Verdict: 7.0– While the artwork is good and the colors complement it well, this story is a bit too focused on returning viewers to be easily accessible for new potential fans to Alien as a whole.