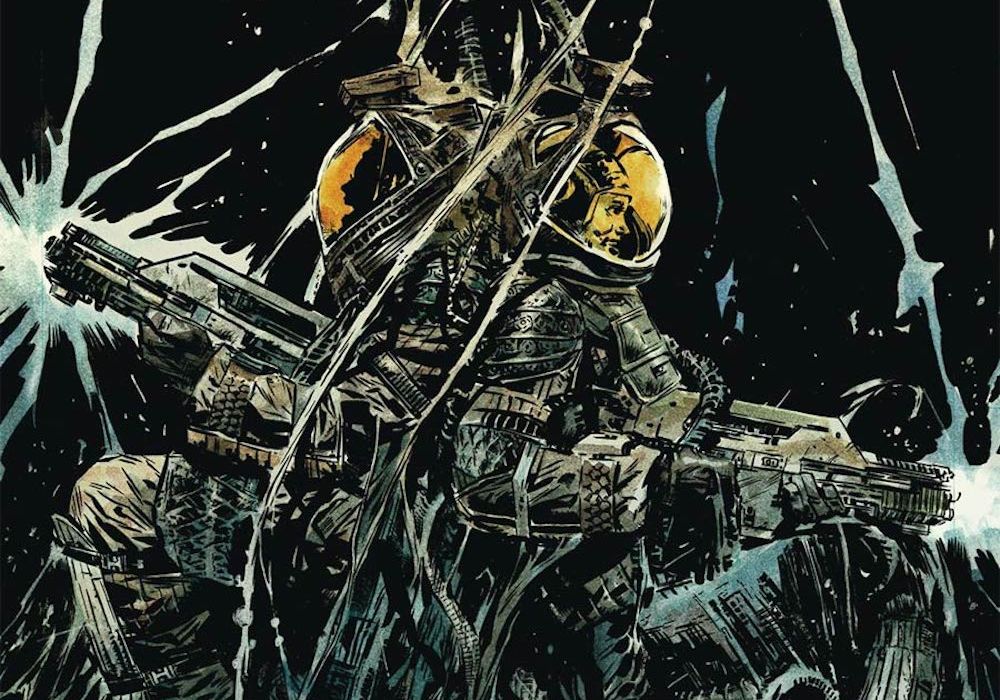 The crossover sequel to 2014’s Alien: Isolation and 2016-2017’s “Aliens: Defiance” continues with the nerve-wracking adventures of Amanda Ripley and Zula Hendricks. 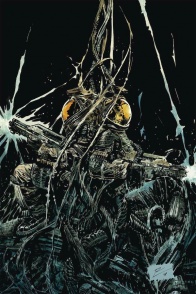 Amanda Ripley and Zula Hendricks make their way to the Weyland-Yutani black site, with the intent to disrupt a xenomorph-based weapons test. Only once they’ve arrived do they realize what is truly at stake, and that they must do whatever it takes to ensure this new technology is never deployed.

Amanda Ripley is back and ready for action!

Following up from the debut issue’s relatively groundbreaking elements, Brian Wood goes through a slower process this time around. Rather than dwell on some of the more expansive elements or even directly deal with the Xenomorphs that give the Alien franchise its name, focus instead is brought upon other elements of the Alien universe that are rather important to the conflict of “Aliens: Resistance.” Much like many of the pieces of Wood’s writing on the “Alien” comics, the slow, quiet moments are fraught with tension, not unlike the franchise that is its source. In a sense, the Xenomorphs are present in their very absence, casting a looming shadow over the entire piece.

Wood spends a lot of time on our main heroines and their own personal struggles and interactions with one another, and with their sapient synthetic being companion Davis One. “Defiance” protagonist Zula Hendricks’s relative confidence in what they can accomplish is used to contrast against Alien: Isolation heroine Amanda Ripley’s internalized uncertainty and hatred of their situation. Even that confidence is used as a contrast against certain elements of Zula’s own character, such as worry over Davis and his actions at certain points.

In a sense, while Hendricks is used as a viewpoint for an “experienced” person (albeit mostly in terms of combat), Wood’s decision to seemingly primarily use Ripley as the narration’s viewpoint helps to put her into the role of an audience surrogate. In spite of her own experience with the Xenomorphs and hostile synthetics, Amanda, much like her mother made famous by the film franchise, is still technically a civilian. She has claustrophobia after the events of her game, feels that things that she does are insane in spite of doing them anyway, and more. Unlike ex-Colonial Marine Hendricks, Ripley is ill equipped to deal with long-standing threats, especially a synthetic weapons program involving Xenomorphs. While readers can root for her tenacity, they also can more easily get into her shoes in the long run, considering her more relatable perspective.

The brief looks into the workings of Weyland-Yutani and their program are intriguing to be sure, but deciding one way or the other on Wood’s execution of their role as a direct antagonist may be too soon to tell. Much like in Wood’s writing on “Aliens: Resistance” #1 for the use of Xenomorph biology in an interesting way, “Aliens: Resistance” #2’s development of newer uses for prototype synthetics offer horrifying implications as to the sheer scope and effectiveness of the program itself far beyond anything the corporation had done before, truly reaching new levels of the science that go beyond “let’s throw a bunch of Xenomorphs around and try to train them.”

Much like the multiple artists on “Aliens: Defiance,” Robert Carey keeps to a very similar style that helps to keep an overall feel for the saga. The artwork is rough and gritty at times, with limited focus on facial expression, but it all works very well toward the overall oppressive atmosphere familiar to the Alien films. Everything feels dirty and used, with the possible exception of the pieces owned by Weyland-Yutani itself. Quite unlike Prometheus or related properties, this look at the time in the “Alien” comics demonstrates just how nasty, how dirty, how downtrodden the entire populace is under the heel of the extremely powerful mega-corporation that serves as a recurring antagonist to the human elements.

Much like the pencils, Dan Jackson provides a dark, dour color scheme to the majority of the piece, setting a depressed, at times near-hopeless mood. Carrying over from his work on “Defiance,” this color palette helps to establish some added continuity between the two series. Furthermore, the darker elements of the artwork become all the more important when pressed up against starkly brighter looks in key scenes, either played for horror or despair at the sudden changes that take place in such bright whites, shocking orange washes, and similar colors.

The main problem with “Aliens: Resistance” #2 comes in the form of Nate Piekos’s lettering style. Speech bubbles lead to one character or another, which is fine, but at times, those quotes carry on to a subsequent page in which the character is not present, the rest of the line being placed in a rectangular box in the corner of the panel. That artistic style would, in and of itself, possibly be okay, but Piekos’s choice compounds upon itself due to the inclusion of two protagonists for this journey, rather than only one in “Defiance” (with Davis as the deuteragonist). With the quotes going from one page to another, coupled with thought bubbles also being presented in a rectangular box in a corner, there seems to be too much thought necessary for readers to understand the very basics of what is going on and who is speaking or thinking. The only real difference between a quote being stated and one being thought, in the case of those bubbles, is the presence or absence of quotation marks around the words, rather than something like a slightly different shape to the bubble or even a different way of showing thoughts or speech. None of this entirely breaks the story, but it is distracting enough to pull people out of its flow on the whole.

Final Verdict: 7.0– Though the slower pacing helps to acclimate new readers to the world of “Alien,” some awkward lettering choices leave much to be desired in terms of clarity.