800 issues, now that is a lot of “Amazing Spider-Man” adventures, but it’s all lead to this. Dan Slott’s run hits its final climax before he says farewell, with multiple artists contributing to this 92-page issue. So how is it? Prepare yourself for the occasional spoiler and read on. 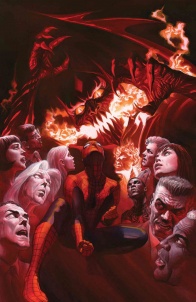 THE MONUMENTAL ANNIVERSARY ISSUE IS HERE TO CONCLUDE “GO DOWN SWINGING!” Dan Slott and Stuart Immomen are joined by many of the artists who made the last 10 years of Spider-Man so Amazing! The biggest Peter Parker/Norman Osborn story of all time unfolds over one oversized story, a scope unmatched in comics! Who lives?! Who dies?! And what scars will Spider-Man bear from here on out?!

Say what you will about Dan Slott, the man knows how to wrap up a run. “Amazing Spider-Man” #800 is a nonstop ride all the way through, bringing in every supporting character he could, creating emotional conflict as well as physical, pushing Spider-Man to the very limits, and even including some great callbacks to the character’s history.

In short, it’s everything a good conclusion should be.

This is an issue steeped in the “Spider-Man” continuity. Using Norman Osborn as the villain is one thing, but combining him with the Carnage symbiote? The Red Goblin may not have the greatest design, but he’s certainly an appropriately intense threat.

Dan Slott utilizes as many characters as he can to their fullest. While last issue did see Clash, Human Torch, Silk, and Miles Morales get more or less taken out of the picture, we still get plenty from Harry and his family, Mary Jane, J. Jonah Jameson, and even one-time foes of Spider-Man like Doctor Octopus (or rather, “The Superior Octopus”) and Venom get to contribute in a meaningful way.

Speaking of Doc Oc, the fact that his appearance has him rescuing Aunt May and defending her at all costs is an amusing callback to the time they were almost married. Yes, he claims it’s because he still has some of Peter’s memories from his time as Superior Spider-Man, but we know their history.

The issue takes Peter on a chase throughout the city, trying to protect everyone from the Red Goblin. There’s a real sense of urgency as we see him just one step behind, and as he struggles to find a way to defeat an enemy who’s stronger than him, knows all his secrets, and carries an intense grudge. Every time he catches up, the action gets more intense and the stakes get higher, as the conflict escalates.

Throughout “Amazing Spider-Man” #800, we get such amazing moments as Spider-Man reuniting with the Venom symbiote (complete with the wing-like webbing under his arms from older designs), J. Jonah Jameson controlling a Spider-Slayer, Harry using a Goblin Glider to attack his evil father, and the last stand of a hero. It continues to grow in awesomeness and intensity from page to page, even as it’s clear how much the unending battle is wearing Peter down.

Of course, no Spider-Man story is complete without plenty of quips. Heroes banter and villains boast, and even the little Goblin Childe gets a line about how May deserves to die for putting raisins in cookies. Dan Slott has been writing these characters long enough to have mastered their voices, and gives everyone some nice lines of dialogue wherever and whenever appropriate.

Admittedly, when Peter gives his big “I’m not alone, my friends are with me” speech, it does feel a little cliche. After all, how many times have we heard characters give the exact same spiel? But it is in the final moments of a fight against the big bad of the arc, and comics are allowed to be a little cliche like that, so it deserves a pass on that one.

After the action, we’re given time to take everything in and feel the effects of all that just went down. There are some heartfelt moments, reflections of loss, and of course, setting the stage for future stories to come. However, it all ends on a good note, even a cinematic one, bringing a proper end to the story arc.

Artistically, there are six different illustrators working on this issue. However, the art style doesn’t make jarring shifts when it switches between them, as most of them are similar enough to blend together well.

Overall, the art is intense and detailed, with great action that fills the pages. Often the smaller panels are clustered together around a large action one, adding to the pacing and intensity. Action lines are rare, in spite of how fast-paced it is, but there’s still a sense of impact behind each hit in the combat scenes.

However, each artist does bring something unique to their part of the story. Nick Bradshaw has more bright scenes, and while his character designs can sometimes feel a bit oddly-shaped, the detail that goes into the scenery is fantastic; one panel gives us Spider-Man just swinging through the city, but the way Nick Bradshaw designs and illustrates every rooftop brings real flavor and character to the city.

Humberto Ramos is a master of framing and composition. We get so many fantastic panels from his section, from Spider-Man sneaking through Alchemax and finding slaughtered security guards to Red Goblin and Venom duking it out. It’s intense, dynamic, and uses some great angles in each panel to enhance the mood. It’s under his pen that we see Spider-Man reunited with the Venom symbiote, and what a return it is.

When Giuseppe Camuncoli takes over, we get some of the best expressions and character work. It’s the little details in each of their faces, like young Normie glancing off to the side when complaining about his brother, or the way Liz raises one eyebrow while making a sarcastic comment about Parker Industries, that adds so much to the voice and personality of everyone he draws.

His artwork also provides some intense action, which include some of the best callbacks to stories from Spider-Man’s past. The action scenes are big, intense, and everything about the way they’re framed and illustrated increases the excitement of the moment.

However, the story comes to its climax with Stuart Immonen, and this issue is his swan song before retirement. As far as issues to end on go, it’s hard to get better than this. “Amazing Spider-Man” #800 provides some of his best work, with sheer intensity radiating off the page in so many moments.

Near the end of the Spider-Man vs Red Goblin fight, we have a scene where the two send off their symbiotes before facing each other down. To see the two pages side by side is to see a master work in parallel structure and dramatic shading effects, as each lets the symbiote go in a different manner (Spider-Man’s reassurance and concern versus the Goblin’s rage and overconfidence) before facing the other directly while backlit by the burning city.

Just looking at each moment is enough to create a true sense of danger, finality, and, well, awesomeness. It’s truly a beautiful scene to behold, and the artwork is equally solid throughout the rest of his section. The detailing, framing, and even the way each panel’s shot is angled are all done with expertise, and he makes great use of shadows and fire to utilize light and dark.

Of course, the color work plays a key role in this as well, and we have Marte Gracia to thank for the colors in Immonen’s pages, which add so much to the intensity of the issue. Edgar Delgado, Java Tartaglia, Munsta Vicente, and Jordie Bellaire provide colors for the rest of the issue, and their choices are all visually pleasing, appropriate to the moment, and bring the illustrations to life.

When things need to cool down after the action, the art shifts to Marcos Martin’s illustrations, accompanied by Munsta Vicente’s color work. It’s much softer, utilizing less in the way of background and facial details to give each page a more calm and quiet sense to it, with lighter colors and shades of blue to contrast with the intense darkness and reds that consumed the rest of the issue. In doing so, the artists allow us to truly absorb everything being said and the emotions the characters are conveying, creating more of a connection to the characters and the moment.

However, we also get the comic equivalent of a post-credits scene, illustrated by Mike Hawthorne, JP Mayer, and Jordie Bellaire. While this scene only serves to set up future arcs and character work, it takes us through Horizon University and all the creative designs within. While the color work is also softer than the majority of the issue, the character and scenery designs contain no small amount of detail and background action, creating the sensation of a bustling and futuristic campus and laboratory.

Each artist adds a unique touch and talent to their section, and the parts they illustrate are matched with their skills excellently. All throughout, they carry on Dan Slott’s story without missing a beat or making any shift feel jarring, creating one intense comic ride throughout the entire issue.

In short, this is one hell of a way to celebrate an 800th issue.

Final Verdict: 8.9 – A fantastic conclusion to the “Go Down Swinging” story arc, with Dan Slott pulling out all the stops, making full use of the supporting cast, and including several timely callbacks to classic Spider-Man stories. Each artist adds a unique touch to their piece, but the issue flows well from one part to the next. A must-read for Spider-Man fans.