Distinct from the latest “Cyber Force,” a different take on “Aphrodite V” rises. 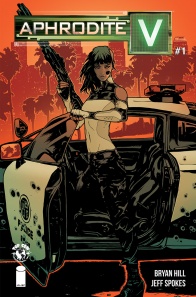 In the near future, Los Angeles is a city on the brink of evolution, struggling with a new wave of terror fueled by black-market technology. Enter Aphrodite V: a fugitive from her masters, seeking individuality and purpose. She is the bleeding edge of biomechanics, and L.A.’s best hope against a new enemy—one that seeks to become a god among machines. One machine wants to destroy the city. Another has come to save it. Only one will survive.

Bryan Hill’s latest take on the Aphrodite Project, a Top Cow Productions creation tied to the likes of Cyber Force and, at times, other mystical beings like the Witchblade, takes a decidedly modern bent to the entire structure, seemingly limiting at least some of the far future technologies to start with. Instead, Hill focuses on the now, on the problems and technologies and society of the modern day first in order to get readers used to the more fantastical concepts that are sure to come later.

From the start, Hill emphasizes that the story of “Aphrodite V” is set in a world that does not necessarily need to be constrained to the conventions set forth by other Top Cow series, due to the nature of the Aphrodite Project. This decision to put the possibility of contradictions front and center is a rather odd one, all things considered, given the fact that the new timeline is very new, only having been published for less than a year, with a somewhat different take on the Aphrodite Project existing in the concurrently published “Cyber Force.” Is Hill trying to just act as preemptive damage control? It matters not, except to say that there is little to no bearing on the Aphrodite in that other series or subsequent Aphrodite models as of yet. Despite the fact that “Aphrodite V” is distinct from the new “Cyber Force,” with the two series being very different in their focus and their creative teams, the similarities are too many to ignore, and will be addressed.

Putting futurist Martin Carver in the role of protagonist, Hill uses a high technology premise to explore a modern world. Plagued by a society that doesn’t want his big ideas, and ideas that are far too big to be plausible, reasonable, or even morally sound, Carver is portrayed as someone far out of his depth and too smart for his own good, with ideas like privatizing law enforcement in his head. While he seems to be portrayed in a sympathetic light, especially when compared to the elderly, overtly abrasive Los Angeles mayor, his high intellect and copious amounts of money do not translate well to interacting well with people and getting his ideas across, let alone having any idea of how to curb his own ideas themselves. Hui-Men serves as his aide and as another rational face, albeit one connected more directly to combat. Hill uses her to emphasize that while Carver is big on ideas, even those close to him realize that he is far out of his depth when dealing with actual people, especially those in authority, and would need to act alone to do anything to change the world as he would like.

The eponymous character of the series, the fifth android to come out of the Aphrodite Project, serves as a secondary character in a sense, making for a far better introduction on the whole. Using an outsider’s point of view, she is able to come across as a more aloof protagonist, while also giving more justification for why the reader may not be fully aware of her capabilities for the time being. Making her into a secondary character seems to, therefore, have been the best possible call for this newest take on the character, and adds a lot of mystique to the project that created her as well as the android herself.

Acting on both the artwork and the colors, Jeff Spokes gives a very particular type of artwork that is similar to, yet different from the art on the separate “Cyber Force” series. Hard pencils make for rough, realistic artwork in the various locales, befitting a “cyberpunk in broad daylight” aesthetic. The color palette even seems somewhat similar to that of “Cyber Force,” with dark living figures against brighter, disorienting lights around them. However, the focus is on the darkness, with some scenes even involving little more than silhouettes against a monochromatic background to emphasize their intensity and ferocity.

In some places, the framing of scenes really makes them. As the standout example, we have the introduction to Aphrodite herself. Whether this was a decision of Spokes or Hill is unknown, but the fight scene is demonstrated as Hui-Men and Carver under attack and trying to fight back, only for a savior from off-panel to shoot the assailant and still speak from off-panel for the majority of the scene. Only in one panel showing an eye is anything shown to the readers, with the full reveal happening only on the last page of this particular scene. With this type of setup, we are introduced to some of her personality and her expertise before we even see what she looks like, and allowed to get into the confusion that our protagonists would have at the sudden heroic rescue.

On the whole, “Aphrodite V” seems to be shaping up to be an interesting look at cybernetics and robotics in a modern day setting, but its focus in on the more mundane elements of reality is what lets the rest shine through the “daylight, modern cyberpunk” vibe.

Final Verdict: 7.5– An interesting look in on the start of a new take on “Aphrodite V,” appealing to modern cyberpunk fans on some level.