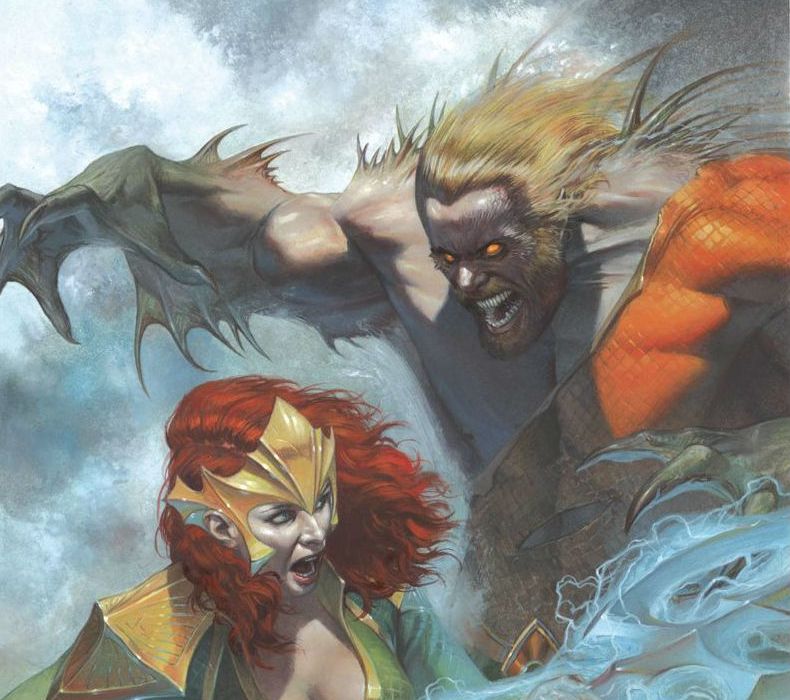 Despite its connection to the upcoming “Justice League” ‘Drowned Earth’ crossover, “Aquaman” 41 still falls prey to its recent shortcomings, that of being unable to move past the themes of Arthur as a failed king and Atlantis as a troubled world power. 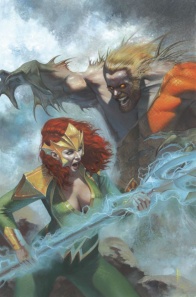 From the pages of JUSTICE LEAGUE, the road to ‘Drowned Earth’ starts here! Aquaman is missing-and the world has gone to hell! With Arthur imprisoned by Black Manta, Queen Mera is left to deal with the arrival of an alien armada aiming to punish the Earth for the sins of Atlantis. As the cosmic tides begin to rise, Mera finds herself in a fight for her very life when the flood unleashes new horrors of the deep!

‘Drowned Earth’ is the new storyline, introduced this week on “Justice League,” where an invading army of cosmic sea gods return to Earth for a full-blown invasion. As can be easily surmised, it is the type of narrative that can only be truly told in comic book form, and one that demands a level of suspension of disbelief to work. Having said that, and acknowledging that “Justice League” was able to walk that thin line, the outcome is not the same in “Aquaman” #41.

Starting with the better portions of the book, that being the art of Medina on pencils and Cifuentes on inks. The pair is very consistent throughout the issue, exploring the situations the scrip offers to render the surfaced Atlantis and its inhabitants. There is a lot to admire, from the anatomy on adults and children (something most artists often overlook, or transform into miniature adults), to the architecture that form the walls and spiral of Atlantis. All characters are distinct and easily recognizable, with their conversations coupled with facial expressions that translate past relationships and individual traits. And while creature design is less-than-inspired – the invading monsters are cut from a similar cloth than recent arcs – it does not hurt the narrative, nor is it a disservice to the overall aesthetics of the book; just a missed opportunity to be a bit more daring.

Where the problems really lie is on script and some of the character’s motivations and dialogue choices. Perhaps the biggest complain longtime readers can make is that this story, or versions of this story, have been told in the pages of “Aquaman” since the beginning of its ‘Rebirth’ era. Atlantis either rises or sinks or becomes trapped, an invading army or internal strife generate civil unrest and the ruling monarch, Mera or Arthur, become the sole hope for survival. It is not a bad storyline on its own, but even when taken as a stand-alone review, it feels tired, as if Abnett is going through the motions this time around, with little concern on making “Aquaman” truly interesting.

In addition to that, “Aquaman” #41, despite its overall need for a suspension of disbelief, forces that boundary with what can only be described as an accommodating script. Readers are to believe that Atlantis, a metropolis so used to invasion and cataclysmic events, does not have defenses against chemical warfare or invading forces. “Atlantis was not built to be water-tight,” says one council member to Mera at a point: while true, it does not translate into Atlantis being defenseless against such a massive bio attack. At another juncture (which shall remain unspoiled on this review), a new ally joins the fray and, once again, it is only by serendipity that the particular location this person is at was unaffected by the attack.

Furthermore, there are some elements that could pull readers off the narrative, either because of how some characters behave and on how the scale of the attack is magnified and minimized at the same time. On the former, Batman fans might cringe on how the caped-crusader interacts with Mera: first, the way that he loses his temper and usual strategic calm flies in the face of how the character is often portrayed, especially in times of crisis. Second, his apparent reliance on happenstance and luck and on the need for Mera or Arthur to save the day is simply hard to see him do. On the invasion itself, “Aquaman” #41 follows the lead of “Justice League” #10 and include some haunting visuals of Earth as a whole being attacked. But the choices it makes on showing the true effects of that in Atlantis, but not in New York (where the issue also spends some time) is confusing: are the water’s effects only at play in Atlantis? And if not, why aren’t those same consequences not portrayed there as well?

Finally, for a book titled after a specific characters like “Aquaman,” one would expect such lead to be featured more prominently. That is, unfortunately, not the case here, where Arthur appears on only one splash page, with guest-stars like Batman being much more in the spotlight than he is. It is jarring to have Aquaman delegated to a spot appearance on his own book and the audience will likely go through the book holding up hope for a stronger role that simply is not there.

Issues that tie-in to major storylines have a tendency to lose its focus and deliver less-than-ideal packages. Unfortunately, the “Aquaman” run by Abnett was hit by not only one of those situations, but with two (the other being the crossover with “Suicide Squad”), just as the writer gets ready to leave the book. The consequences of that are surely felt while reading this issue, seemingly looking like a rehashed plot that relies on convenient script to stay afloat.

Final Verdict 5.0 – An unfortunate beginning to Abnett’s sendoff from “Aquaman,” this tie-in to ‘Drowned Earth’ is not worthy of some of the great stories of this run and offers little to old or new fans alike.