Although the relatively simplistic artwork of “Assassinistas” #2 is not for everyone, the characterizations help to make an interesting story. 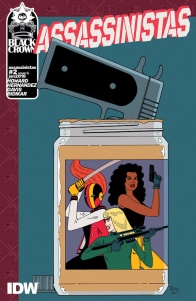 “Pregnant Pauses and Campout Makeouts” Dominic Price is a college-age cutie pie who just wants to spend the semester making out with his boyfriend, Taylor, in between rounds of TurboLight Fighter and maintaining a solidly passable 3.2 GPA. His mom, Octavia, formerly a badass action-movie-quality bounty hunter, didn’t pay his tuition, because she had to get back in the business and spend 40K on black market weapons and body armor And she’s bringing Dominic with her, because the alternative is making lattes for a semester, and he’d rather die. Good thing in mom’s line of work, dying is an option!

Tini Howard shows her prowess with writing groups of people in “Assassinistas” #2. Not only does she handle the past’s version of the Assassinistas, but she also does a good job with the present day cast.

Howard mostly fleshes out the group through descriptions of them individually made by others rather than in their one small scene together in a flashback. The dossiers provided by their enemies, complete with some basic information on their specialties, names, aliases, and a look at their faces, are supplemented by the “dramatis personae” type section in the back of the issue, giving the bare essentials needed to grasp what each person was once good at and potentially still is. Dominic Price, Octavia “Red October” Price, and Taylor’s discussion of the Assassinistas gives both context and a kind of dark humor, from the racial insensitivity of some of the Assassinistas’ modi operandi to comments like them having been “more Charles Manson than Charlie’s Angels.” Furthermore, the fact that the group are described by a member without actually showing them in action gives them a sense of humanity, as Octavia’s time as Red October gives an interesting mixture of acknowledgement of the human side of these bounty hunters and also not reducing their formidable natures. By having most of the characterization come from outside sources, Howard provides the readers with a preexisting state of awe at these legends of the past, both to show how far they potentially fell as they aged and how they otherwise changed.

That isn’t to say there is nothing in the flashback portion. The tactful use of an awkward silence in the action movie-style antics allows Howard to say what the “cravings” of Octavia really mean without needing to spell it out in the dialogue itself.

Howard also provides some fun moments with the present day cast. While the pregnant Charlotte LaCosta has one of the more realistically heart-wrenching moments of the issue with her mood swings, the trio of the Prices and Taylor provide some much needed levity. Taylor, the gung-ho vegetarian pacifist, is an amusing take on the idea of an “internet tough guy,” someone who acts tough until they actually have to make a rather violent mark. Taylor also provides some much-needed meta commentary, such as the fact that all of the Assassinistas seem to have some kind of red motif to their aliases (“Red October,” “Scarlet,” and “Blood Diamond”), leading him to wonder if he should also have some kind of red part in his own chosen callsign. The name he chooses is itself very funny when put into the context of his pacifism as it shows a distinct discrepancy between the two facets for which even the very professional Octavia pauses momentarily. By contrast, Dominic Price seems to be the more serious foil to his boyfriend’s antics, aware of how dangerous the mission is, but still not quite as good as his mother in the field. That isn’t to say Howard deprives him of levity, either, as he jokes with Taylor and even comes up with a rather amusing choice of alias.

Gilbert Hernandez’s has a distinct, minimalistic approach to the artwork. Though there is nearly no shadow and other relatively simple gestures, the entire methodology ties into an idea of cartoonishness over realistic imagery. Hernandez is very good with faces, from the mild irritation of Octavia to the curiosity of Taylor to even the very brief picture of Julien Lee Domino’s madness, and uses these elements to convey the scenes rather well. One particular location of an increased depth is the scenes in which Kyler LaCosta is viewed, with the perspective being from near a running laptop computer. This perspective allows the more two-dimensional scenes to appear as though they were all viewed on such a screen, making it all seem as though it were a “movie within a movie” in a sense. Of course, the style might just not be for certain readers, but it still leaves a notable impression nonetheless.

With his coloring, Rob Davis both helps to flesh out the simpler artwork, with flat coloration to add to a more cartoonish approach. For example, the smoke of a gunshot or a cigarette is rendered as completely opaque, adding an air of mystery while also removing the reader from a sense of “this would happen in reality.” Much like Hernandez, Davis deals in an art style that may not sit well with all readers, but nonetheless works well with the minimalist approach set out by the linework.

In all, the Assassinistas’ story seems to be coming together in a very old-school, violently cartoonish way. From Howard’s writing fleshing out the characters in atypical ways to the minimalist art and color schemes of Hernandez and Davis, this journey is sure to be rather unique.

Final Verdict: 7.0– Howard’s writing, though well thought out, might not be enough to win some people over with Hernandez’s art style, but the whole package does seem to come together rather nicely.