“Avengers” #19 is yet another issue crossing under the ‘War of the Realms’ saga. And while Marvel has really gone all-in with this event, with nearly the entire line becoming involved with it, the firm handle of Jason Aaron adds nuance to peripheral characters, to great success. 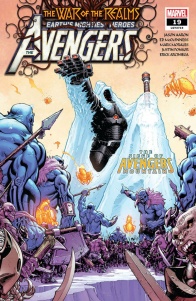 A WAR OF THE REALMS TIE-IN! Avengers Mountain is under siege as the last stronghold of Earth’s heroes is the subject of an all-out assault by the forces of Malekith!

‘War of the Realms’ harkens back to a time where Marvel was truly making line-wide crossovers. That is not to say the publisher hasn’t done events recently (they absolutely have), but this one really touches every corner of the Marvel Universe, to the point it becomes hard to find anything left untouched by it. Reader’s mileage may vary, but it can often detract from the plot lines of each individual series.

Not so here with “Avengers” #19. It certainly helps that Jason Aaron is on writing duties for both the main event and for “Avengers,” but the real quality of this issue is how it chooses to focus on peripheral characters, and peripheral moments of the larger saga. By doing so, it becomes a surprisingly character-focused story, with motivations, emotions, and development taking centre stage. And, even more surprising, for the character of Gorilla Man (that of Agents of Atlas fame, and most recently included on Black Panther’s Agents of Wakanda). Mild spoilers ahead, not on actual reveals, but rather on the attention some plot threads receive.

“Avengers” #19 uses the siege of Avengers’s Mountain to highlight how Ken Hale interacts, feels, and relates to his more famous peers within the team. The story takes Ken through undercover discussions with former antagonists, to deep within the bowels of the Celestial husk the team calls home. In doing so, it reveals his insecurities, his fears, his feeling of being out of place, small even, in the presence of gods and heroes. Mind you, it is not done in any form of self-pitying way, but rather written so well, with such sharp dialogue, that it lands every page.

Ed McGuiness, so much more known for his big action moments and larger-than-life situations, is able to juggle those quieter moments with the fewer battle sequences the script calls for. It is exciting to see the artist’s ability be brought down to these calmer sequences, and interesting on seeing that same flare be applied to dialogue sequences and his anatomic exaggerations being used to further zoom in on emotion. That is not to say that this issue is devoid of action; the actual siege to the Avengers’s headquarters is tremendous, with large cast of characters, all dynamically posed and spread. It is just that the most interesting and even visually innovative sequences are the quieter ones.

Going a little bit more in spoiler territory, “Avengers” #19 is an issue best read twice over, preferably in rapid succession. There is a twist on the very end of the story that essentially reframes the entire issue that came before it, and the audience will appreciate it even more on a second examination. The small hints, the foreshadowing that Aaron and McGuiness have inserted into the preceding pages. It is done subtly, as it should be, so it might just go over readers’s heads on first examination, but become richer the second time around. Really well-balanced and surprisingly revealed.

Finally: this is one of the last works of the late Justin Ponsor as colourist of a comic book (alongside Erick Arciniega). Ponsor has been a constant on Marvel comics on recent months and years, always included on the roster of top-selling comic series and large events. It is bittersweet to see this final collaboration and realise how much at the top of his game he still was. Every energy signature is unique, every costume and armor special and in balance with lighting and one another. His colors always enhance the action and the more emotional moments, never taking the centre stage and allowing the narrative and the overall art to flow dynamically.

At the outset, “Avengers” #19 manages to juggle one of the harder aspects of comic book writing, that of being able to be relevant on a character-related story, in the middle of absurd action. It does so by harnessing beautiful art and bringing it close to that emotion, and infusing it with really sharp dialogue that goes to the essence of its lead and enhances it.

Final Verdict: 8.5 – Without losing sight of big action, “Avengers” #19 zooms in on some of its lesser known characters, and delivers surprising insight and twists to his role on the team and the larger adventures afoot.