How does a man behave and recover after suffering a major emotional loss? What coping mechanisms and unintended consequences does that man go through? Tom King, Lee Weeks and team ask that question about a very particular ‘bat’-man. And by doing so in an unexpected setting, with a refreshing take on the hero versus villain dynamic, have hit gold. 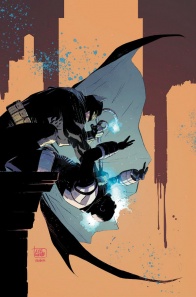 The honeymoon’s over for Bruce Wayne as Gotham City’s most prominent citizen gets selected for jury duty in a chilling court case involving Mr. Freeze! Freeze claims the charges should be dismissed because Batman used excessive force; cue the outrage and media circus. While doing his civic duty, Wayne’s forced to take a hard look at the Dark Knight’s methods. And hey…what is Dick Grayson doing running around the city dressed as Batman?

At this point on his run on “Batman,” Tom King has proven that he is playing the long game with Bruce Wayne, his allies and foes. Issues that might seem disconnected to the broader canvas at first come back to surprise readers, revealing details that certainly play a larger role on the narrative. The beginning of ‘Cold Days’ isn’t likely to be an exception. Dealing with a sequestered Bruce Wayne on jury duty in the present, and showcasing a violent, abusive Batman on the days leading up to (and influencing) the trial, this issue is a juggling act in terms of pacing.

It certainly doesn’t hurt King to have an artist on the caliber of Lee Weeks by his side. There are several areas where Weeks makes “Batman” #51 a gorgeous and fluid issue, first of them on how he chooses to convey the two time periods and situations the main characters are in. Instead of dedicating certain pages to each moment, Weeks overlays them through inventing panel utilization. He is also supported on the effort by the colors of Elizabeth Breitweiser, who adds further nuances and distinction to those shifts. The resulting product is a series of pages that feel like escapes into memories and dreams, as present-day Bruce Wayne recalls the brutality he enacted as Batman not that long ago. Pay close attention to a scene on Gotham’s rooftops, where Breitweiser colors dictate the layout of the bat-signal into a specific hotel room and back. Truly amazing work.

Another aspect of “Batman” #51 that benefits from Weeks’s design can be seen on how he can make even a standard courtroom and jury rooms interesting scenarios by playing around with camera angles, different zooms and proximities and a high level of detail on character expressions and reactions. If these comments seem to lean on a movie review, it is because the entire issue carries itself with the fluidity of some of the best courtroom dramas, complete with props that range from jury room donuts and coffee on the background for further layers.

Finally, Weeks also delivers on how his characters react. Two situations where that can be observed closely is the controlled rage under Gordon’s skin as he is interviewed by the defense attorney, as well as the anything-but-controlled fury Bruce Wayne unleashes in one of the court’s restroom. Readers don’t need anything but to look at their faces to have a full understanding of what is going on.

Over at the script and plot. Perhaps fans will approach this issue with the expectation of a more complete resolution to the so-called ‘wedding of the century.’ There isn’t much of that to be found here, and that is a very wise decision by King. Like in reality, life doesn’t wait for the dust to settle to present another challenge. King offers Wayne and his allies a situation that can extrapolate the frustrations of late, or support the mental recovery process. Readers are kept guessing as “Batman” #51 moved forward, with a last page situation that opens new doors for future issues.

Even taking this issue away from the Batman mythos, it holds surprisingly well as a courtroom drama. Movie fans will likely make the connection to ‘Twelve Angry Men,’ with a Bruce Wayne in an unexpected role, considering who the villain on trial is. Not to be forgotten, fans of Nightwing will also enjoy “Batman” #51 for some of the sequences framed around Bruce’s right-hand man; while small in this particular issue, his role (as a friend and mentee) will surely develop further as ‘Cold Days’ progresses.

All in all, the latest issue of “Batman” takes a wise detour from the specific fallouts of the wedding, rather dealing with the emotional outbreaks on a different setting. Supported by some amazing art, that choice takes the audience to places it may be unused to and where the outcome is just as unexpected.

Final Verdict 8.9 – Such a sharp change of pace might lead to an unbalanced issue in less able hands, but the creative team on “Batman” #51 is anything but. This entry expands on the situations these characters can lend themselves to, while showing beautiful page, panel and character design.