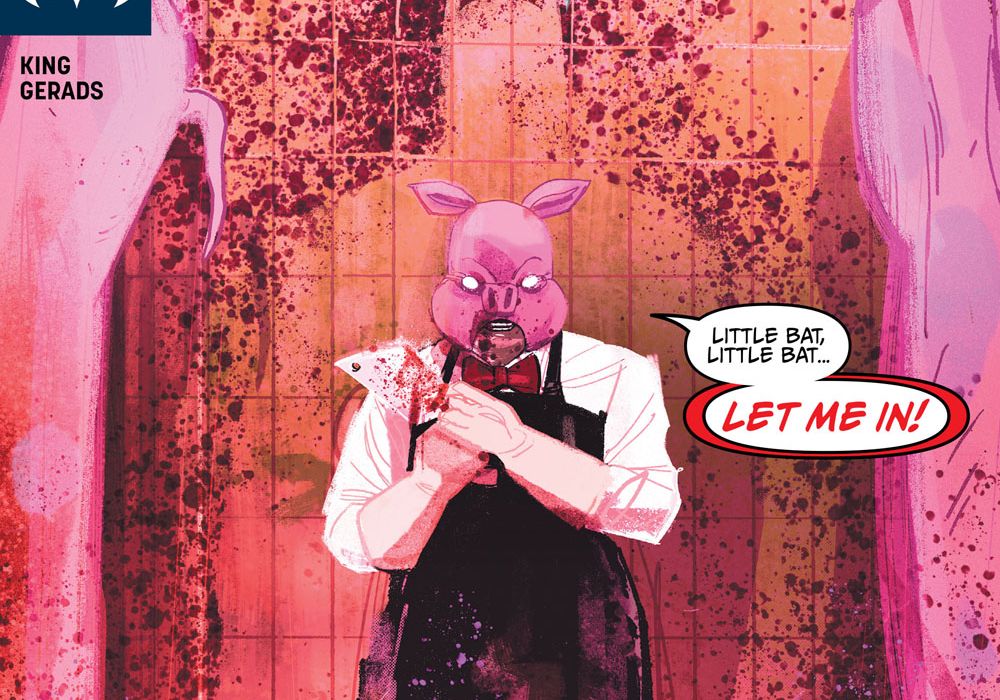 The second installment in a series of interconnected one-shots that make up the “Batman” Knightmares storyline finds Tom King reuniting with Mitch Gerads to deliver an unsettling and visceral chamber piece where the Caped Crusader squares off against the sadist Professor Pyg. But are the events of the story really happening or are they just a window into Bruce Wayne’s crumbling psyche? Either way, it reads like an important inflection point in King’s run. 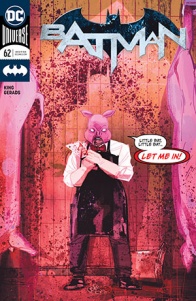 The Eisner-winning creative team behind “Mister Miracle” is back together as artist Mitch Gerads rejoins the Bat team for a special issue! Professor Pyg is loose in Gotham, and you know that means things are going to get weird… and bloody!

King and Gerads’s clear-eyed, symbiotic, and award-winning storytelling continues in this issue and makes this reviewer wish they could be the regular team on DC’s flagship book, even if it meant that the double-shipping schedule had to be foregone to make it happen. As for the larger story developments of the last few issues, King continues to tease, which can be maddening for readers looking for resolution in the larger plot threads. King is clearly building to something earth-shattering for Batman, and King has likely earned a level of consumer confidence that the result will be worth the delayed gratification caused by dovetailing plotlines. If all of the done-in-one stories are as masterfully composed and executed as “Batman” #62, the wait will be highly entertaining even if the payoff fails to deliver the goods. But we’re getting ahead of ourselves here.

“Batman” #62 is a breathless and bloody issue crammed full of subtle homages to recent events. It is more evocative of a dream state than the first installment of the Knightmares sequence. For instance, Batman can’t hear Pyg speak. The floor of the abattoir where the story takes place is bathed with blood, and arterial spray is on every wall. Batman is slow on the draw, taking more time to, as King puts it, evaluate and reassess his situation. King’s trademark repetitions read less like author tics and more like devices for Batman to make sense of this deadly predicament. Reality appears to be as slippery as the crimson floor that Gerads renders beautifully. There is serious digital wizardry going on in these panels. Pyg’s knife glitters and dances across the pages as if it’s the only true light source in the pale and sickly-lit fluorescent room. Dark reflections dance across the surface and ripples cascade out into the panel edges. The art has an almost impressionistic quality while Gerads ratchets up the mood-setting and mood-altering digital effects that he honed in “Mister Miracle.” Enough can’t be said about the way that Gerads makes digital art feel decidedly analog, as if the proceedings are being captured by a manual SLR camera that is just out of focus or has a smudged lens, or an incorrect film speed or aperture opening. Here, Gerads gets a chance to go even darker than he did in “Mister Miracle,” which was punctuated with bloody and violent scenes but not driven by them as this issue of “Batman” is. Seriously, this issue is not for the squeamish.

As modern additions to the Batman mythos go, Professor Pyg is worthy of standing shoulder to shoulder with the other members of the best rogues gallery in comics. Created by Grant Morrison and Andy Kubert in 2007, Pyg is a mutation of the Batman’s own obsessions. His nefarious goals are draped in a skewed worldview, and his penchant for mutilation and violence masquerade as a violently principled mission to achieve physical perfection. Like Bruce, Pyg doggedly pursues a goal that will never be attainable. It’s certainly one of Morrison’s most memorable comic book creations and, thanks to Kubert, the character’s design is as visually striking as it is disturbing. It only makes sense that he should play an essentially role at the center of Batman’s Bane-fueled fever dreams.

Thematically the book picks up the mantle of Morrison’s inspiration for the character of Professor Pyg by making the myth of Pygmalion explicit. In ancient Cyprus, Pygmalion was a legendary sculptor who fell in love with his creation, a marble statue depicting a beautiful woman, and even saw his offerings to Aphrodite reciprocated when she brought his creation to life in gratitude. Here, the myth of Pygmalion is a bit different in Batman’s recollection. For him, the sculptor breathed life into his own creation. Only someone as obsessively single-minded in his self-determination as Batman would choose to frame the story that way. For Batman, there is no divine intervention. There is only will and brainpower and fight. There’s always a way out or through.

While the ultimate meaning of the shocking end to the issue is open for debate, it reveals another tie-in to Morrison’s run with Batman, one that clearly still haunts the Caped Crusader even after this character’s resurrection. Is it simply another reminder of Batman’s inability to protect those he loves or his penchant for driving away those closest to him? The answer is likely yes on both counts, but there’s more. Batman’s central focus of this issue is one that’s common to most dreams. How did I get here? For Batman, the question has never really needed answering. Even tiny babies know how Batman came to don the cowl. The better question for Batman is not how he came to be fighting the latest in a long line of monsters. Rather, it’s how did his noble pursuit go so wrong? This issue doesn’t provide an answer, but as many know, the first step to solving a problem is admitting that there is one. With issue 62, King might finally have Batman ready to admit just that.

Final Verdict: 9.5 – “Batman” #62 is a grisly treat that reveals another clue to the dark depths of Batman’s current mental state. Even as a largely standalone issue, it manages to tower over many in King’s high wire run on its visual audacity alone.