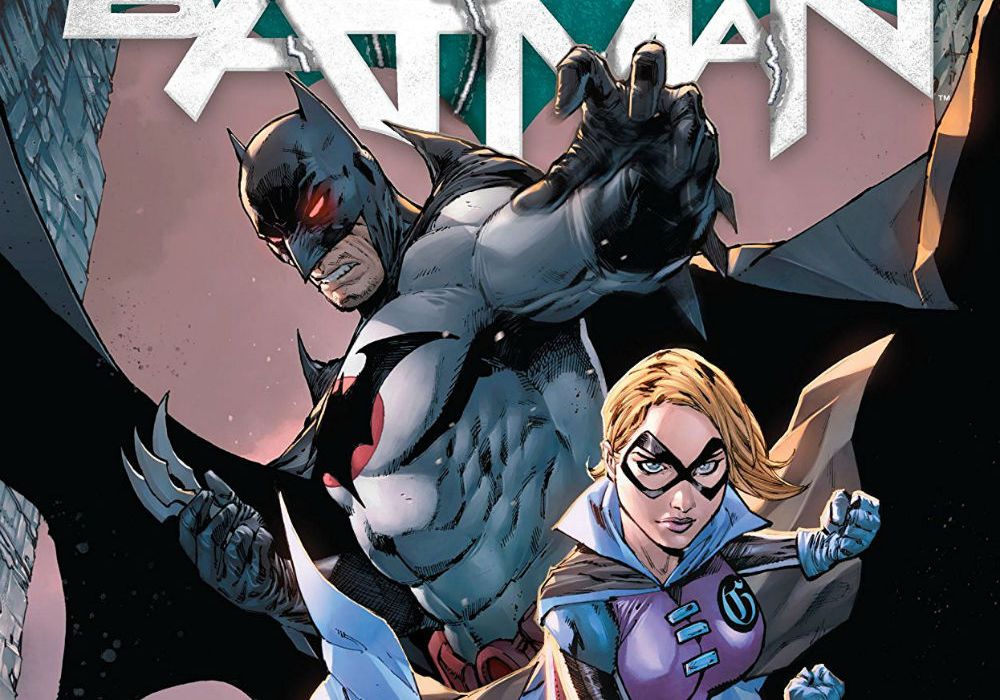 As ‘City of Bane’ continues it’s march to the ending of Tom King’s run on the title, the stakes reach another high, in a greatly paced comic book. Intelligently using two artists for very different beats, this issue is extremely well crafted. 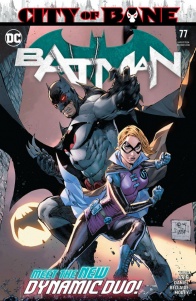 “City of Bane” continues! The last of the independent villains are on the run, leaving Gotham City entirely to Bane and his cronies—including Flashpoint Batman and Gotham Girl! Though this means a semblance of peace on the streets, the iron grip of tyranny is squeezing all life out of Gotham. And with Bane’s machinations keeping other heroes out, the city really needs the Batman to return. Is Bruce Wayne ready to face his toughest foes yet…his father and the man who broke his back?

“Batman” as a series has had its ups and downs in regards to issues that are deliberately slow-paced, with those that move the plot forward at break-neck pace. There haven’t been a lot of issues, though, where the pacing within those twenty-some pages is as strongly constructed as this one. In a progression that will likely hit readers more strongly as the story evolves, “Batman” #77 ends in a very different place from where it started, but not at the cost of not developing the core characters through it all. There will be mild spoilers from here on now, but there will be a final warning before really going into the major reveals further down the line.

Starting with the art, “Batman” #77 is divided in two very distinct places and cast. The first features Bruce Wayne and Selina Kyle reuniting and starting to discuss their next movement and plans. Those take place in brightly-lit Paris. The second focuses on Damian Wayne, as he heads back into Gotham, despite the warnings to stay away from the now para-militaristic controlled grip of Bane. Here is where having two talented artists like Tony Daniel and Mikel Janín does wonders.

Daniel is known for his big action pieces, and sharply defined characters, on a more traditional portrayal of the superhero genre. His linework lends itself better to the far more upbeat moments in Paris, to the facial expressions that Bruce and Selina need to convey as they pick up the pieces of their relationship. Although there are darker moments on this segment, they serve to be the upside to the far more gritty, urban, and depressing sections set in Gotham City.

Talking about that, Janín is perfectly positioned to render the dark alleys, sharp jumps, and intense fight choreography that Damian has to go through, in his attempt to invade Wayne Manor. His style looks dirtier, but without losing a great sense of composition and scale; his city skyline is grand, without losing its oppression.

Over at colors, Bellaire and Morey lend their own style to the specific portions of Janín and Daniel. In particular, the entire sequences set in Gotham have a very neon-based look to it, which serves the purpose of lightning, but without leaving anything out of the shadows. It contributes to the mood brilliantly, all the way up to the climatic ending.

Back to King’s scripts, “Batman” #77 really feels like two issues for the price of you, connecting thematically over the feelings of loss and fighting back. Batman almost takes second feature on this one, as his conversations with Selina will surely pay-off in future issues, but without a direct consequence to the drama happening immediately. From the reader’s point of view, it is intentionally rich to see them debate over certain topics that could certainly wait, had they been aware of the events afoot at Gotham. This way, the readers have the upper hand on the world’s greatest detective, which greatly humanises him.

Now, onto the big finale and some specific comments about it. As it is impossible to comment on certain elements, full spoiler warning in effect. Last warning before going back.

The very end of “Batman” #77 sees Damian facing the consequences of his disobedience in the eyes of Bane and Thomas Wayne. The final two pages of that sequence are a master class on visual story-telling, as Janín entraps both Damian and the readers in tight, tall panels, gradually pulling back to show what really is at play. When the perspective shifts to what Damian is actually seeing, the panel opens up to a complete, horrific page, where Bane claims a victim very dear to the Batman family. What follows is some of the best synesthetic images in recent memory, where the vertical wiring of a light bulb mimics the flatlining of a heart monitor: the “beep” sound nearly audible, given how well executed it is.

There is still more to come in this final ‘City of Bane’ arc. Some of the reveals might be turned into innuendo or false moments. But, at this juncture, “Batman” #77 might be one of the series’s best.

Final Verdict: 8.9 – Expertly crafted, beautifully drawn, and constructed with a clear pacing in mind, “Batman” #77 is a highlight of King’s run.