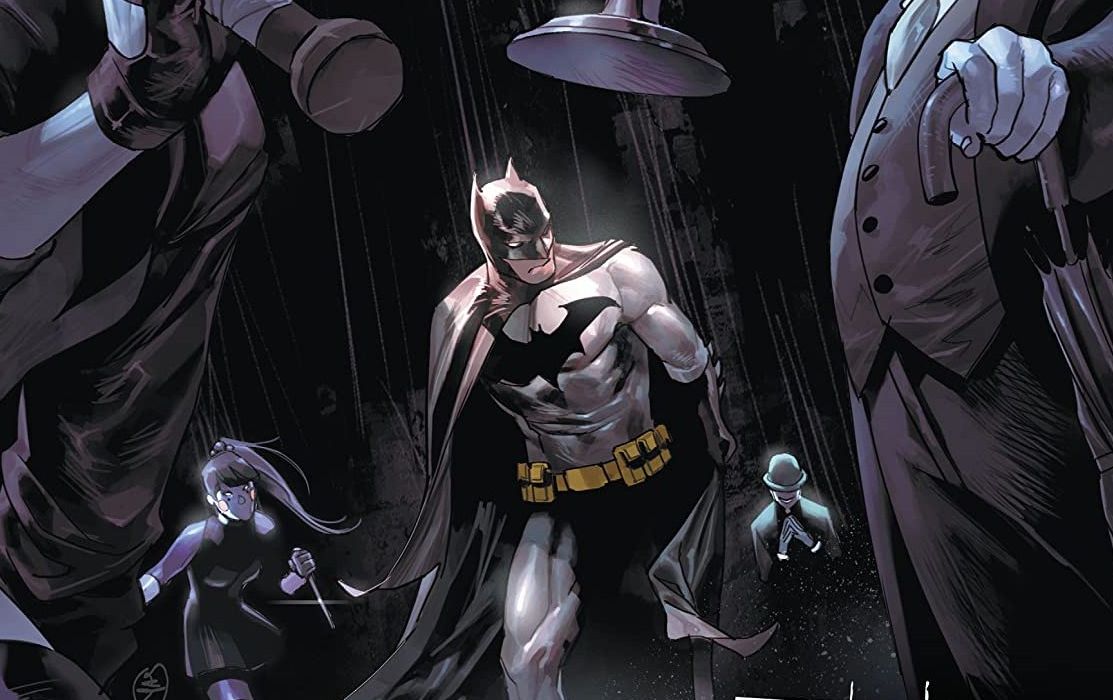 Here’s the Punchline – – literally and figuratively.  While the buzz around “Batman” #92 has been with the Joker’s new partner in business and romance coming face to face with Harley Quinn for the first time, the real punchline is Batman’s versus The Designer – – and what he knows.  Joke’s on the Bat now. Or is it on us? 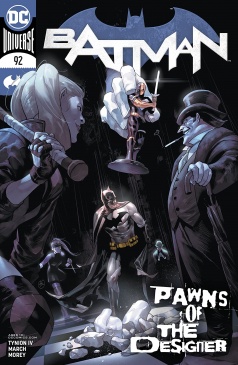 The greatest heist in history is underway in Gotham City, courtesy of the mysterious crimemaster known as the Designer! Batman knows what he needs to do, but in order to stop the plot, he must first escape the most ingenious death trap the Riddler has ever devised!

No matter how amicable the breakup is, meeting the new partner in your ex’s life is going to be awkward. So you have to feel a bit bad for Harley Quinn.  She and temporary BFF Catwoman are working their way through a city on lockdown to get to the Wells Fargo of Gotham’s underworld, which is stressful enough.  Now she’s face to face with the woman who took her place in her beloved Mr. J’s heart.

To be fair, this isn’t the first appearance of Punchline (that was back in “Batman” #89), but it’s the first full appearance of the character, and her first meeting with Harley.  And you have to hop on over to this week’s “The Joker: 80th Anniversary 100-Page Super Spectacular” #1 to get the origin story.  But the looks (and opening blows) those two women exchange, along with Catwoman’s reactions, tell you all you need to know: that this is going to be a Rivalry.  It’s a brief appearance, culminating in the start of a more physical way to fail the Bechdel test, but enough to give you the impression that Harley is very much still not over her ex, and Punchline isn’t going to let the past get in the way of her present and future.

Punchline aside, there’s some other stuff going on in this issue. Gotham City is on lockdown (hey, sound familiar?) with a drugged and strung out Riddler teasing Batman with a series of crossword puzzle clues to unlock the city.  One wrong letter and Gotham is in peril.  This is one crossword you don’t want to do in pen, and Bruce Wayne knows that, outpacing the Riddler as he works his way through the puzzle.  But the Riddler’s working for someone else: the mysterious being known as The Designer, someone who knows Batman is Bruce Wayne (and vice versa) and seems poised to use this information to their very advantage.

It’s been a long hot minute since I’ve dipped into the “Batman” ongoing, so I wasn’t 100 percent sure where this issue was in the current story arc.  Imagine my surprise to find it’s the penultimate chapter of that arc, ‘Their Dark Designs.’  Such a point in any story is logically the worst place for a new or lapsed reader to come on board, but I was able to follow the action quite well.  That’s thanks to James Tynion IV’s effective, simple writing.  He doesn’t rely on the crutch of inside jokes and Easter eggs to other issues that can leave a reader confused, relying on a self-contained story that still ties itself to the larger plan.  Few writers can do that, and fewer still can do it effectively.

Not everything is perfect.  Given that this is setting things up for a finale of the arc next issue, I was expecting a fair bit more tension, which is why I was all the more surprised with just how quick Batman figured out the Riddler’s game. No doubt he’s smart, but there was something too neat and tidy to this resolution.  Blame some of this on lost momentum due to COVID-19, blame poor editing.  It all results in a limp to the finish line.  If me, the casual “Batman” reader is picking up on this, I can only imagine how more devoted readers must feel.

The final page that reveals The Designer to Batman is a textbook example of James Tynion IV’s script and Guillem March’s art working in fine concert.  Body language that is both open and inviting while conveying power and menace and a to-the-point summary of what they have planned for the Batman give you that bit of chill down your spine when you’re in the room with the Bat where it happens.  Now add in the mystery of this man without a face, and you immediately want to know more, even if it unnerves you.

March also plays with perspective quite well, using two very different tactics to provide the same result. Whether it’s on a billboard in the business heart of Gotham or a parlay with Batman, anytime we see Riddler it’s from a worm’s eye point of view, where the eye draws up.  The reader has the sense of power Nygma has over the city, even in his final moments where he realizes Batman’s figured him out.  Contrast this with our straight on view of Punchline when she and Harley meet.  She may have the upper hand in the Joker’s heart, but you – – and Harley – – view her head on, eye to eye, face to face.  And when you’re staring someone right in the eye, no matter how confident you are, you can feel daunted.  Two different visual cues but both resulting in the same character tone: that of control, of might, of domination.

The Joker War is coming, the event that promises to shake Gotham City right to its waterline.  But I’m not feeling totally shook yet.

Final Verdict: 6.3 – Surprisingly accessible at a late point in the story, and the Harley-Punchline meeting works. But devoted readers looking for more tension to build to that promised explosive climax will feel let down.