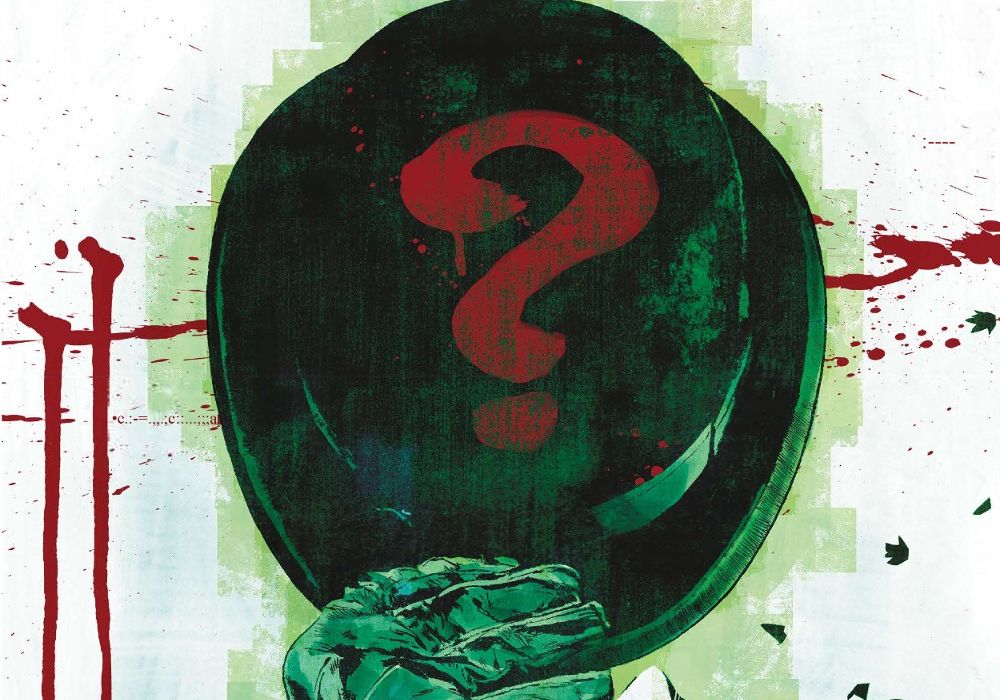 The Joker once claimed that all it takes is “one bad day” to turn a man into him. That’s a claim that’s been debated and debunked frequently (even in “The Killing Joke” itself, when Gordon refused to break), but does it extend to Batman’s villains? Tom King and Mitch Gerads are setting out to explore that in the “One Bad Day” series of one-shots, each focusing on a different Batman villain, so let’s see if the Riddler’s day is really that bad.

Oh, and there will be some spoilers. 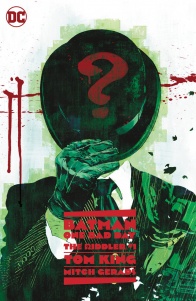 DREADFUL REINS
Tom King and Mitch Gerads, the Eisner Award–winning duo behind Mister Miracle, The Sheriff of Babylon, and Strange Adventures, reunite to dive deep into the mind of Batman’s most intellectual foe… the Riddler. The Riddler has killed a man in broad daylight for seemingly no reason, but…there’s always a reason. The Riddler is always playing a game, there are always rules. Batman will reach his wits’ end trying to figure out the Riddler’s true motivation in this epic psychological thriller; this is not to be missed!

There’s a few things you learn to expect from a comic when Tom King is writing it. Okay, mostly two things. The first is that the majority of the pages will be nine-panel grids. The second is that it will involve or explore trauma in some way or another.

Well, “One Bad Day” absolutely does that, and a lot. But, to be fair, so many of Batman’s rogues (and members of the Bat Family) have a whole lot of trauma to explore, so if there was ever a time or place for it, it’s this. It’s just a matter of if it’s done well and works with the characters.

So, on to the plot! “One Bad Day” is split into two stories. The first follows Batman as he takes on the Riddler, who abandoned his usual M.O. and just… shot a guy in the head. Why? Well, maybe that’s the riddle. And while he does let himself get arrested, it also showcases the kind of threat he can pose just by the virtue of his knowledge (and not just about riddles).

Oh, and this is one of those comics where Batman basically tortures people for information.

The second story is a flashback to his youth as Edward Tierney. There, we see the abuse he suffered at the hands of his overly-strict father, as he was beaten for missing a single question on a test. The question, of course, is a riddle, left by a teacher who decided that making it a part of the test would be a good way to challenge and drive his students.

This teacher, Professor Yellin, is actually one of the most interesting characters, not because he sets Edward on the path to being the Riddler, but because he’s clearly not in the genre he wants to be in. He praises Edward’s intelligence and tries to encourage him, using the riddles on the tests to expand his mind and help him do more thinking than just memorizing and reciting facts. He’s trying to be the cool teacher – the inspirational, motivational type, like the kind you see in movies who turns students’ lives around.

Yet at the same time, he’s so horribly blind to the clear distress that Edward is in, that he seems to honestly think he’s helping, instead of giving Edward’s father more reasons to beat him. It’s a kind of tragic irony that’s used to good effect.

On the other hand, when we see the Riddler carrying out his plan outside of flashbacks, he’s basically achieved a level of intellect that lets him know everything and do anything. He can somehow dodge bullets, then lie down and let armed guards accidentally kill each other. Not only does he know Batman is Bruce Wayne (which is presented as a surprise, even though he’s technically known it since “Hush”) but he’s also figured out the rest of the bat-family’s identities and, apparently, sneaks into Wayne Manor for the kicks. He can blackmail all of Gotham City just by knowing things, to an almost omniscient level.

It’s a bit of a stretch, and doesn’t give us much of what makes the Riddler such an entertaining character. No puzzles, no games of wit, just him using his knowledge (and apparently super stealth skills) to become untouchable. The only mystery is “why did the Riddler shoot this random guy,” while other riddles are just tossed in there throughout the dialogue without providing any major information.

This also makes for a slow-paced story. There’s no big set pieces, although it does make the more violent and bloody scenes land well. Even the scene where Batman is driving in the batmobile and takes down a robber with a well-placed bola is done with no sound effects, keeping the focus on the dialogue from a conversation that took place off-panel instead.

And frankly, all of that is what they’re going for, so it works here.

The panel placement also controls the pacing and the speed; even when it’s not using Tom King’s signature nine-panel grid pages, the panels are all evenly sized and spaced, creating a uniform rhythm and consistent pace from panel to panel. It also uses repetitive images, such as Batman standing still in one spot while the Riddler picks himself up, to good effect for setting the atmosphere and flow.

But that does bring us to the art, and Mitch Gerads is not only talented, but his style is well-suited for Tom King’s story and the general atmosphere it creates. This is no surprise, as the two have collaborated on plenty of comics before, so they’re familiar with each other’s style and can bring out the best of each.

The subtle lines and detailing in Mitch’s illustrations are emphasized by his color work, adding a nice level of rugged depth to the images. And for a comic focused on anger and trauma, his work with characters’ expressions brings all those emotions through nicely. There’s a level of coarseness to it that adds to the atmosphere, especially with the use of shadows and darkness (all quite appropriate for a Batman comic, of course).

The color work mainly relies on two shades: greens for the present (as is fitting the Riddler, since green is his main color scheme), and oranges for the flashbacks. Even when we get a few different colors in there, like yellow jumpsuits and red blood splatter, the main colors are so overwhelming, and the other shades still carry a tint from them. Not only do these color schemes keep the present day and flashback scenes visually distinct, they’re also put to good effect when Batman interrogates Edward’s father, and he’s caught in-between the shades of green and orange to illustrate his place in the story.

In the end, the “One Bad Day” comics are explorations of trauma, and how they drive Batman’s villains. Except… do all of them really need it? Does the Riddler need to have a traumatic reason to drive him to be the smartest person in the room, and completely obsessed with riddles? His backstory didn’t need that extra layer of trauma to make him an interesting character – he was already plenty interesting as it is (and, personally speaking, one of my favorite DC villains). Even then, as far as villain origins go, this feels a tad uninspired.

There are characters (like Batman) whose motivations are entirely driven by childhood trauma, and it works for them, but if “One Bad Day” is going to give everyone a similar backstory, it becomes less meaningful.

And look, none of this is to say that the comic is bad, just that it has some elements that don’t work for me. Fans of Tom King know exactly what they’re going to get from his comics, and an exploration of what makes Batman’s villains tick, based on their worst memories, is a good concept. The story and dialogue are still solid, and the artwork is absolutely deserving of praise. My only issue here is that it doesn’t add anything to the Riddler that makes him more interesting or compelling – if anything, it glazes over the most interesting parts of his character.

So if you’re a fan of Tom King’s exploration of trauma and how it can drive or impact characters, you’ll get a kick out of “Batman: One Bad Day” and this exploration of the Riddler (especially with Mitch Gerad’s artwork). If not, there are plenty of other Riddler stories out there to read.

Final Verdict: 5.9 – “One Bad Day” Tom King in his zone, doing what he does best, and with excellent artwork to boot. But if you’re not a fan of nine-panel grids focused on character trauma, then it’s okay to pass.