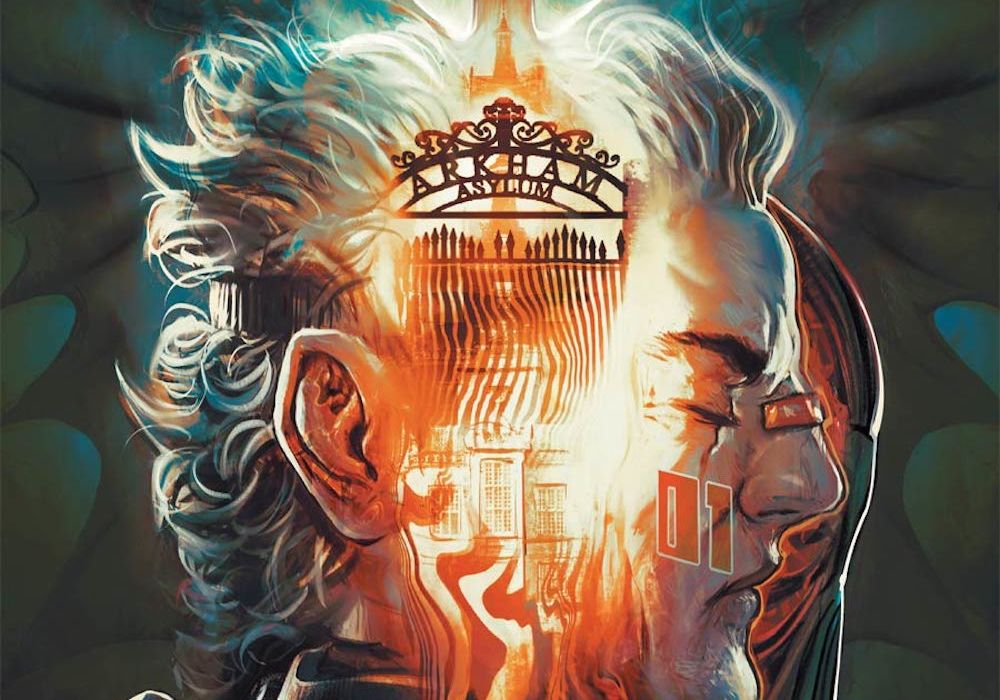 How can a one-shot be used to integrate a new villain effectively into the past and present of an established hero, but still feel as though it would be difficult to pull off in other settings? See in this new ‘Secret File!” 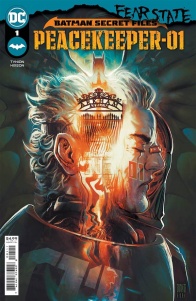 Picking up after the events of Fear State: Alpha, follow Sean Mahoney, a.k.a. Peacekeeper-01, in the wake of his exposure to highly potent Fear Toxin at the hands of the Scarecrow! Now, dosed with terror and facing a lifetime of fear and insecurity, Mahoney has found himself frantically reflecting on his past as a GCPD officer, and then as a prison guard at Arkham Asylum—all while desperately attempting to keep his mind from fracturing. Will Peacekeeper-01 give into fear…or become terror incarnate?

On the whole, the story told by Brisson is not entirely unique. He had had some experience with these origins, such as in another of the one-shots, “Batman Secret Files: Clownhunter” #1, but that character is still based in a different one of Tynion’s events around Gotham. Over at Marvel, Brisson has shown his ability with darker characters, from Logan (the elderly Wolverine) to the Ghost Rider franchise and others, and while Peacekeeper-01 is nowhere near as focused on power as them, the underlying darkness remains.

The origin story Brisson sets between the framing devices of Mahoney’s rampage is, in some ways, a prototypical story of a relatively normal person in Gotham City growing up during the rise of Batman and his increasingly colorful rogues gallery, along with the downfall of the previous organized crime and corrupt police officers. Commissioner Loeb and crime boss Carmine Falcone have a present absence to them, while characters such as the Mad Hatter and James Gordon take on supporting roles that each prove challenges to make Sean Mahoney’s life seem difficult, none of them taking enough time to give the impression that they are anything more than side conflicts in the primary character’s life. However, despite the phrasing and intentionally biased figures in Mahoney’s life, the air of corruption and the ways in which “old guard” Gotham police either directly profit from them or tacitly allow them to happen colors the piece regardless.

Sean Mahoney’s trip down memory lane as he unravels mentally examined how such a person came to be, from his violent tendencies to his heritage. Although he may make what can resemble good points about Batman’s villains and Arkham Asylum itself, other calmer figures make absolutely clear that murder and assault of these people is still illegal, and likely more trouble than it would otherwise be worth, be it on logistical or moral grounds. Although it nominally takes his side in perspective, the reality is that Brisson uses that angle to emphasize how, although the Mahoney family’s connection to the way things once were in Gotham may explain why Peacekeeper-01 has become the way he is, nothing in his life will excuse him. The result is a combination of both sympathy for an abusive home and condemnation of brutality. Brisson does give room for the reader to empathize with Sean Mahoney’s feelings of impotent rage, but never to imply that said feelings should be let free through the channels that Peacekeeper-01 utilizes, be they before or after he takes up the mantle.

Joshua Hixson is famous for his artwork on “Shanghai Red” and “The Plot” for Image Comics and Vault Comics respectively, recently having come to DC Comics for “The Joker Presents: A Puzzlebox.” His gritty, rough art style fits very well with the crazed, yet relatively down-to-earth nature of Peacekeeper-01’s internal struggle and his family’s problems, despite the far less directly relatable nature of his eventual enhancements and actions. “Batman Secret Files: Peacekeeper-01” #1 is in many ways a story about a man’s relationship with his paternal legacy, and the use of focus on particular family members or those speaking about them over a wider, more animated view of Gotham for entertainment helps Hixson to establish a very sympathetic, though perhaps not empathetic, view of the protagonist. Much like in “The Plot,” Hixson is able to utilize the framing of scenes, coupled with subtle hints of emotions such as rage, to set a foreboding or tragic atmosphere, regardless of whether the setting is in a hospital, a bar, a police station, or out in broad daylight. Facial expressions are, though not detailed to an extreme, still more than enough to give the impression of underlying emotion even long before Peacekeeper-01’s descent into fear-induced madness. Hixson can create glares worthy of Stanley Kubrick, or terrifying monsters, or even just a sense of disappointment or disapproval even without the dialogue, to the point that it is entirely possible that the basics of the emotions at work in “Batman Secret Files: Peacekeeper-01” #1 could be understood even without words on the pages.

Roman Stevens gives a very good palette for the colors of “Batman Secret Files: Peacekeeper-01” #1. The overall feeling is one of despair and rage, dark colors in the present day contrasting well against more varied, brighter ones as if to indicate times once were better (despite blatant evidence to the contrary). The coloring itself is provided in deep shadows, foreboding from the past to the present. Cool colors like green seem to indicate calm, but in fact only serve to further emphasize the unseen violence that is explained after the fact. This use of color to give a false impression seems to draw further focus toward the unreliable senses of Sean Mahoney himself, with Stevens seemingly integrating readers’ perceptions with Mahoney’s own, thereby enabling the reader to be both sympathetic toward his attitude and shocked out of any agreement by his off-panel actions even if we were to exclude his present-day violent activities under his drugged state.

Final Verdict: 7.5– An interesting look at the past and present of a relatively recent Batman rogue, well-drawn and colored alongside a good script.