Moving past it’s debut issue, “Batman/Superman” #2 is a much stronger offering, find a stronger balance between character interaction, plot evolution, and outright action. 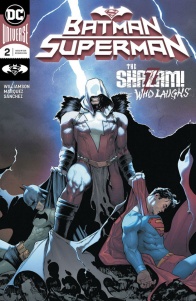 The Batman Who Laughs’ plot is bigger than either the Caped Crusader or the Man of Steel realized. Following a showdown with the devious killer’s first sentinel, a jacked-up, Dark Multiverse-infected Shazam!, the pair has to figure out who else has been targeted for similar transformations. Their first two guesses: someone very close to Batman and the one hero that would make failure nearly impossible-Superman himself!

“Batman/Superman” as a series, or those series of the past with a similar premise, have a lot to juggle. Fans will come in with a certain set of expectations for the so-called world’s finest. From the way Batman and Superman interact with one another, to how big the scale and scope have to be, to the visual style and aesthetics of the book. All of those preconceived notions come with a heavy toll, and not all creative teams can manage it. Happy to assess, then, that Williamson, Marquez, and team have produced a much more cohesive second issue, in great part due to the improved dialogue choices and continuing excellent art. Let’s start with that.

Marquez has been on a career crescendo as of late, producing some of the most dynamic and clear pages DC has to offer recently. “Batman/Superman” is once again fertile ground for the artist to showcase his skills for the larger-than-life moments, as well as the more subdued instances. The battle against Shazam, Batman, and Superman are well choreographed, and some pages that focus on one particular large, explosive entrance is very well composed. From framing to final details, it is clear that Marquez is pouring his all on this project.

Facial expression and conversational moments are just as strong. The artist is able to visually deliver how respectful of one another Bruce and Clark are, and how different their viewpoints are. There are multiple times on “Batman/Superman” #2 where readers will witness each hero on their own thoughts, and on face-to-face encounters. On all of those situations Marquez is consistent with his stylistic choices, so that when a clash does occur, it is more impactful.

For a high-octane book, Sanchez is also key on colors. The action-oriented scenes feel like they are jumping off the page, with a well-saturated palette, especially towards the reds and blues, further reinforcing the emblems on the heroes at the same time.

Credit also goes to letterer John J. Hill. For anyone who has read any story with the Batman Who Laughs character (or his cronies), the choice of word balloon backgrounds, font type, and color ca be something of a chore, and hard to read. Here, Hill takes a more cautious road: the Shazam Who Laughs has a distinct font, but with a still white background. And while a black balloon does get utilised at the end of the issue, it seems the red font color is brighter than in past issues, making it easier to follow.

Back to Williamson’s script, the writer nails a critical element for a book like this: the respect each hero has for the integrity of his friend, and the disdain for their methods. It is a very hard act to pull off; after all, how to appreciate someone, when you disagree fundamentally with their world view and approach? On “Batman/Superman” #2 that apparent dichotomy is not seen as a weakness, but actually as something explored by the story. There are heroes that know full well that the solutions to the problems they face can often be solved only by the combination of their styles.

With that cornerstone firmly set, Williamson set out to use it in a series of situations. The battle against Shazam is a good example of that, with Clark somehow holding his punches and trying to bring Billy back to his mind, with Batman acting like a sledge hammer of practicality. The fallout of that fight is also strongly displayed when Bruce and Clark talk it out while recovering, at the same time they are plotting their next move against the Batman Who Laughs.

On this side of the equation, the issue is at it’s weakest, but it is hard to pin it down to this story alone. Despite being a compelling antagonist, the Batman Who Laughs has been played too much by DC recently, so “Batman/Superman” #2 can feel a bit of a “more of the same” for readers of other related series. Hopefully this will evolve into a more layered approach as the series progresses and more of the Secret Six are introduced. There is potential within… it just needs to rise above the editorial excess this character has been going through.

All in all, “Batman/Superman” #2 gets far more right than it does wrong, and those high notes are the ones that matter the most. With an evolving plot that can surely go places, this remains on the watch-list.

Final Verdict: 7.7 – Stronger than it’s first issue, by lacing character interaction front and centre, “Batman/Superman” #2 is well worth your attention.