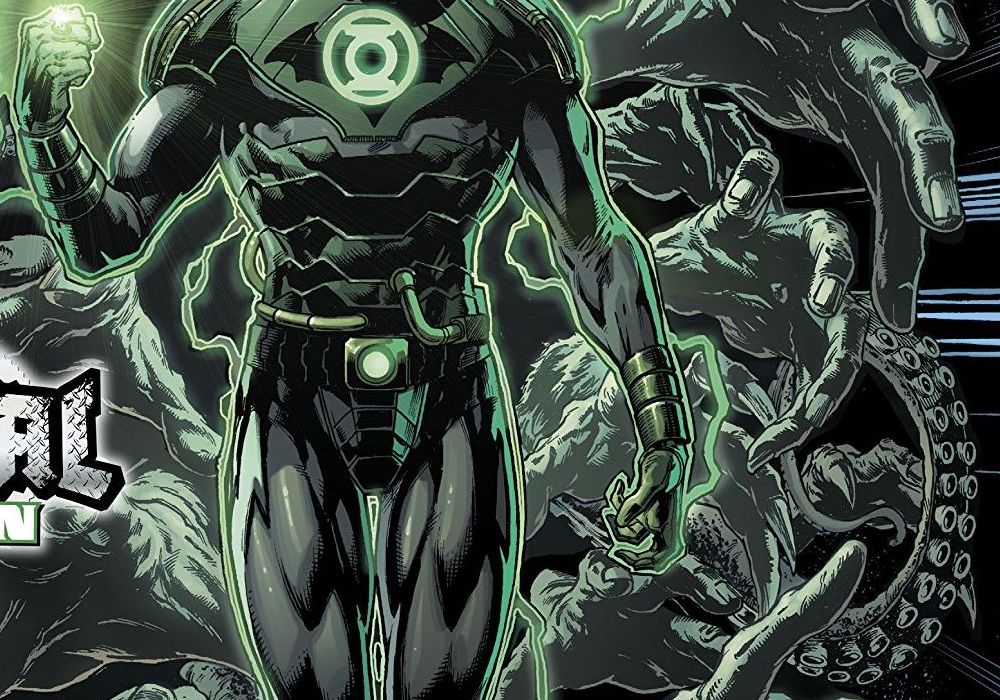 Through blackest day, through brightest night, this issue shouldn’t escape your sight. 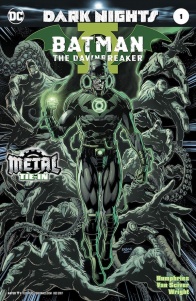 As the events of DARK NIGHTS: METAL rock the DC Universe, the creatures of the Dark Multiverse stand ready to invade our world! How can even the World’s Greatest Heroes stop a horde of deadly beings that appear to be powerful, nightmare versions of familiar figures? Find out in these special tie-in issues!

In 1994, an Elseworld story was released in Earth-32, focusing on Bruce Wayne getting a Green Lantern ring instead of Hal Jordan, followed by the aftermath of such an event, including an entire Justice League of Green Lanterns.

‘Fear of the Dark,’ the take on the origins of the Dawnbreaker, Bruce Wayne of Earth -32 of the Dark Multiverse, is not that story.

In fact, Sam Humphries’ take on the Dawnbreaker makes for one of the darkest stories of the Dark Multiverse, both literally and figuratively. Taking the perspective of a depressed, enraged Bruce Wayne who received a Green Lantern ring not long after his parents’ murder, Humphries uses a similar methodology to other authors of Dark Knight origins. Rather than use a simple “Batman, but evil” approach, Humphries instead analyzes the teenaged mindset of Bruce himself, looking in on how he could have grown up differently without his extensive moral and physical training if given a weapon immediately after becoming an orphan. Although perhaps he seems to develop a bit too quickly to become as powerful as he is, and his powers may seem too strong for a Green Lantern, especially a rookie, the overall effect is one of terrifying nihilism.

Sam Humphries deals with a different kind of villain than the previous two origin one-shots, “Red Death” and “Murder Machine.” The Dawnbreaker is presented as a fundamentally depressed and emotionally broken person, someone who is still essentially the child from Crime Alley, lashing out at the world and wanting it to conform entirely to his own sense of mind, nonetheless unable to take control of his situation for himself. Humphries portrays him as both powerful and helpless, having the strongest weapon in the known universe on his finger, but still unable to do the one thing he wants more than anything: resurrect his parents. As a result, while his methods of murder are horrific, something straight out of an H.P. Lovecraft textbook, Humphries’ portrayal of the Dawnbreaker’s fundamental emotional emptiness makes him incredibly pitiable, though his unwillingness to seek help from outside sources beyond his weapon keep him from being too sympathetic. The need for companionship, especially his parents, makes Bruce Wayne of Earth -32 more manipulable than some of the other Dark Knights. Furthermore, Humphries’ use of sparing dialogue combined with extensive internal monologue creates the image of a man caught in his own head, unable to accept things in the real world beyond what they mean in relation to himself.

Something interesting is the fact that Bruce Wayne of Earth -32 seems to survive the definite destruction of his temporary universe. Given the level of power behind some of these concepts, how common is it for the essential concept (Batman with a Green Lantern ring, Batman with the Speed Force, et cetera) to escape and survive the death of their surroundings? The possibilities seem endless.

The use of the sheer hopelessness makes the use of a savior in the closing pages that much more triumphant, showing that a story can be made far greater through absence and sparing application of a concept. Similarly, the introduction of true heroes to the narrative comes with the inclusion of more dialogue, showing people who are able to put the needs of the world above their own neuroses and depression at least enough to help rather than harm.

A side note: the Dawnbreaker’s oath seems to have an issue with its rhyme. However, it might work if one considers “into” as two words, or at least pronounces the syllables distinctly separately.

Key to the presentation of the Dawnbreaker is the depiction of his powers and world, something that Ethan van Sciver accomplishes with great success. The monstrous entities shown are truly horrifying, despite being only seen a few times. The penciling of this broken nihilist shows an intentionally lacking emotional range, only seeming able to really show rage or calm, in contrast to the sheer horror of those around him. Furthermore, the use of black, of an absence of imagery at all, is intentionally distressing, creating well-crafted tension.

This use of shadow is especially important to this issue, as the focus on darkness is key to this user of corrupted, sick, infectious light coated in darkness. In a sense, the art makes the Dawnbreaker seem almost as dangerous as the Blackest Night, or at least have the potential to be as dangerous to the world at large, if not moreso, with a light that serves to bring horror, not hope, to bring darkness and chaos, not brightness and order.

Given this is a Green Lantern comic, color is essential, and Jason Wright definitely follows through. The bright, vibrant green of a normal Green Lantern’s energy is contrasted against the diseased, sickening hunter green of the Dawnbreaker’s power, the discrepancy allowing the creative team to show just how fundamentally wrong he is.

In all, this issue is very intriguing, making for a take that will bring a lot of interesting ideas to the fore for the future, especially in his interactions with Hal Jordan going forward.