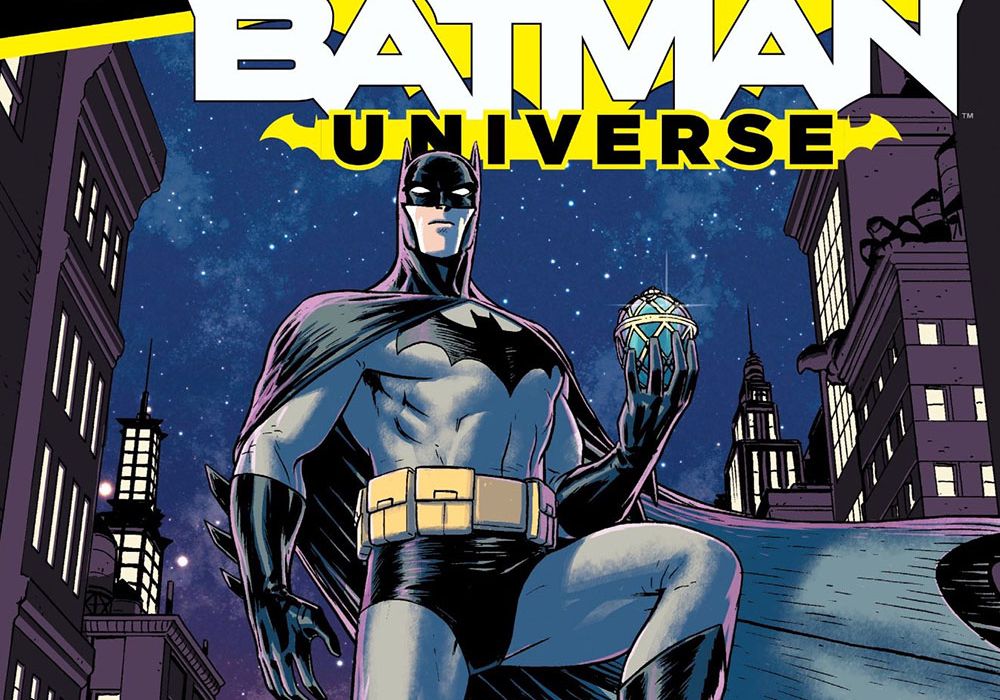 With “Batman Universe” #1, DC presents the first two 12-page stories that were serialized beginning in the third issue of the Walmart exclusive “100-Page GIANT! Batman” books that launched in 2018. It’s a godsend for those of us that either couldn’t or wouldn’t get themselves to the big box superstore. I was in a third camp of people that tried in vain to locate the $5 books designed to reach the elusive target of new comic book readers. I’ve still never seen one in the wild so it’s nice to finally lay eyes on this once-exclusive story. It’s even better that the book is a triumph on multiple levels thanks to a super-powered creative team firing on all cylinders. 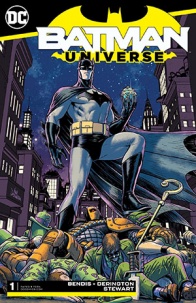 Following the theft of a priceless Fabergé egg, the Riddler leads the Dark Knight on a wild hunt after its true owner: Jinny Hex, descendant of Jonah Hex! Guest-starring Deathstroke, Green Arrow and dozens of Riddler look-alikes in stories by Brian Michael Bendis with art by Nick Derington, originally published in BATMAN GIANT #3 and #4!

First things first, the tone of “Batman Universe” #1 is a refreshing approach in the wake of the last three decades of somber storytelling for the character. This is not to say that the book is All Ages friendly, but it more closely mimics the Batman books of my childhood (yes, I’m old). If you’re worried that this also means that the book veers toward ’60s Batman television series camp, fear not. It feels more like a spiritual successor to the sublime Batman: The Animated Series and the lines of comic books that television series inspired but with a dash more spatter and grit.

With issue one, Brian Michael Bendis and Nick Derington deliver a 24-page story with more surprises and rewarding cameos than any two $3.99 issues put together, and while I love Tom King and his artist partners’ current psychologically-probing run on the flagship DC title, “Batman Universe” serves as a welcome tonic. Right from the start, Batman is launched into a frantic manhunt for The Riddler (all the while dinner guests at Wayne Manor are kept waiting by their mercurial billionaire host). Batman’s communication with Alfred via comms yields a surprising amount of levity to the proceedings, including a recurring bit where characters ask Batman for clarification on the person he’s addressing. Subtler beats include Batman’s daytime visit to a rural American town to track down the original owner of a stolen Fabergé(!) egg. Bendis’s voice for The Caped Crusader, a nom de guerre that seems apt in a story like this, is decidedly less abrupt and harsh here, and it suits the proceedings. For once, Batman seems like a guy that might actually be okay to hang out with. His deadpan one-liner “I love small towns,” actually elicited a chuckle from this reviewer. Even throwaway comic relief lines like that one carry a subliminal weight in Bendis’s script. Of course Batman would welcome the relative tranquility of a small town after countless nights getting bloody in the concrete, glass, and steel caverns of Gotham City. The Riddler flash mob and their comical interrogation scenes also bely an increased weight to the proceedings, especially as it pertains to the real Riddler and his mental state. The book is building to a confrontation with a big bad so there are dark doings ahead, but we’re in for some fun (and likely a bagful of additional character reveals) along the way.

Nick Derington continues to delight as an artist. While he’s probably best known for his covers to the Eisner-winning “Mister Miracle” and the interiors and covers for the DC Young Animal imprint’s “Doom Patrol,” his work here deserves to cement his status as a comic book superstar. Tweaking his impeccable cartooning ever so slightly from his recent “Doom Patrol” work to include a bit more texture to his stylized but still classic-looking character renditions, Derington’s Batman is more lithe and agile than his more recent hulking incarnations. Think Steve Rude, Darwyn Cooke, and Rafael Grampa tossed in a blender for a refreshingly healthy Batman smoothie. The always excellent Dave Stewart elevates Derington’s draftsmanship to another level of superlative. His mastery of the color wheel is flawless, popping complimentary highlights in just the right spots, and Josh Reed’s lettering is clean and clear as a bell, leaving no narrative morsel ambiguous. The behind-the-scenes editorial team of Brittany Holzherr and Jamie S. Rich might be to thank for the decision to brighten up Batman’s usual color pallet (it’s geared towards new and likely younger readers after all and even the cover seems noticeably brightened, especially in the highlights, from the initial solicitation image), but even if they aren’t, their contributions to this escapist thrill of a story should be commended. It’s often a thankless job, but when a book is this good, everyone on the team deserves their due.

“Batman Universe” #1 is a clinic in streamlined, unfussy storytelling. There is a superb efficiency in how the book introduces the storyline’s twists and players (one in particular has her first comic book appearance here before her starring role in Bendis’s “Young Justice” series), and the way the story doesn’t stop for blatant splash page exposition and exhibitionism is to be commended. There are no wasted panels. In addition, there was clearly an effort to present the story in the least confusing way possible, forgoing complicated page layouts for easy-to-follow panel progressions (again, more welcoming to new readers). Perhaps there’s something to be said here in the book’s elegantly simple approach to storytelling. In a landscape where creators are constantly trying to one-up themselves as well as others with the way a comic story can be presented, this makes a strong case for a more straightforward approach. As stated in the onset, there’s something charming and evocative of a bygone era of superhero sequentials at work here too, and on a more metatextual level, there may be something to be said for creators trying to lure new readers more often.

Final Verdict: 9.5 – “Batman Universe” #1 may not be new for some who got their hands on those “100-Page GIANTS!,” but for those that didn’t it should feel like a breath of fresh air wafting through the city streets of Gotham.