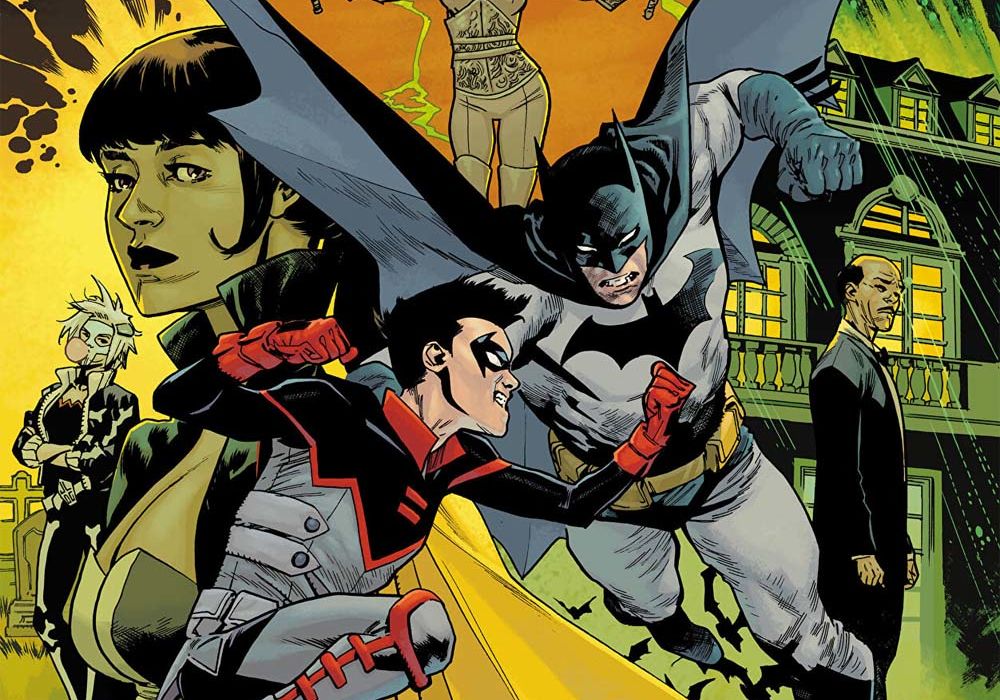 Two heroes of Gotham City face off against each other with a magic-based backdrop in the beginning of “Batman vs. Robin” #1! 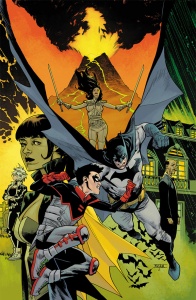 Spinning out of the events of both Batman/Superman: World’s Finest and Shadow War, father and son will do battle in one of the single most earth-shattering tales ever told!

Deep in the heart of Lazarus Island, the demonic legacy of the al Ghul family line has at last been freed, and the Devil Nezha is out for blood. To reclaim his total domination over planet Earth, Nezha has supercharged magic—anyone who dares use it is overcome by a demonic evil that supercharges their abilities to dangerous, unpredictable, and in some cases deadly levels! With Damian in Nezha’s clutches and Bruce haunted by the return of an old friend, the Dark Knight and the Boy Wonder are pitted against one another in the battle of the century!

Putting aside his battles with supervillains, Batman has dealt with conflict within his teams, and within his own family, both in the form of verbal arguments and more physical battles. He has dealt with people trying to kill him from all measures of closeness, not to mention mind games and other threats from more removed foes. Despite having the same name, “Batman vs. Robin” #1 is not to be confused with the animated adaptation of the ‘Court of Owls’ arc released in 2015. Instead, Mark Waid crafts an entirely different kind of story, one dealing not with Gotham itself, but with forces much stranger and perhaps more powerful that bring the eponymous Bruce and Damian Wayne into a new “war” against one another.

An interesting element at play is the use of mystical forces in this battle. Batman sometimes does deal with magical villains, but often as a team. Technically speaking, elements of the al-Ghul family may qualify, and Waid makes good use of that part of Damian Wayne’s legacy through his mother’s side of the family. However, while Batman is not typically associated with sorcerers or other magic users of a villainous nature, he has had connections if a more positive nature, and rather than ignore those pieces entirely, Waid makes use of them in terrifying, albeit brief, detail to explain why this has to be, at its core, a Batman family tale. Further, it seems that there is room to use other, relatively low-key magic users that are not often associated with Batman himself.

On the whole, the main problem newcomers may have is one of context. Waid does not take much time to explain who anyone is, nor to give many details about the current status of the relevant parts of the DC universe. While there is some explanation for people toward the beginning, by the end, newly emerging characters just seem to appear, with readers expected to know who they are from reading, if not “Batman/Superman: World’s Finest,” then at least the ongoing “Robin” series and the completed, connected ‘Shadow War’ arc. With some characters likely entirely unknown to fans who are not entirely up to date on Batman-affiliated comics, those characters are, though seemingly the most important, also the least explained. Without that context, the audience may be left at a loss for what is actually happening, let alone why said events are even occurring in the first place or why a given reader should really care.

Mahmoud Asrar does a fantastic job on setting up the emotions at play throughout “Batman vs. Robin” #1 with his stellar illustrations. On the one hand, we have the shock, concern, and at times even bemusement from a character (unnamed for sake of the story) that strike a chord with readers for the purely human nature of these emotions. Then we have the arrogance or inexperience of various antagonists, not to mention malice, all of which come to a head some ways into the plot of this debut issue. A horrified expression is all the more potent when put up against Bruce Wayne’s enforced outward calm, but it is the sharp changes in expression of Robin, from anger or confidence to shock and a bit of kindness that really cut to the heart of who is most important to various members of the Batman family. Furthermore, the facial expression on an executed user of magic is absolutely haunting (no pun intended), further concentrating focus on how whatever is happening is exceptionally disturbing to the magical community itself.

There is also how Asrar utilizes light sources and shadow. The way that a character can be lit by a flash of lightning or other shocking, yet brief source of illumination helps with the foreboding atmosphere, be it outside or in enclosed spaces. It is indeed a dark and stormy night, but the way that Asrar shows this trait really emphasizes it regardless of the location.

Jordie Bellaire has been well known for her use of color in a variety of series, and by no means does she disappoint in “Batman vs. Robin” #1. Despite being a story that has a very limited number of locations, the raw loneliness, confusion, and terror are on full display through careful uses of red, black, blue, and other hues, shades, and tones throughout the plot. The way that one magic user uses an extremely bright force contrasts with the literal darkness of most of the story, and despite intense moments of little more than shadows, the colors presented clearly designate what exactly is going on. With exception of the final pages, most of Bellaire’s colors are both strictly literal interpretations of what is actually happening and emotional, figurative methods of capturing underlying emotions, a facet that the character of Batman often has trouble adequately expressing, but are clear to the viewer. The aforementioned final pages are more literal in their focus, and in the process do not seem to give much in the way of defined emotional reactions for viewers who are not versed in recent “Robin” stories, but perhaps that is the point due to how there seems to be something of a disconnect from the direct conflict of the overall plot for “Batman vs. Robin” #1.

Final Verdict: 7.0– Despite some issues with understanding the underlying plot elements, this introduction is an interesting enough start to the battle between father and son.