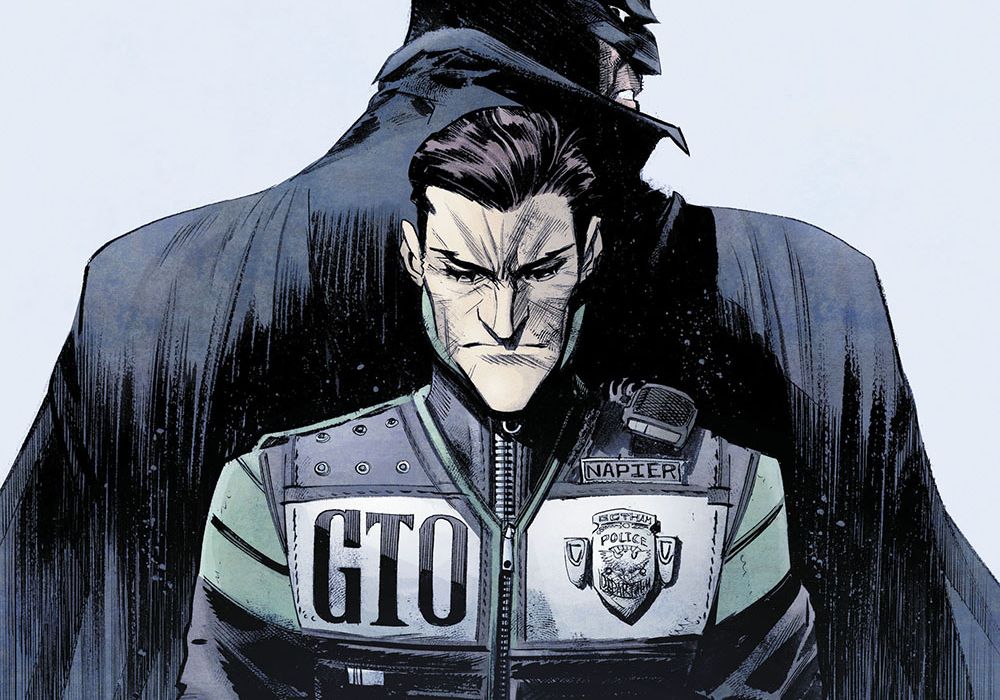 With this issue, Sean Murphy puts a period on his “Batman: White Knight” miniseries, but you have to wonder if it’s more of a comma. SPOILERS 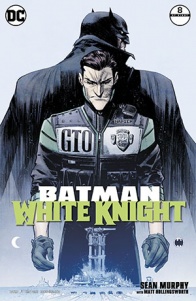 In the extra-sized finale of Sean Murphy’s top-selling miniseries, Jack Napier’s suspicious seduction of Gotham City comes to its twisted conclusion! With the city on the verge of becoming an icy tomb for the GTO, Batgirl makes a crucial assist and Gordon is forced to reevaluate his judgment of Batman to secure the greater good. As the true Joker’s return becomes imminent, Harley seeks vengeance and reckons with the bleak future that looms for her loved ones.

I have greatly enjoyed “White Knight.” I have also admired Sean Murphy’s attempt at social commentary and his willingness to use Batman’s relentless war on crime to say something about life in the 21st Century. While Murphy’s scripts have not always been subtle, almost veering into pedantic, they have fearlessly posited questions about good and evil. More importantly, Murphy has taken these concepts and showed how malleable they can be, like a kind of moral relativism. It’s not necessarily new ground, but with “White Knight” Murphy has really greased that slippery slope and cranked the “What If?” knob up to 11. By the time this final issue begins, it’s time to start blowing some stuff up.

Pulling from the cinematic and animated iterations of Batman lore, Murphy throws the kitchen sink at readers in this issue. The history-laden winks at readers come fast and furious as the most iconic Batmobiles from the Batcave’s garage hurdle towards Neo Joker’s posse and that big ice gun. Murphy continues to play fast and loose with the Joker, calling for a hefty suspension of disbelief as his Jack Napier again transforms into the heterochromia clown prince of crime under duress like a Saturday morning cartoon version of the Green Goblin. Don’t remember that Spider-Man and His Amazing Friends chestnut? Well, just imagine Bill Bixby’s Dr. David Banner saying, “You wouldn’t like me when I’m . . . crazy.” It’s best not to question the physiological implications and just go with it because once Clayface gets himself back together, all hell breaks loose. Murphy’s action pacing in this issue is superb, juggling vehicles and characters bounding across panels with reckless abandon. It’s the type of gravity-defying action set piece that only comics can pull off, and Murphy’s draftsmanship is more than up for the task. Matt Hollingworth’s colors take center stage in this issue as well, making the proceedings feel less grim than the previous installments. Each panel in the first half of the book is action-packed, but it never feels overwhelming.

The narrative ground that this issue covers doesn’t feel overwhelming either. If anything, it could have lingered more on some of the meatier societal issues that it tried to tackle over the course of the series, but this issue is all about resolution and redemption, and Murphy has likely said enough for now. If this final issue has a storytelling fault it’s that the idea of disabling a super villain doomsday device is as old as the hills, but that can be forgiven when a creator is clearly having this much fun.

Fans of the miniseries will find that the issue provides multiple payoffs. Our heroes get to stop arguing and be heroic, and it’s a particularly welcome thing for Batman, who almost gets lost in the organized chaos, that Murphy allows him a moment to remind readers that this is still the Batman that we all love when he saves Napier. We also get the the mano a mano between the two Harleys that’s probably over too quickly but still fulfills the necessary story beat before diving into the issue’s briskly-paced but lengthy coda that includes some satisfying emotional moments. The most admirable part of the issue is that Murphy is not content to follow the typical comic book convention of resetting the board the way he found it. Things have changed, and while there are lessons that the world’s greatest detective should probably have learned before now, the issue ends with some unanswered questions and a status quo-changing reveal that leaves the door open for a return to Murphy’s Batman universe.

Murphy has made no bones about his willingness to play fast and loose with Batman’s continuity and the carte blanche afforded to him by DC editors makes “White Knight” a welcoming story for Batman neophytes (in the same vein as the “Earth One” graphic novels) and a rewarding experience for open-minded Batman aficionados, particularly those who grew up in Batman’s cinematic and animated series halcyon days. It’s a refreshing take that embraces a time in comics when things were not so bogged down with continuity. When coupled with the overall craftsmanship of the series, the high wire act that is this final issue embraces the best of comic book storytelling, the form for new ideas coupled with a dash of nostalgia. It’s a testament to what an auteur can do when unshackled by editorial mandates. “Batman: White Knight” may not be to everyone’s taste but worthwhile art rarely is.

Final Verdict: 8.5 – Sean Murphy’s unapologetically gonzo and gritty miniseries comes to a close with a lot of loose ends, but it’s still a satisfying conclusion to a series that was unafraid to take some narrative and stylistic risks with venerable intellectual property.