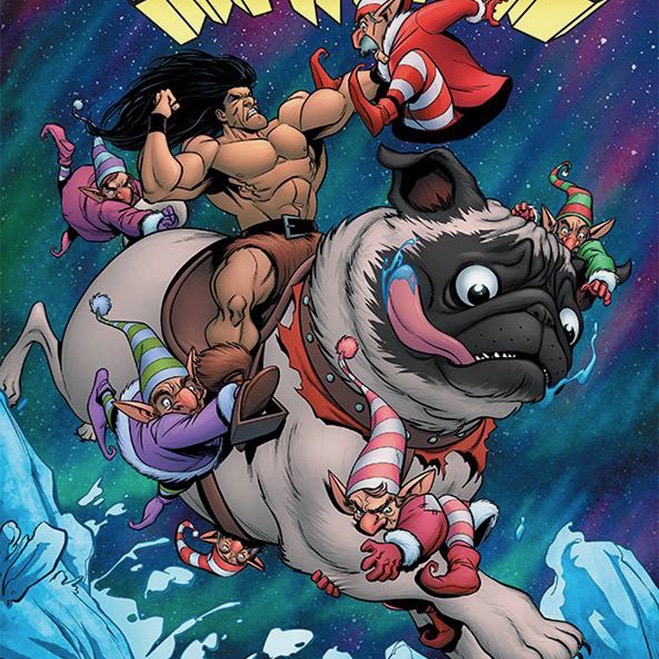 No severed hands this time, but “Battlepug” #2 is as witty and packed with hijinks as the debut issue. It just needs to pick up the pace. (Warning: may contain minor spoilers.) 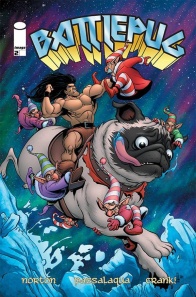 “WAR ON CHRISTMAS,” Part Two
The last Kinmundian and his faithful Battlepug have returned to his homeland to face his past, but are they prepared for what they will find? Meanwhile, his friends are at the mercy of the most ruthless band of criminals in the forest—The Nobody’s Ponies!

The debut issue of “Battlepug” was packed with plenty of action, snarky dialogue, contemporary references, and character introductions. With a core cast of 5 humans and 3 separate dogs, that last task alone was no simple feat. The book could have staggered under the weight of it all, easily collapsing into a shapeless mass of exposition, prologue and world building. Instead, author/illustrator Mike Norton, colorist Allen Passalaqua, and letterer Crank! did an outstanding job of establishing the book’s tone and setting the plot in motion, immersing us seamlessly into the rich and very funny Last Kinmundian mythos.

Without question, the book’s foundation is the classic Conan archetype, but from that point forward, things diverge pretty quickly. If the absolutely massive, elephant-sized battle pug on the front cover of either of the first two issues doesn’t quite land the message, pick any page and random and it’s pretty clear: this is not your father’s furry-booted barbarian saga – even though the Last Kinmundian proudly and unironically wears very furry boots and a super shaggy loincloth.

Heroic fantasy tropes aside, “Battlepug” #2 also riffs on plenty of other epic fantasy symbols and imagery to create a truly unique, rather high concept, Sword and Sorcery universe – albeit with loads of whimsy and unabashed quirkiness. There’s even a dose of druidic, elemental philosophy in the form of a Force analog referred to as The Balance, “a mystical energy that combines the world’s three states: the Root, the Rock, and the Claw,” though where exactly that’s going is far from clear at this point.

In many ways, “Battlepug” #2 is a quintessential second installment. The pace slows down considerably, there’s no actual bloodshed – much less severed hands – and the script gets wordier and way more dialogue heavy as it churns through some backstory and fleshes out plenty of details. Thankfully, there’s still plenty of humor, at least a few clever surprises, and some great splash pages. Not to mention the introduction of yet another wakadoodle character.

Here, Norton’s line work shines, showcasing a knack for highly original, off-the-wall characters who leap right off the page. Scribbly. As the former pirate Callistus welcomes our party of travelers to the once downtrodden town of Rensselaer – a former “dank hub of scoundrels and villains” – he’s so enthusiastic, a mere one panel can’t quite contain him. Scrabbly. One hand overlaps an inset panel and his elbow runs off the page, epitomizing his energy and the book’s unrestrained attitude. Scribbly. With bulging, asymmetrical eyes, a big gray mustache and beard, and scrawny arms wrapped in bandages, his bold, cartoonish look reflects his screwball persona. Scrabbly. Not only has Callistus revitalized the whole village, he’s also transformed it into the quaint, Ren Fest knockoff Hamball Capital of the entire realm. Scribbly. You’ll also quickly notice he punctuates most every statement with either “scribbly” or “scrabbly,” an eccentric verbal tick and off-kilter creative choice indicative of the entire aesthetic. It’s utterly weird and wacky, mostly wonderful, mildly annoying, and somehow perfectly suited to the narrative.

As are Allen Passalaqua’s bright, saturated colors. From the rich, varied blues of the Northland to the deep green of the forest to the red and white candy canes, the palette is pretty constrained, yet incredibly lush and vibrant – full of both figurative and literal eye candy. Passalaqua’s crowning achievement, though, is the My-Little-Pony-meets-Martin-Scorsese scene. Never has a team of pastel color horses looked so fierce and badass. Despite the obvious visual gag, Passalaqua keeps things in check and doesn’t overdo it, wisely choosing, instead, to play it all pretty straight.

Ultimately, on the one hand, there’s an awful lot going on here. Weirdly, on the other hand, it feels like not much happens. The book’s repetitive back-and-forth story structure, which intercuts between scenes of the Last Kinmundian venturing off into the Northland and the travel party closer to home, led by their new friend Callistus, tends to feel redundant and too predictable. It’s meant to keep the pace moving and create a visual rhythm, but in the end it feels like two big, long scenes arbitrarily woven toegther. Crank!’s artful and innovative, energetic letters do a lot to break things up, but things still tend to bog down in at least a couple of stretches.

To be sure, the story ends on a wonderful cliffhanger that’s sure to pique your interest and beautifully sets the stage for an unpredictable third installment, but along the way it feels like there’s a little too much filler. If the script tightens up going forward – as it feels ready to do – this book will be even more fun. And a great title to add to your pull list.

Final Verdict: 7.8 The energy flags a bit in “Battlepug” #2, but there’s still plenty of humor and some great character designs.