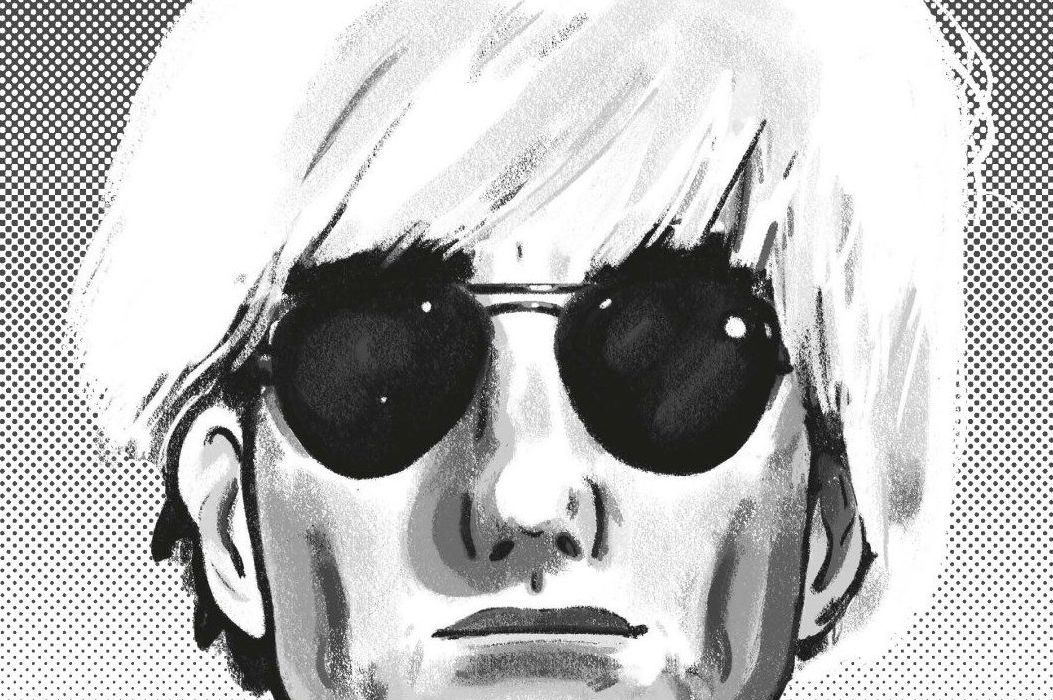 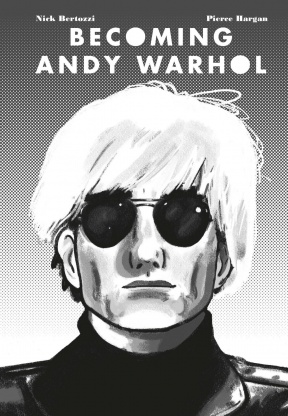 Celebrated during his lifetime as much for his personality as for his paintings, Andy Warhol (1928–87) is the most famous and influential of the Pop artists, who developed the notion of 15 minutes of fame, and the idea that an artist could be as illustrious as the work he creates. This graphic novel biography offers insight into the turning point of Warhol’s career and the creation of the Thirteen Most Wanted Men mural for the 1964 World’s Fair, when Warhol clashed with urban planner Robert Moses, architect Philip Johnson, and Governor Nelson Rockefeller. In Becoming Andy Warhol, New York Times bestselling writer Nick Bertozzi and artist Pierce Hargan showcase the moment when, by stubborn force of personality and sheer burgeoning talent, Warhol went up against the creative establishment and emerged to become one of the most significant artists of the 20th century.

If anyone has outlasted the “15 minutes of fame” concept, it is the man who gave birth to that concept: Andy Warhol. A generation after his death, the poster child for the Pop Art movement still remains a relevant, fascinating figure. His friendship with the young Jean-Michel Basquiat can be seen throughout all the latter’s work (and itself was a significant part of the 1996 biopic Basquiat). That famous statement on fame (in full: “In the future, everyone will be world-famous for 15 minutes”) seems to have predicted the rise of the social media and reality TV star era a half century before such concepts became part of the cultural vernacular. And at New York’s Whitney Museum of American Art, a new exhibit on the artist – – the first in the United States since 1989 – – presents new scholarship and new complexities to the man born Andrew Warhola in Pittsburgh in 1928. He is ever present, ever recognizable – – he is the longest 15 minutes of fame any one human has had.

Bertozzi and Hargan’s graphic novel biography, originally published in 2016 and reissued this year (no doubt to coincide with what would have been Warhol’s 90th birthday and the aforementioned Whitney retrospective) is a biography in the loosest of terms.  Indeed, it does focus on a period of Warhol’s life; specifically the creation of the controversial “Thirteen Most Wanted Men” piece for the 1964 World’s Fair, and Warhol’s career up to and slightly past that point. It is a story of an artist finding his own voice in an increasingly commercialized world, his struggles at creating thoughtful, boundary-breaking art while paying the rent and putting food on the table.

The touchpoints of early Warhol works all have their moments in these pages: the soup cans, the Brillo boxes, the Factory, Edie Sedgwick, Jackie and Marilyn. Yet, and by Bertozzi’s own admission, this is neither scholarly work nor accurate picture of the historical record. He compresses and embellishes details to “create a story that would serve as an engaging and thoughtful guide to the experiences that became his art.” With that lens in mind, this is less a story of a man and more a story of the world around him. The creation of some those famous works are presented not in a vacuum, but in relation to each other. Eleanor Ward displayed “Silver Car Crash (Double Disaster)” at her Stable Gallery in 1963, but questioned her artist as to “what happened to that Elvis idea I gave you.” Art is not art in a vacuum, and this kind of context, while not 100 percent accurate, is a welcome addition to the scholarly record.  There’s no shortage of biographical scholarly works on Andy Warhol in the marketplace, all of which would prove a fine supplement to Bertozzi’s story to explore the long tail of Warhol’s life and career.

Notably absent from this work, at least overtly, is Andy’s personal life with respect to his homosexuality. The artist himself admitted in many interviews the influence his sexuality had on his work, which leads one to expect it to come into play many times in these 150+ pages. And yet, there’s only a few moments where that is explored in depth; the most significant and longest being a screening of Jack Smith’s Normal Love at the New Bowery Theater in 1964 with a raid ending the screening.

Pierce Hargan’s artistic hand is light. Fine lines are the order of the day in all depictions, from setting to characters. His Warhol shows boyish charm and is nondescript in his looks.  This is Warhol before the sunglasses and unkempt white hair of his legacy, but still with an air of thoughtfulness and the slightest touch of ego and determination. It isn’t until the final chapters that Hargan’s Warhol appears with his iconic sunglasses and bowl haircut. His faces are flat, devoid nearly all contouring and almost indistinguishable from person to person, though basic facial features remain as a means of telling people apart.

Hargan has instead directed his time more towards poses and facial nuances as an expression of character, and here it’s to great success, complimenting the script and taking setting to a second level past that of place. With closed eyes and an upturnt nose, you can hear the condescension in Eleanor Ward’s voice at her protege’s disregard for her suggestions.  In one panel showing Andy’s anger at a less than successful show, Hargan gives us the artist hunched over in the midst of trashing his workspace, feeling both angry and defeated at the turn of events, all while his possessions fly around the room with wild abandon. It’s bold visual movement with an ironic slight hand, which seems more than apt for this particular era of Warhol’s life.

Shading and texture come into play in creative ways.  Large swaths of black – – from a t-shirt to a night scene – – carry a texture of charcoal applied in freeform, broad strokes.  This technique appears more and more in the latter half of the book as Warhol evolves within his fame.  Benday dots, that hallmark of Pop Art texture, also make their appearance in the second half of the book, perhaps showing the increasing influence of contemporaries Roy Lichtenstein, Jasper Johns and Robert Rauschenberg – – men who dabbled in Benday dots like the Old Master dabbled in oils or tempera – – without having to show them on the page.

And for an artist who dabbled in bright colors, there’s only one color used in this entire graphic novel: purple. I’m perplexed with this choice of color. It wasn’t a focal color of Warhol’s work, though a quick Google search does reveal quite a few of his paintings with purple at its base. Perhaps it is for the meaning of the color – – the mix of stability and energy that Warhol craved in his early years, his creative passions, his desires for mystery and power. It’s applied in different places and in different shadings, sometimes to emphasize, other times to distract. The one panel where it works is near the very end, where Warhol is getting dressed in what would become his signature look and he pauses to look in the mirror.  The reflection back, while maintaining some detail, is Warhol in purple. It’s a commentary on the power he craves and his proximity to achieving it.

As we end this story at the Castelli Gallery in 1964, Andy is asked “Are you going to just keep on like this?” He answers simply, “yes.” And when pressed later on “why do you art?” his answer is not steeped in philosophy or academia: “I gotta bring home the bacon.  I got a lotta mouths to feed.” He would later write in The Philosophy of Andy Warhol from A to B and Back Again about his fascination with the business of art and art as a business. Perhaps it is that idea that rockets Andy Warhol to superstardom, more than any painting or film: the ideas of producer as product, people as product, and celebrity. And in that lies the argument that Andy Warhol could be the grandfather of celebrity obsession and reality tv culture.  Take that, Kardashians.