The pinup model that launched a thousand (if not more) fantasies through the 20th century is back at work in front of the camera (after being kidnapped for a strange human sacrifice ritual) doing what she does best – bad B-movies. Bettie’s taken a break from the Rocket Mill but still remains friends with her boss Rick, who picks her up one night for some covert operations – and of course, things get dicey for them right quick. While Bettie and Rick evade trouble this time, it does follow her back to her movie set, proving that her public and secret lives will never remain separate. 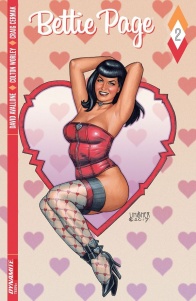 Bettie Page – pinup model, bondage star, actress….government spy? Dynamite’s interpretation of the previously unknown (but highly fictionalized) backstory of the icon is still attempting to find its footing with this second installment.

This fantastical take on Bettie’s life is entertaining in the best B-movie sort of way – think of it like a can of soda, empty in calories and substance but loaded with sweet, innocent, innuendo-laden fun. It’s not going to fill your up for a whole meal but can give you a jolt for a boring afternoon at work. It will be interesting to see how much of Page’s real life plays into this comic – I’m guessing that this story is taking place in the late 1940s/early to mid 1950s – the twilight of her real life career, retirement, and Christian conversion. How do you fit a side gig as a spy into all that? Much of this book reads like a script for a possible Season 3 of Agent Carter, right down to Rick’s more than passing resemblance to Howard Stark. Is Bettie just here for the name recognition to boost sales? As this is the only second issue, this is yet to be seen.

I’m happy to see Bettie drawn from certain angles with a lot of the bass and none of the treble (as the Meghan Trainor song goes) – muscular arms, strong thighs, a thicker waist and abdomen, and of course, her large breasts. The strong body accentuates her feminist character (girl doesn’t take anything lying down, metaphorically speaking!), and as a woman of a certain size, I’m happy to see an attempt at realistic drawing of women in comics. However, like the plot, this is not reflective of the real Bettie Page – while she was quite well-endowed in the chest, she was much smaller in the waist and abdomen. If you’re interpreting real-life characters in comics, please make an attempt at getting as much of your source material as accurate as possible. Worley and Cermak are opting for fantasy over reality in their depiction of our protagonist – which is understandable, as this is a fictionalized account of her life. However, readers who use this as a springboard to learn more about the realBettie Page could be left disappointed. Points for accurate rendition of period wardrobe and accessories; I love seeing Bettie in high waisted pants like one of her possible childhood movie idols, Katharine Hepburn, and the classic cars scream post-war California.

The colors came across as flat and lacking in depth and shadow, and the inking doesn’t seem to make up for this. The style is reminiscent of glorious Technicolor throughout, appropriate for the time frame – you see this well done during a car chase with gunfire in the first half of the book, with machine gun fire in oranges and yellows that jump right off the page and make you feel the heat and hear the gunshots. It’s odd to see such a cool palate in the second half of this book (as well as parts of the first) – it’s still bright, but the greens, blues, and purples throughout seem rather muted, and I’m not sure why – it doesn’t add anything to the story, especially with some of the action taking place in these panels. Pezzillo does one thing right with her coloring – she makes Bettie pop, particularly by placing her wardrobe in colors counter to the overarching palate – red costumes on the movie set, a white sleeveless top while out and about in the twilight of a Hollywood evening.

For a fun story you can read poolside or beachside in these waning days of summer (in the Northern hemisphere, at least), “Bettie Page” fits the bill. It’s a summer romance in comic form that may or may not last into the cooler months, but summer isn’t over just yet.

Final Verdict: 6.0 – Fans of Agent Carter will enjoy the “spies in Hollywood” plotline, but this can become “let’s use the Bettie Page name to drive sales” gimmick fast (with said gimmick not working for many) if better attention is not given to the real Ms. Page herself, both in plot and in art.