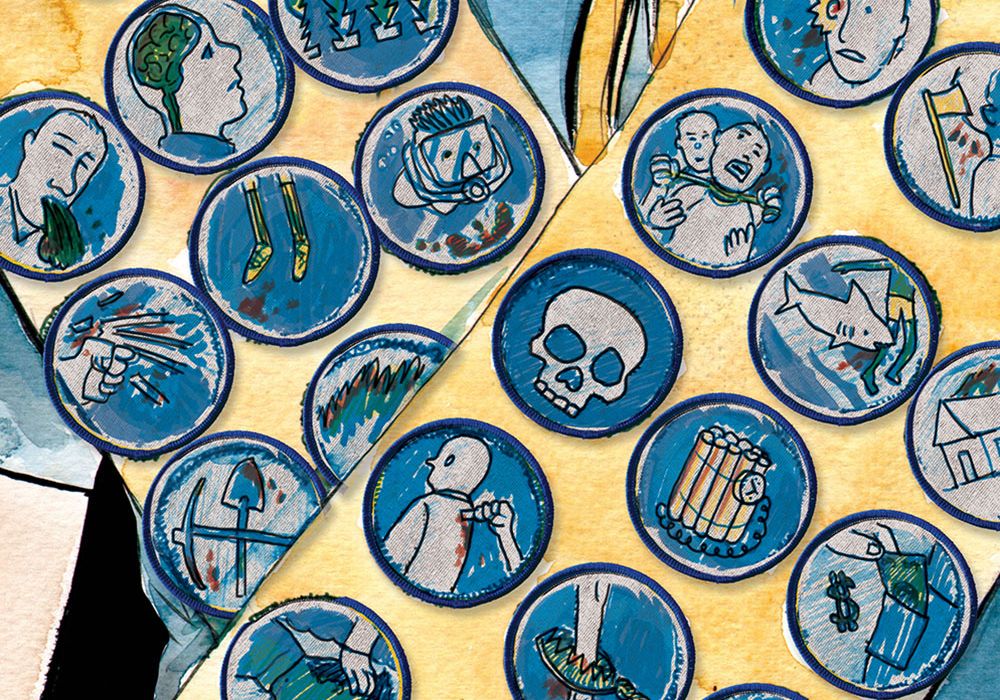 Even by comic book standards, the premise of Matt Kindt and Tyler Jenkins’s “Black Badge” is borderline ridiculous, but if anyone has been able to make readers suspend disbelief, it’s Kindt. His stories demand to be taken seriously. The first three issues of the Boom series have done an excellent job creating plausible scenarios where one could imagine the utility of a team of teen-aged military operatives posing as scouts, and issue four continues the trend, planting seeds for Kindt’s trademark narrative long game while expanding the scope of the story beyond the titular team. 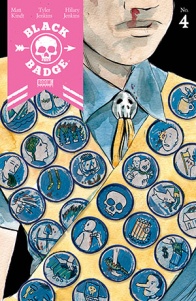 The Black Badges are invited to the compete in the Badge of Champions-a gigantic secret convention where scouts from competing disciplines meet every year for a cut-throat survival course. The objective is to win—no matter the cost.

Following their successful partnership in “Grass Kings” Kindt and Jenkins is a pairing that seems destined to be uttered in the same breath as Brubaker and Phillips by melding grounded and humanistic stories about real people in situations of heightened drama and duress. Artistically, both Kindt and Jenkins are very similar, eschewing photorealism for loose and expressionistic renderings that rely on an economy of line to communicate their developing dramas. Like Kindt, some readers may be turned off by Jenkins’s style that can be viewed as hurried and unpolished, but there is a startling efficiency in Jenkins’s panels that allows the story to shine. Jenkins’s sense of design is masterful as well, working with Kindt’s scripting to modulate the pace of the story and shift tones. Essentially, Jenkins achieves a verisimilitude that at first blush wouldn’t seem possible, thereby challenging notions of what it means to portray a story in a realistic manner.

This artistic similarity between Kindt and Jenkins likely allows for a storytelling simpatico that allows the two creators to focus on story beats rather than peppering their story with manufactured splash pages. It’s hard to imagine a more fitting artistic surrogate for Kindt than Jenkins. They even tend to to employ their talented domestic partners as colorists (see Sharlene Kindt’s beautiful work on “Dept. H”), and Tyler’s wife, Hilary, provides a gorgeous painted palette to “Black Badge” that is reminiscent of her work in “Grass Kings.” Here her work seems more experimental and varied, which is in keeping with the shifting globetrotting settings.

Issue 4 of the fledgling series has more changes of scenery than usual, mirroring the narrative twists that serve to conclude the previous issue’s cliffhanger (for now), send the team to their headquarters on Wayword Island, and set the stage for a competition with an unspecified goal where Kenny, Cliff, Mitz, and Willy will square off with similarly-constructed but divergently-skilled Blue, White, and Pink teams on a private island setting in Hawaii. The brief introduction of these teams allows for some rare comic beats in the series that portend some juicy conflicts in the near future, but more than that, the introductions serve to quadruple the series cast in a matter of two pages. Narratively, it seems early to pull the ripcord on the original premise of the series to introduce this intramural competition concept, but Kindt has earned reader’s trust. In the hands of a lesser creator, this reviewer might find cause for worry, but both in narrative and production-level world-building the concept has quickly become too rich to dismiss as a simple (albeit unexpected) twist on a military espionage thriller. A brief line of dialog in the premier issue has placed “Black Badge” in Kindt’s world of “Mind MGMT,” and an issue four character puts “Black Badge” in the world of “Grass Kings” as well. While these may serve as easter eggs for his fans who will no doubt delight in the knowledge that these characters co-exist in a shared universe, the overall effect is that “Black Badge” is intended to be taken just as seriously as Kindt’s series precursors.

If Kindt has a shortcoming, it’s that his character development sometimes does not achieve the heights of his tight wire storytelling bravado, and issue four does little to flesh out the members of the Black Badge team beyond their relatively one-dimensional representations and mysterious origins. The only team member we really know about at this point is Willy, and he is still often reduced to playing the chicken little of the group who is eager to earn the withheld trust of the other team members. While some of this likely serves to set up some organic exposition and conflict in future installments, readers may find themselves eager to know more about Kenny, Cliff, and Mitz sooner rather than later (nothwithstanding Mitz’s previously revealed Pippy Longstocking backstory). Again though, Kindt has earned the trust of his readers.

Perhaps not ironically, Kindt traffics in stories that rely on secrets and trust. “Black Badge” continues that tradition. This issue may be asking too much for readers with which the series premise was already straining at the seams of credibility, but this issue also reminds fans of these creators that there are likely more surprising twists to come. No one saw this coming.

Final Verdict: 7.5 – “Black Badge” veers into new territory with issue 4 just as readers might have presumed to know where Kindt was heading. It’s literally a whole new game.