In darkness, the Midnight King questions his life. Once again given the freedom to speak, he allows another to fill the silence, for that is what he is most comfortable with. He listens to the crusher, for that is what good men do. For he is a good man . . . isn’t he? 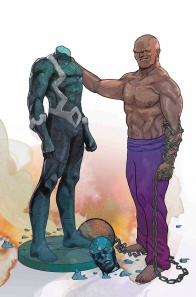 MAN TO MAN!
• When their prison break ends in catastrophe, Black Bolt and the Absorbing Man are forced to confront their pasts – together.
• What makes a hero and a villain?
• When new hope comes from an unexpected source, Black Bolt faces a choice. What price will he pay for his freedom?

I’ll be honest, after last month’s cliffhanger ending, I wasn’t quite sure where this issue was going to pick up. Would we have a psychic battle with the Jailer? Would we just cut to the aftermath of the battle? How trippy would things get? Well, instead we get a good ol’ fashioned flashback issue, complete with tragic backstory. As much as I would have loved to see Black Bolt stuck in some trippy mind battle, Ahmed’s strength so far has been writing a compelling tragedy featuring a severely weakened Black Bolt.

Here, the former king of the Inhumans finally gets to express his thoughts, his worries, his sins, to someone other than himself. Granted, the answers are only drawn out as responses to Crusher’s recounting of his past, but they are still offered freely. If you’ll indulge the literary critic in me for a moment, there is just something so effective in the simple way that Ward places Crusher and Black Bolt. By placing them on opposite ends of the pillar, they are both facing opposite directions (watch in wonder as I state the obvious) and are unable to see what the other can see, paralleling the experiences of our two characters.

They have had profoundly different lives, with profoundly different challenges; Black Bolt’s past is characterized by isolation and loss while Crusher’s is filled with rage and fighting to wrest control over a life which seems determined to remove it. Yet they find common ground as the conversation unfolds and neither one looks down upon the other. They recognize that their lives are different and it makes the moments when they connect, when they grow to understand each other more, all the more meaningful.

As I have said, month after month, Ward is a master when it comes to paneling and this month is no exception. He sets the paces of the comic with his panels right from the get-go and then does something unconventional for the series so far: he sticks to a 9 panel grid for Crusher’s flashback. Or more specifically, he uses the grid just for the past panels that are Crusher focused. Anytime Black Bolt or present Crusher are in the panel, it breaks from the very rigid grid, although it still stays in the locations. Let me explain.

On one page, the top three panels are laid out as you would expect, all the same size, all spaced out the same way. But then we get Black Bolt and Crusher talking, once again, in these skinny panels that are recessed into the center of the page more than the grid panels. Then, for the final panel of the page (which is a shot of a cop car from the past), it is back to the perfect grid panel, placed as if the whole page were a normal 9 panel grid.

However, as the flashbacks creep closer to present day, the grid starts to bend and break. There are still 9 panels per page but by the second to last full flashback page, the grid morphs, growing to show the increasingly complex nature of Crusher’s life. When we get Black Bolt’s single flashback page, the panels are a jumbled mess, strewn about the page, reflecting Black Bolt’s own view of himself at the moment.

I would also be remiss if I didn’t discuss the color composition of this issue. Deep blues and purples coat the backgrounds of the room Crusher and Black Bolt are trapped in and these are the same colors that coat the backgrounds of all of Crusher’s most tragic moments while the oranges and reds show his happiest and his angriest, tying these two emotions together.

Okay, enough of the conceptual and technical. This series has proven itself already. But there is one final thing, and one stray observation, that I want to talk about and that’s the question that this issue poses: is Blackagar Boltington a hero?

He has done many things that he is not proud of and been privy to many morally difficult decisions (see Jonathan Hickman’s “Avengers,” “New Avengers,” and “Secret Wars”). We know he is a good man, this series has made that readily apparent, but, as Crusher is humanized in this issue, we see how similar the two are. So, what makes the decisions Black Bolt made heroic while the ones Crusher made villainous?

It is a hard question. Prior to this issue, this would be a simple one but because of this issue, it’s not an easy question. Ahmed, in three short issues, has crafted a complex, heart wrenching character out of a villain that was, sadly, wasted in his previous series. And it makes the final page all the sadder. This series, while bearing Black Bolt’s name, is about Crusher as much as it is about the titular inhuman at this point.

If I have one problem with this issue, it would have to be the rubbery, clay faces that ward draws for Lockjaw and Crusher. There are a few panels where Crusher’s neck seems to bend a bit too far and makes for an unintentionally comedic effect. It can break the immersion but really, this is a minor complaint.

The other thing that bothered me here was actually the transition from the previous issue to this one. It’s not clear how we got to the opening of this issue from there. However, this is part of the mystery of the Jailer. Additionally, because of the focus on the flashback, we don’t get to see a lot of the other prisoners, which is a shame but I expect we’ll find out what happened to them in the next issue.

So, is Black Bolt a good man? Only time, and the next issue, will tell.

Final Verdict: 8.7. A beautifully crafted issue soaked in questions, with no answers yet. At least, no easy ones.