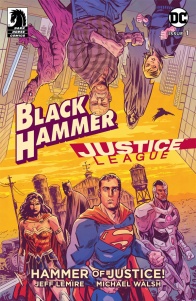 A strange man arrives simultaneously on Black Hammer Farm and in Metropolis, and both worlds are warped as Starro attacks! Batman, Green Lantern, Flash, Wonder Woman, Superman, and more crossover with Golden Gail, Colonel Weird, and the rest of the Black Hammer gang!

Combining different heavily detailed universes can be a tricky task. From the crew on the Black Hammer farm to the high-flying Justice League, there are wildly different tones at work. “Black Hammer” relies upon, at least in part, a very sedentary lifestyle, at best kept out of sight as the former supers have their more mundane problems like running their farm since getting stuck there. On the other hand, the Justice League thrives on its adventurous nature, not afraid of the public eye in the slightest. Can Jeff Lemire merge the nearly hopeless setting in Rockwood with the realm of hope embodied by the DC Universe?

In a word: yes. Lemire does an excellent job introducing new readers to his world, as well as the distinctions and similarities between it and the DC Universe. From the perspective of a reader who has had little if any exposure to “Black Hammer,” the various archetypes are instantaneously recognizable, all the better seen with the deliberate use of parallel dialogue between the worlds (more on that below).

The forms of humor differ from one world to the next. “Black Hammer” uses a dry wit, with each character exasperated with the others and their actions, leaning on less child-friendly topics like picking up strangers at bars with an overall feeling of people being around one another for far too long, as if made into some kind of dysfunctional family. On the other hand, the DC Universe has a healthier rapport amongst the members of the Justice League showcased by a quicker, more trusting back-and-forth on the jokes, even if some of them (such as “Aquaman talks to fish”) being pretty worn out.

The aforementioned parallel story structure is by far the highlight of Lemire’s script. Bouncing back and forth through juxtaposition and repetition, “Black Hammer/Justice League: Hammer of Justice!” #1 showcases how similar and different the characters are, and demonstrates the sheer degree to which their circumstances, from “freedom” on paper to decade-long de facto imprisonment, influences who they are through the lens of their personalities.

Admittedly, Lemire centers the story of “Black Hammer/Justice League: Hammer of Justice!” #1 mostly on the cast of “Black Hammer,” but such a concentration is hardly unexpected. After all, “Black Hammer” is the Dark Horse Comics property, and has been the subject of Lemire’s focus (as its creator) in recent years. The setting of the Black Hammer farm and the interactions (and problems) of the retired heroes who live there forms the bulk of the plot, though in interesting, unusual ways. In fact, perhaps a more honest description would be “Black Hammer/DC Universe,” as the combination appears to be developing into something more expansive than just a Justice League problem, with Lemire’s plot all the better for it.

While the teams may not directly interact, Lemire more than makes up for it with the fun and interesting setup. Who is the mysterious man? What is really going on? How will they meet? Will they meet at all? Can they get through one of said meetings without succumbing to the standard “fight upon meeting” introduction if they do? All of these questions and more arise from the fish-out-of-water story that begins the arc.

Using both his illustrations and his colors, Michael Walsh shows his expertise in a ridiculous, yet emotional visual storytelling. The relatively simple styling, from the roughly cut appearance of the “Black Hammer” crew to a similarly stylized look for the DC Universe helps to merge the two into an intriguingly cohesive whole, and some deep shading even in broad daylight helps to keep a slightly morose tone in spite of the ridiculousness all around. Jumping from mundane farming to high flying superhero action and more, the two universes seem both distinctly separate and very much aligned with one another.

This similarity is not to say that Walsh’s presentation of both universes is entirely the same. There is heavier detail in the DC Universe befitting their more public nature, but the real difference comes from contrasting color palettes. “Black Hammer” seems to rely on darker, cooler colors, in keeping with the nearly hopeless atmosphere of attempts to escape the farm, with different colors side by side complementing one another rather than giving contrast. On the other hand, the DC Universe thrives on its diversity, from the warm yellow of the midday sun to the cool blues and purples associated with Starro and its shadow, to mergers between the two around Cyborg’s sonic cannon and more. In all, this diversity of hues helps to sell the much more action-oriented nature represented by the public behavior of the Justice League as contrasted against “Black Hammer” and it’s more under-the-radar presentation.

An interesting jumping on point for fans of the Justice League and “Black Hammer” alike, it’s hard not to get excited about the next strike for the ‘Hammer of Justice!’ inter-company crossover.

Final Verdict: 8.0 – The cross-company superhero crossover ‘Hammer of Justice!’ is off to a fun, interesting start.