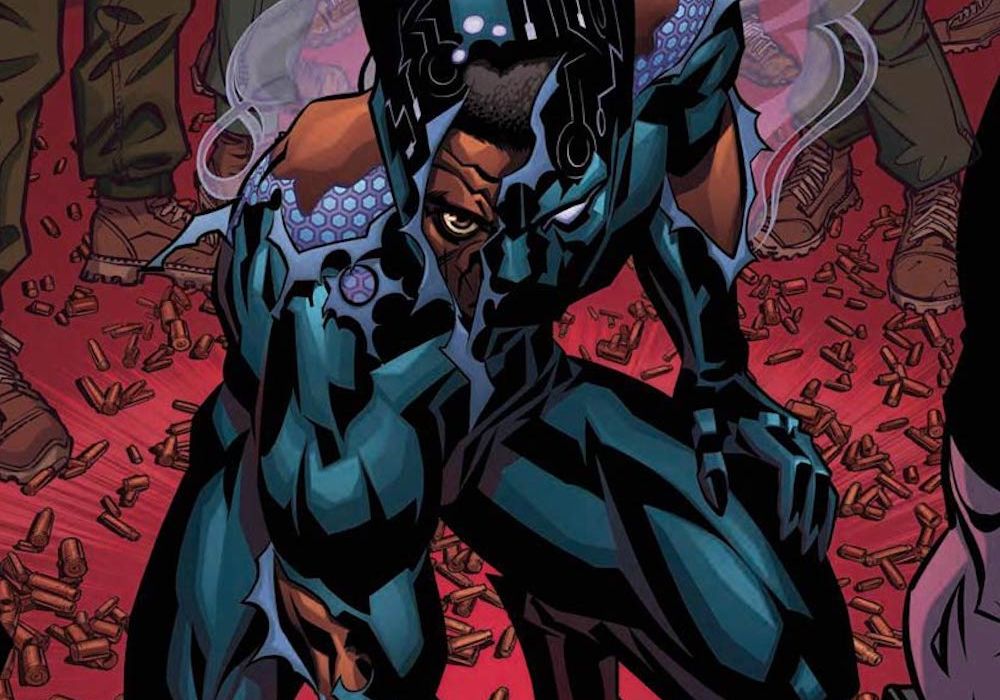 The over-repetition of dialogue aside, “Black Panther” #16 is a fun representation of the eponymous character and his team, demonstrating a variety of sides to working as both a king and a superhero in Wakanda. 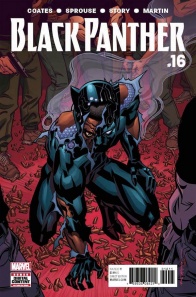 FULL COVER CHARGE! Club Fenris is the most exclusive nightspot in New York City…even a king has trouble getting in! T’Challa needs to get into VIP no matter what Piledriver and Thunderball say about the guest list…Still, without the Wakandan gods looking over his shoulder, there’s no telling what trouble T’Challa will get into…

Ta-Nehisi Coates writes an interesting story in “Black Panther” #16, one that delves into both the political atmosphere of being the ruler of a country and the more boots-on-the-ground aspects of being a superhero.

T’Challa, the Black Panther, doesn’t really show a lot of expertise with respect to ruling, but perhaps that is due to the interjections of his mother, who dominates the meeting of the Wakandan Constitutional Council. The application of democratic processes to a monarchy traditionally kept away from such systems is presented in a slow, but realistic way. While the Council do want to be heard, they also seem a tad overzealous, needing to be reined in on account of the fact that Wakanda is not quite so democratic just yet. Still, the king’s lack of action seems a bit odd, even if it is overwritten later in the issue with a briefing to T’Challa in private. Still, even these idiosyncrasies can be overlooked given the king’s position: he is more attuned to hearing out his subjects’ concerns as a stoic ruler and dealing with them personally, so of course he would instinctually apply the same behavior to meeting with the Wakandan Constitutional Council, to act in a way he feels familiar in an unfamiliar environment.

The infiltration and attack upon the Fenris Club is amusing, yet brief. It helps to showcase the powers of T’Challa’s teammates, in the very least. N’Kano’s personality is on display with his intentional use of clichéd dialogue and references for an injection of humor into the story, and plays off well against Asha’s admonishment of said dialogue to form a classic comedic duo.

However, some of the dialogue could do with improvement. In particular, Andrea and Andreas von Strucker’s use of racist terminology when speaking to the Wakandans, while definitely expected, could use a bit more variety. Rather than mixing up different forms of slurs, they default to only using the idea of “monkeys in cages.” While such dialogue is meant to be disgusting and insulting, and should not be used to the point of overtly offending readers too much, it unfortunately also falls into the trap of being overly one-note.

T’Challa’s talk with Thunderball is very kind and well thought out. Through the king, Coates expresses the idea that people should not aim to be identified as a different race’s version of a person, such as “the black Bruce Banner” or “the white Elliot Franklin.” Rather than admonish the process of thinking that way in the first place, Coates seems to encourage people to forge their own name for themselves through their own efforts.

Ororo Monroe, a.k.a. Storm, works very well as a framing device for the issue. Her internal narration combined with the sheer act of her flight all around Wakanda helps to grasp the wide sweeping nature of T’Challa’s domain, the breadth of his responsibility, while also showing it with respect to nature and the masses of civilians rather than focusing on individual people.

When drawing Storm, Chris Sprouse’s artwork is heavily influenced by perspective. Ororo’s flight is framed in such a way as to emphasize the environment over the person, demonstrating how powerful she truly is, her connection to nature itself, and her relative disconnection from the individual superheroics of Wakanda’s people.

By contrast, Sprouse draws all other scenes with an eye for individual people and actions, tightly packed and focused in on the here and now, rather than wide reaching implications of the future or the environment. This is not to say that either one is more important, but rather to emphasize the differing perspectives and priorities of a heroine with powers over nature itself as compared to a hero who has relatively street-level powers.

Laura Martin and Andrew Crossley’s coloring emphasizes the disorienting nature of certain parts of the environment, be they simple electrical lighting or superpowers. Some of Martin and Crossley’s coloring choices seem to be in order to maintain a sense of realism. The flashing lights of Club Fenris are disorienting, forcing attention away from them and toward people in order to maintain focus. Similarly, readers may have had experiences like this with regards to bright lights in their own lives, especially if they have been to clubs.

Other parts of Martin and Crossley’s coloring appear to be an effort to show how bizarre and otherworldly the superpowers can be. While electrical shocks are shown in a similar way to the lighting, they seem even brighter and more distracting, making attention on the people in a scene more difficult. On the other hand, the warped colors shown with the demonstration of N’Kano’s powers over vibration are representative of how unnaturally the air is rippled by his show of force.

In all, “Black Panther” #16 is an interesting issue, one that demonstrates a variety of sides to conflict in Wakanda. However, it could still do with some work in its villainous dialogue.

Final Verdict: 7.0 – A fun issue that showcases both Black Panther’s team and his political power, albeit with a little bit of over-repetition of dialogue.