Two of the biggest superhero movies of the year are ready to duke it out! Let’s be honest, that’s why these two are fighting. There have been plenty of “Deadpool versus” comics lately, so this is the latest in the line, but after the hit that is Black Panther, this clash was inevitable. So let’s take a look and see how it goes. 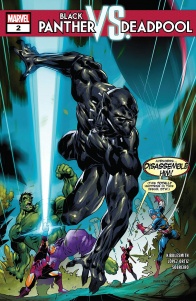 DEADPOOL ON THE HUNT! Deadpool’s carving a path through the Wakandan wilderness on the hunt for Vibranium! And his missing right arm! The Black Panther proooobably should be watching him. But T’Challa’s mind is distracted with the possibility of a revolutionary new technology. One that could change the world… starting with Wakanda. But there may not be a country to revolutionize if Deadpool goes unchecked. Will the king and the sometimes-hero reach an accord, or is this a fight to the death?

The second issue of “Black Panther vs Deadpool” brings us round two of the clash, with Black Panther currently ahead by an arm. Deadpool’s arm, in fact. Yet this creates a MacGuffin of sorts (aside from the Vibranium) that opens the door for plenty of wacky hijinks.

Of course, hijinks does indeed ensue, at least anywhere Deadpool goes. Daniel Kibblesmith fits in plenty of gratuitous violence and a good amount of humor, while surprisingly even managing to get some good commentary on the state of the world in there.

Daniel Kibblesmith’s writing is definitely the strongest part of “Black Panther vs Deadpool,” at least as far as Deadpool is concerned. There are some lines and gags from him that work perfectly with his fourth wall-breaking persona and are overall quite clever.

For instance, comics tend to bracket words when they’re being translated from another language, . So if Deadpool doesn’t speak the language, he just uses the brackets himself and suddenly everything he’s saying is being translated from it. That’s a clever play on the comic book medium we don’t see too often. Even the way he sings “Dramatic music!” with increasing intensity as the comic cuts between memories is well-done.

Similarly, the acknowledgement that this is a crossover helps make the tropes feel less forced. Deadpool knows and states repeatedly that there’s always a misunderstanding and a fight before the two heroes team up, just as readers are well aware will happen. After all, this is the latest in many similar crossovers, and Deadpool’s nods to things like “inciting incidents” and “gratuitous fight scenes” make them a little less stale.

As for Black Panther’s side of the story, things get a little more serious, as he contemplates morality and mortality. There’s a little more narration there than in the parts more focused on Deadpool, but it still carries the story forward. The setup and use of the holographic hero simulator was well-executed, and even though it may seem a bit dark that Black Panther practices fighting holographic versions of his own Avengers allies, it’s not different from Batman having a backup plan in case he ever has to face the Justice League.

Now let’s talk about the side characters. The first issue had the clever idea of bringing in “Fantastic Four” minor character Willie Lumpkin as the unfortunate soul Deadpool needs Vibranium to save, which helps connect this comic to the larger world overall. In this issue, we get a couple of poachers and their guides.

There’s nothing subtle about the poachers, with their overuse of bro terminology and stated desire to finally get a hug from their father. But there is some humor in how blatant it is, and they’re so unsympathetic that it’s easy to laugh as Deadpool tears them a new one.

On the other hand, the guides hired to show them around on their hunting safari are more sympathetic, pained by the jobs they have to do but needing some way to make a living. It’s not exactly a socio-economic issue that carries the comic, but it’s a nice touch.

On a more critical note, not all gags have to be recurring. Mentioning the poachers are driven by a desire for their father’s approval and affection once is a good humorous moment; bringing up the hugs a second time later falls flat. Similarly, Deadpool doesn’t need to constantly remind us that the crossovers always start off with a misunderstanding and fight, just once is enough. But that’s a small point compared to the overall quality of the writing work.

Unfortunately, while the comic’s writing and character work is strong, the artwork has some issues. Ricardo Lopez Ortiz is great at the gratuitous violence – and “Black Panther vs Deadpool” has plenty of that – but his character designs often look warped or stretched, with constantly-shifting proportions and shapes or sizes that do not always match up from one page to the next.

Additionally, there’s an overuse of attempts at adding detailing or lines to the characters and backgrounds alike. During the scene where Deadpool drives off singing “Dramatic music,” we get closer and closer shots to his face, which is good for building the tension, but the closest shot is covered with so many creases, scratches, and shading just made by drawing lines across everything that it just doesn’t work as intended.

That’s not to say the art is all bad. As mentioned, the action scenes are intense and impactful (even if those, too, have an almost unnecessary amount of action lines). Some scenes also have nice little nods and allusions, whether it’s the obvious ones like a meerkat and warthog appearing beside Deadpool or the subtle references like Black Panther and the holographic Captain America striking fighting poses that mirror those Goku and Vegeta strike in Dragon Ball Super. Not to mention we do occasionally get some great expressions, like the looks on the poachers faces before something very bad happens to them.

Overall, though, it feels unpolished. I mean no disrespect to Ricardo, whose art I have enjoyed in the past, but it doesn’t quite work here.

“Black Panther vs Deadpool” is a mixed bag. There’s a lot of great material from the characters and humor, as well as some pretty intense action. On the other hand, not all the jokes need repeating, and the artwork feels too scratchy and misshapen for the less-intense moments. Still, if you enjoy seeing Deadpool fight with anyone and everyone he can, or want more Black Panther in his element, you can do worse.

Final Verdict: 5.5 – While there is plenty of good material, there are a few stumbling blocks along the way that stop it from being great.