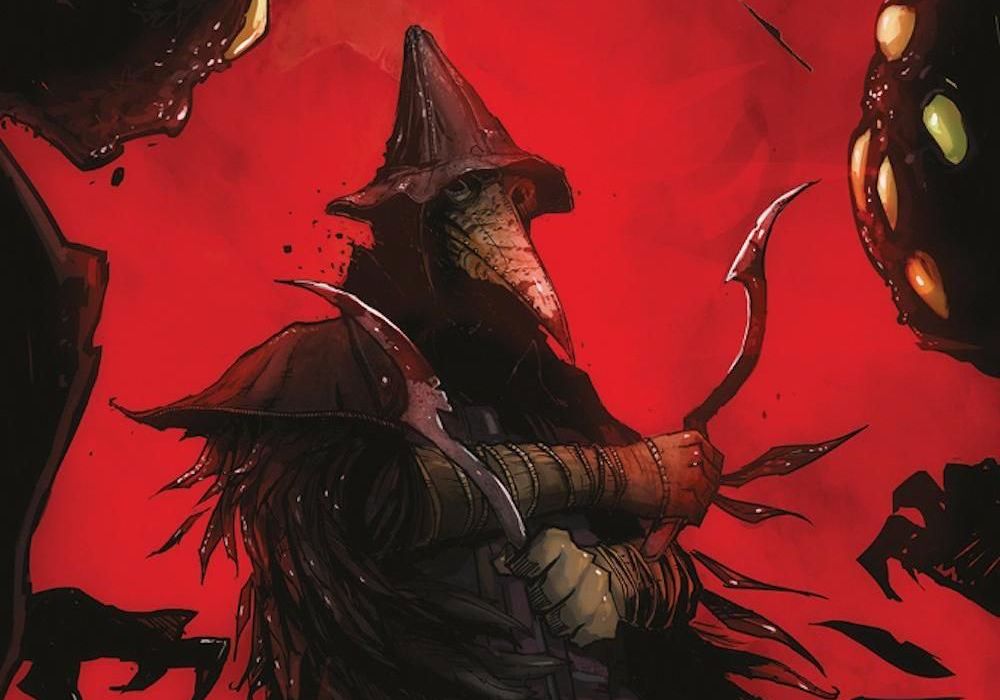 Following the intriguing insight of the encounter with Rom, does ‘A Song of Crows’ reach a satisfactory conclusion? See within. 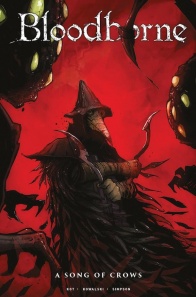 The maddening conclusion to the tale of Eileen, Hunter of Hunters!

For all of ‘A Song of Crows,’ Aleš Kot has crafted an interesting look into a fractured mind, one trying to come to terms with something. The arc seemed to be an interesting look into a character that fans of the Bloodborne video game may have been looking toward in order to flesh her out. Now, at its conclusion, does the tale of Eileen the Crow, Hunter of Hunters, resolve itself nicely, giving us some better insight into what drives her, who she is at her core?

Unfortunately, unlike in the arcs ‘The Death of Sleep’ and ‘The Healing Thirst,’ the answer, as demonstrated in “Bloodborne” #12, is no. In preceding issues of the video game ongoing series, Kot used fragmented sentences and repeated words and visual motifs to give a gaze into the warped mind of someone trapped in Yharnam, but with the possibility of us learning more about what is actually going on behind those words. Rather than give any grand revelations, or really much in the way of explanations at all, this conclusion just continues similar themes as in earlier ones, leaving readers confused and frustrated rather than giving any real meaning to using Eileen herself.

The closest we get to any real understanding is the idea that Eileen is deciding to “let go” of the person she is chasing. Who exactly that person is or was gets no lip service within “Bloodborne” #12 whatsoever, leaving readers lost without reading the first two issues of the arc, and possibly not explaining any further even then. Her overall attitude of fatalism (as implicitly demonstrated in the closing moments) may be the point intended by Kot as why things went full circle. However, the lack of real connection to her persona as the Hunter of Hunters (who is more heroic than simply letting things happen) on top of an absence of explanation as to what exactly was going on beyond some vague impressions makes it all come across as intentionally vague even beyond the famous breadcrumb style of plotting in Fromsoftware’s Soulsborne games.

A quote from Eileen herself seems very appropriate, but for the wrong reasons: “There is a hole at the center of my story… A hole in the shape of grief.” After such a good run so far, this issue’s storytelling seems to have regretfully become, to quote William Shakespeare, “full of sound and fury, signifying nothing.” The problem is that when it comes to “Bloodborne” #12, there isn’t much sound, and pretty much no fury either. There only remains… nothing, and an empty sense of what could have been.

Piotr Kowalski’s artwork continues to be a highlight, bringing life to even the less than stellar script presented for the conclusion to ‘A Song of Crows.’ His use of perspective helps to keep an air of foreboding and depression even in light of what script there is. Sweeping establishing shots to start “Bloodborne” #12 help to give a sense of the location on top of reveling in its marred, but still present beauty, while simultaneously showing a passage from the previous issue’s location to the current one.

Kowalski’s use of characters themselves also remains of note. Stoic expressions complement the beak mask worn by Eileen. Repetition of scenes with only small additions (such as an inclusion of a character in a panel where they were not before, but no other changes in camera angle or scenery), on top of keeping any violent action only implied and entirely off-panel, helps to both keep the story moving and give a sense of dissociation from the narrative in a similar way to Eileen herself.

Following up from the previous intriguing issue’s artwork, the use of a nine-panel grid on two of the pages at the climactic moment helps to give an overall impression of Eileen’s life in a way that the story itself seems to ignore on some level. The sheer difference in scenes, from a bonfire to a whirlpool to an ocean wave to a drowning child to the blood moon and an animal show both a distracted nature to Eileen’s mind and a highly varied skill set on the part of Kowalski in how he can give all of these scenes different, but equal weight.

Much like Piotr Kowalski, Brad Simpson’s skill is on full display in the colors of “Bloodborne” #12. His color palette is highly varied, ranging from the blues and purples of the Yharnam sky to an aqua hue for the ocean, along with varied shades on the red moon above. Some of the most potent artwork is in fact that with interesting use of grays and blues, such as Eileen’s confrontation with the person she had been following and the flashback to the child drowning. Both of these are in stark contrast against the yellows, browns, and oranges of the bonfire, or the reds of the magnificent castle where the story begins (and the previous issue had left).

The creative team on “Bloodborne” can do so much better than this, as had been seen in previous issues. Here’s hoping the next arc, ‘The Sundered Veil,’ is handled better.

Final Verdict: 5.5– The story of Eileen the Crow ends not in revelations, but in further confusion, making it all appear to signify nearly nothing at all beyond its own madness, even with its continued well-done artwork and colors.