Fearing the old blood may be the best option, but “Bloodborne” #6 makes for an intriguing journey nonetheless. 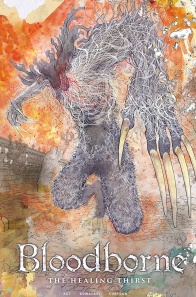 The dreadful secrets of The Healing Church are laid bare.

After the ‘The Death of Sleep’ arc, Aleš Kot shifted his focus to a different kind of protagonist duo, namely the duo of the priest Clement and the scholar Alfredius. While the previous issue had them separately used as a focus, “Bloodborne” #6 focuses intensely on both of the men, forming an odd friendship between them while examining the science and the orthodoxy that work against one another in Yharnam.

Much like the sudden “you died” panel in the first issue of the series, Kot isn’t afraid to inject some black comedy into “Bloodborne,” in particular with a specific, very off-color and disgusting joke that forges the start of the friendship between Alfredius and Clement. In most cases, comedy wouldn’t work in the Bloodborne franchise at all, but in this one, the sheer lack of humor in almost the entire game itself makes the occasional joke ten times funnier due to how shocking its inclusion can be for the entire narrative. As such, a mature joke like the one given allows readers to see a different side of some of these at times overly dour characters, and also gives a manner through which said readers can better relate to the relative common people of Yharnam (as opposed to the player characters they are used to, the hunters).

Kot presents the majority of the development for Clement and Alfredius in their respective journals, including their thoughts on one another. In doing so, he examines both an amoral, albeit somewhat benevolent take on Victorian medicine for Alfredius whilst also looking into an increasingly reform-oriented mind with Clement. The fact that he jumps back and forth between the two stories evenly helps to present them in parallel, while giving Clement the lion’s share of the character development in the process.

This parallelism allows readers to see a wider breadth of life in Yharnam, ranging from a random Beast (or is it?) attack to deliberate deception on the Healing Church’s part to cover it up, to myriad other elements. Together, without outright saying “the Healing Church is not good” or “hunters aren’t as protected against the plague as people were led to believe,” Kot manages to tell all of that in just the presentation of scene after scene, of the dramatic irony in the words of higher members of the Church as they, either through deliberate choice or accidental malpractice in the use of blood ministrations (transfusions or drinking blood, for newcomers’ parlance).

Further, the dual structure gives us a good look at just how differently Alfredius and Clement consider their arrangement. While they do have a kinship in their desire to find a more scientific, treatable cause behind the plague of beasts and its relation to the blood being spread amongst the populace, their internal thoughts differ greatly. Alfredius is shown to be more like some interpretations of Doctor Victor Frankenstein, concentrated entirely on his work, even if it can lead to horrific situations going forward. On the other hand, Kot shows Clement to be much more compassionate and based on a somewhat more commoner-esque rationale, doubting the work of the Church and helping Alfredius, but not willing to fully break away. While Alfredius is presented as an outsider through and through, Clement is more of an unsuccessful attempt at an internal reformist, someone who wants to stop the blood ministrations, but readers are well aware will not be successful in this endeavor at all.

The last few pages are admittedly a bit disorienting. Flitting equally between four different scenes in the parallel structure, from Alfredius to Clement to a friend of the former to a superior of the latter, the overall story is told well enough, but jumps so quickly between the different scenes that it may require four separate readings just to understand what is going on in each individual setting and to each individual character.

Piotr Kowalski’s artwork is, as ever, marvelous to behold. Much like his style in “Wolfenstein: The Deep,” he mixes sharp, realistic facial features with thoroughly disturbing imagery to create a deliberate uncanny valley effect where necessary, especially when it comes to the almost-human Beasts. The artwork on pages with journal entries is particularly interesting, as it requires a very small number of panels that can create the story on their own, rather than allow any reliance on dialogue within the panels themselves. While the last pages are, as stated, disorienting, their nature is helped by Kowalski’s use of different perspectives, from close-ups of faces to wider views to far wider angles and more.

Further aiding the already well-done artwork is Brad Simpson’s coloring. Utilizing several distinct palettes for Alfredius’ laboratory, the Church, and a common home, Simpson’s distinctions make discerning one character focus from another without any real difficulty, while also allowing them each to have their own distinct tone ranging from the wondrous to the mundane to the gothic horror for which the game is known.

Last, Aditya Bidikar’s lettering is wonderfully handled, especially in the pages regarding journal entries. The distinction between the handwriting of Alfredius and that of Clement helps to show their differences in profession, from the flowery letters of Clement’s cursive to the more straightforward print given forth by Alfredius.

Together, the structure of the issue and its artwork and letters come together for an unusual, but interesting whole.

Final Verdict: 7.5– “Bloodborne” continues to present itself very well through its new focus on non-hunters.