Bloodborne, the game series stepped into the macabre and with gameplay that mandates constant death, game overs and restarts gets a comic book limited series in “Bloodborne The Death of Sleep”. But can the creative team succeed in translating that formula into an interesting reading experience? Turns out they can, both for those versed on the lore of the series and to newcomers alike. 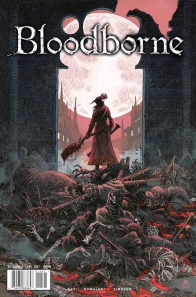 Written by Image Comics superstar Ales Kot, with artwork by Piotr Kowalski! Awakening in an ancient city plagued by a twisted endemic – Where horrific beasts stalk the shadows and the streets run slick with the blood of the damned – A nameless hunter embarks on a dangerous quest in search of paleblood…

Bloodborne, same as the Dark Souls series, is well-known for how hard it is: both in terms of the demanding gameplay as well as to how complex the narrative and its world are and how gruesome some situations can be. It is a game series that forces players to have both physical and mental stamina and it certainly is pleasing to observe how the creative team of Kot, Kowalski, and Simpson brought that experience to comic book form.

Kowalski’s art is probably the aspect readers will most quickly connect with the game atmosphere. The combination of a very detailed line style (which can be observed from layers upon layers of brick walls, smoke effects, clothing, and fur) with an abundance of gore and rusted weapons very effectively convey this series will hold no punches when it comes to the visual representation of extreme violence. The artist also uses interesting framing choices, relying on fire images to complement the proper panel work on each page. It is almost as if Kowalski has panels within panels, separating characters on specific scenes for greater pacing and build-up. Creature and monster design is also aptly done. Even though they don’t deviate much from the source material (not only on monsters, but also for some of the more human characters), they are well-represented on the printed page. And as for the battle themselves, they read extremely quickly, with movement lines and packed settings contributing to a sense of movement very much aligned with the frantic pace of the game itself. Readers will likely feel a sense of urgency of going through these pages, due to the combination of horrific beasts and how quickly they are dispatched.

Simpson’s color complement the entire experience, adding to the atmosphere both drawings and script are going for. He stays close to an amber and gray palette, not only for buildings and other constructs, but also to human and beast elements. The resulting effect is that these characters feel very much like a spawn of their environment, almost as if they are carved from the same material their world is. On some panels, Simpson chose to color entire backgrounds in a deep-tinged red, which highlights critical battle moments where monsters are defeated. That is another throwback to the game, when critical hits and defeats occur. Here, the effect works to the favour of the script, almost dividing longer battle sequences in smaller bits and giving them a better overall flow.

But does it all come together around a clever story, or does it feel more like a rehash of the game’s lore? Here is where Kot really makes a difference, by relying on a story technique observed in Edge of Tomorrow. Without going into spoilers, suffice to say Kot finds a way to have the main character experience this world in a very peculiar way, which is respectful to the source material, but that also branches out of it. This choice is wise not only to allow the writer’s freedom to explore these mythos in new ways, but also to lure readers that are not versed in the source material. More than that, it truly is unexpected once it hits and it prompts an immediate re-read of the entire issue and builds on the expectation for the subsequence entries to this limited series. It is early to say if the Hunter character will really become a compelling lead: he still reads on this one as a bit one-dimensional, but the impression by the end of the issue is that it was intentional. That only through multiple reviews of the story (this issue and future ones), will the full story be understood. Truly innovative in comic book form.

Final Verdict: 7.2 – A surprisingly good issue to an adaptation that could have ended up like a beat-by-beat retelling of a game’s story, but instead choses to use the medium’s strengths to deliver something unique. Well-complemented by an art and colouring style that add to the experience and show promise for future issues.