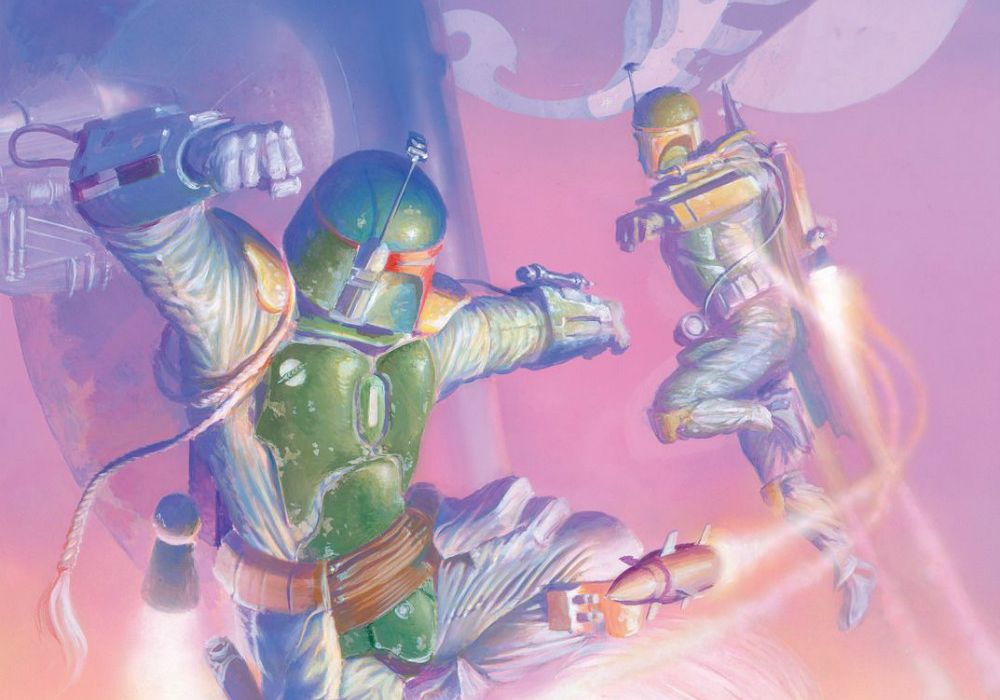 There is no single character who has garnered so much acclaim for so little effort than Boba Fett.

Speaking less than 30 words throughout The Empire Strikes Back and Return Of The Jedi, and spending most of his time just standing around looking menacing, the Mandalorian bounty hunter has become one of the most iconic characters of the franchise. He’s supposedly the Best Bounty Hunter In The Galaxy, but if you go by his role in the Original Trilogy you’ll be left scratching your head and wondering, “Really?”

Enter the Extended Universe. For the most part, these stories feel like masturbatory fan-service, grabbing you by the collar and screaming in your face about how cool Boba Fett is, without actually backing up that claim. There’s an issue of another mini-series where Fett loses a fight against Darth Vader, only to later reveal that, actually, the bounty hunter had spared the Sith Lord’s life. It’s a lazy storytelling technique of making every other character look weaker and/or dumber to make Fett look better.

In the sprawling and overwhelming world that is the Star Wars Extended Universe, for every half a dozen bad stories there’s at least one good one. Serialized in Topps’ Star Wars Galaxy magazine #5 to #8, Boba Fett: Twin Engines of Destruction is one of those good ones. In the scope of Boba Fett stories, it’s one of the best there is. 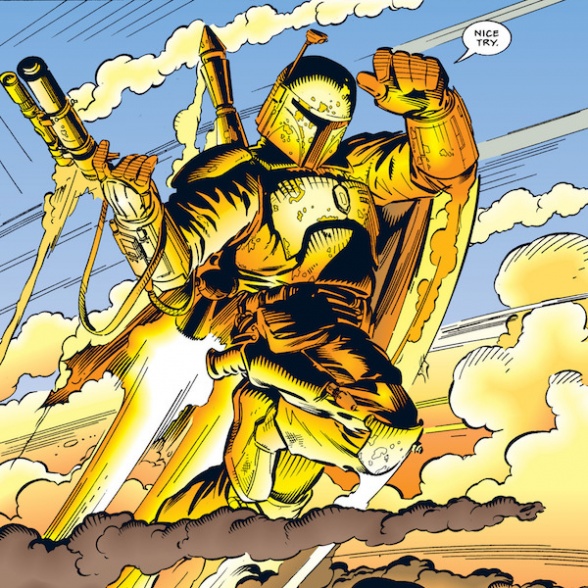 Set after Return of the Jedi, Fett has managed to escape the Sarlaac’s maw and is now keeping a low profile. Only a select few know of his current whereabouts. Meanwhile, a rookie bounty hunter named Jodo Kast has been impersonating Boba Fett. Wearing a similar set of Mandalorian armor, Kast has been using Fett’s reputation so he can cash in on the bounty hunter’s high price tag, while also increasing his own reputation by claiming he’s better than Boba Fett (If one of Kast’s hunts goes awry, it’s “Fett” who messed up instead).

Jodo Kast is slow, sloppy. While chasing a bounty he almost falls to his death in a spiked pit. He lacks honor and discipline, and only cares about one thing: getting paid. He is the exact opposite of Fett in everyway; something that fellow bounty hunter Dengar points out when Kast pulls a blaster on Corellian bounty hunter, something Fett would never do. Tired of Kast this ruining his reputation, a disguised Fett hires “Boba Fett” to collect a bounty on Nal Hutta. Arriving a few days beforehand, Fett and Dengar prepare an ambush for the bounty hunter.

Due to his lack of character in the films, Fett is more or less a blank slate. Andy Mangel’s writes Fett like he’s Clint Eastwood, with lines of dialogue that wouldn’t be out of place in one of the Man With No Name films: “Sometimes it’s better to think rather than speak”, “It’s called a hologram. This is called a trap. And I’m calling you dead.” He’s cool, a skilled warrior and strategist. When it comes to “the art of the hunt” Fett is Vincent van Gogh, while Kast is low quality photocopy of a Roy Lichtenstein painting. 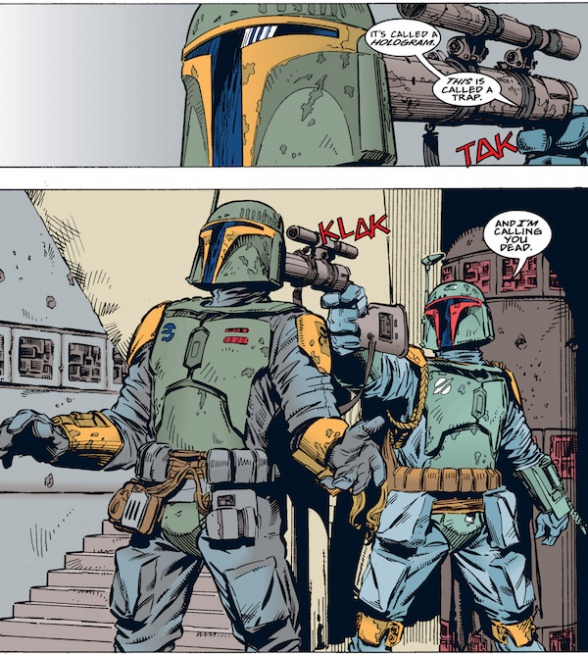 The second half of the issue is dedicated to Kast attempting to navigate Fett’s trap and the final showdown between the two hunters. This sequence really lets artist John Nadeau shine. You feel the weight of every blast door slamming shut just as Kast clears it, and how urgently he needs to escape. He captures the “lived in” aesthetic of the Star Wars universe, with the bounty hunter’s armors covered in grime and scars of hunts past. The back and forth fight between Kast and Fett is a solid and well choreographed fight scene, and really sells how outclassed Kast really is.

After easily dispatching Kast, berates the wannabe while stripping off his Mandalorian armor, “You didn’t earn this armor! You didn’t earn my reputation!” That’s the core theme to the book: that’s there a difference between earning a reputation and being given one. There’s a difference between being able to talk the talk and walk the walk. When we’re introduced to the real Fett, he’s collecting the bounty on man pretending to be a Sith Lord (His gloves are wired to trigger pre-planted explosions). Fett easily dispatches him, and when collecting his payment, he tells a crowd that they should “Pick [their] prophets more carefully.” 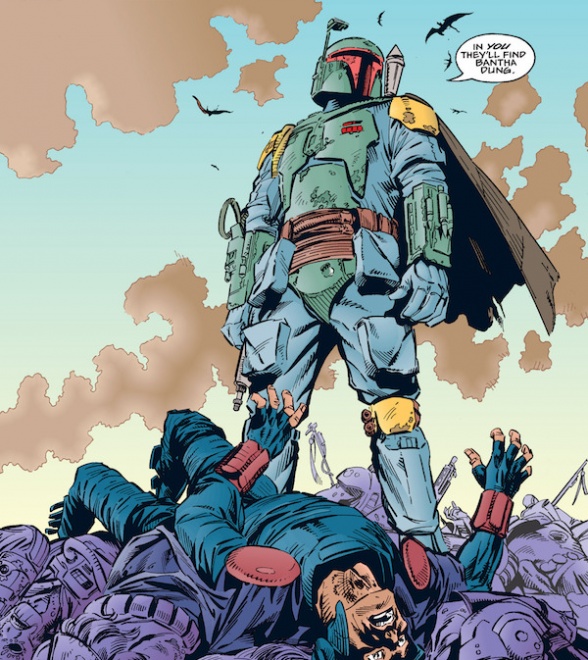 It’s a concept that extends past Fett into the rest of the Extended Universe. Before George Lucas would take us back to the past and over-explaining every detail with the Prequel Trilogy, the Extended Universe existed to introduce new characters, while also exploring nameless characters that appeared for a second in the Original Trilogy. The problem with a lot of these stories is that these characters are given bizarre stories and motivations. That ugly dude who threatens Luke Skywalker in the Mos Eisley cantina? He’s actually a mad scientist who creates an army of zombies. That robot bounty hunter who appears briefly in The Empire Strike Back? He hacked the second Death Star’s mainframe and overtook the space station, seconds before it exploded.

It’s the same problem that plagues other Boba Fett stories. That’s who Jodo Kast is; he’s every bad Boba Fett story that constantly tells you that He’s The Coolest Character Ever instead of actually doing things that cool. But when push comes to shove, those one-dimensional versions can’t hold a candle to a character that actually feels like a flesh and blood person.

Chris is a freelance pop-culture writer hailing from the sunny shores of Australia. He firmly believes art peaked with Prince's Batdance. He tweets at @garflyf