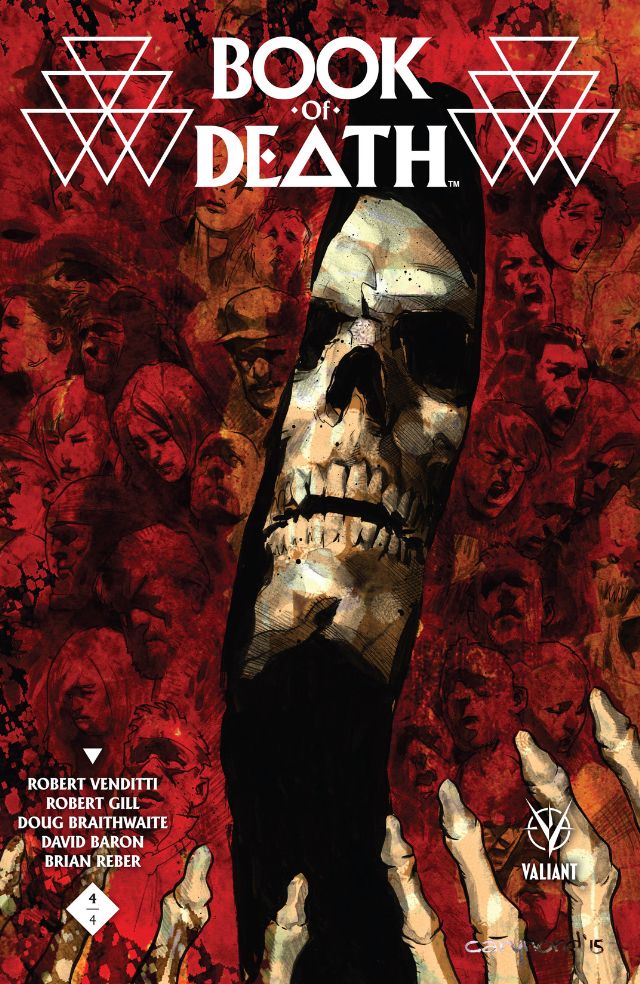 Valiant’s event has quietly been making waves in its universe. At last, the battle between the forces of life and death reach it’s conclusion. But at what cost? Be warned: There will be Massive Spoilers here. 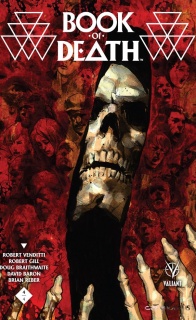 An evil Geomancer has torn the world asunder… The dark puppet master pulling the strings has been unmasked… And the Valiant Universe as we know it is being torn apart… The end is here!

Now, not even the combined might of the Valiant’s best and brightest can avert the coming apocalypse – not without a sacrifice, that is. Who will pay the ultimate price to avoid the Armageddon promised in the pages of the Book of the Geomancer? And how will it irrevocably change the course of Valiant Universe?

All the answers are here in the climactic final chapter by longtime Valiant scribe Robert Venditti and comics’ hottest rising star Robert Gill! So let it be written… So let it be done!

Everything dies. You. Me. Everyone on this planet. Our sun. Our gala~errr! Sorry! Wrong event! That bit of playful facetiousness aside, the truth that all things reach their end is a theme that has prevailed throughout Valiant’s event and now that it has reached the end, there will be changes to come for the universe. However, for all the cataclysm and death and destruction, taking place in the present and that which is foretold, the main focus has been on the relationship between two characters: Gilad and Tama.

Robert Venditti took the work that started in “The Valiant” with Gilad Anni-Padda, the Eternal Warrior, and continued to expand on that, showing us the kind of person one would have to be to bear the burden that he does. I’ll be honest, while I always did like Gilad from “Archer & Armstrong” and “Unity” there was this underlying feeling that the only reason he was around was to provide exposition about the past or, to borrow the wrestling term, job out to make other characters look impressive. Not here. Not only has Gilad shown his skills as a combatant and tactician here but also his growth as a character. He has gone through quite an arc from “The Valiant #1” to now and he gets a great sendoff.

But the relationship between Gilad and the little Geomancer Tama is the most important one. It has gone from two people that clearly did not understand each other, being separated by literally millenniums of time, to a clear and heartfelt big brother-little sister bond. For all her power, Tama is still a child and does need some encouragement and assurance. Seeing them go from argumentative to Gilad telling Tama that she is “stronger than you know. Stronger than I know.” is so heartwarming, it reminds me of the greatest Superman moment ever (I know you may disagree, but you are wrong).

Hope. That is the big takeaway from this issue. Hope for a better tomorrow. Hope to overcome the darkness. It is a rather uplifting book, considering how grim Valiant can be at times. It makes it all the more satisfying when Tama finally gets to cut loose against Master Darque.

Speaking of cutting loose, Robert Gill and colorist David Baron were nothing short of excellent here. Things get violent in this issue. Majorly violent and it is so beautifully rendered by the art work. As Gilad makes his way to save David, the trapped Geomancer, from his prison he has to fight through a ton of Darque’s minions. And being “Eternal” he takes a massive amount of damage and Gill renders the carnage in great detail and Baron’s reds for the blood is positively eerie. But even the quieter scenes before the great battle are rendered well. Gill and Baron bring a softness to the scenes with Gilad and Tama to really sell the heartwarming resonance between the two.

Doug Braithwaite and Brian Reber are no slouches on their parts as well. The excerpts from the Book they depict show more of Darque’s magic in action as well as handle the ending. They are able to capture the tones of this vastly different scenes fantastically, Reber’s colors in particular bringing a sinister undertone to Darque’s magic as well as the purity in Tama’s. The last page depicting a gorgeous landscape of a brighter Earth, humans and all, really drives home the message of hope for this book.

There were a couple of things here that I wasn’t fully keen on. I mentioned back in my review of “Book of Death #2” that I felt that this series ran the risk of having its pacing being skewed with, that it really would’ve needed a fifth issue to allow events to breathe a bit more. And while I do believe this story handled pacing better than “The Valiant” did, I still do wish it had that fifth issue because I felt the confrontation with Darque was a bit quick. On that note, the resolution to David’s story felt a bit too brisk and easy as well. Just don’t see a villain like Darque to let a loose end like David’s mom live after she saw him. And I am disappointed that David relinquished his powers to Tama. Would’ve loved to see that dichotomy (Tama having more of an affinity for plantlife, David for animals) explored in the future, but that was wishful thinking.

Also, feel like the text boxes to introduce the Unity members again was a bit much. Yes, I get that you want to keep readers in the know, but you already did this method of introduction and I don’t think a lot of people were going to jump into this story on the final issue. Just felt unnecessary.

But do you want to know the best thing about this conclusion? Last chance to avoid spoilers:

NO CHARACTERS DIE! Yes, there were some civilian deaths but no characters with established histories die. No character has a bridge dropped on them. No character is killed to “motivate” someone else (usually a woman killed to motivate a man). No character is killed in some seemingly editorial mandate. Okay, yes, Gillad Anni-Padda, the Eternal Warrior, does die by the end of this story. However, as we see from his upcoming series, he’s still active. In fact, death just seemed to piss him off! It is such a breath of fresh air to have an “event comic” result in zero major casualties.

Final Verdict: 8.7- At the end, “Book of Death” surpassed it’s predecessor “The Valiant” by keep the focus on a select group of characters and showing heart and hope in the face of adversity. Bring on “The Wrath of the Eternal Warrior”.