Brace yourselves, artist Laurence Campbell goes all out in the latest “B.P.R.D.: The Devil You Know” issue. Massive spoilers ahead. (Sorry, but it’s really hard to talk around them at this point!) 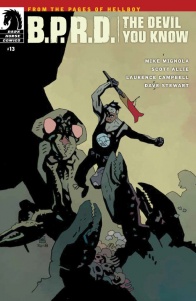 Hellboy, Liz, and Abe return to New York for a final attempt to save mankind, while the rest of the bureau tries to shepherd survivors to safety.

It still hasn’t sunk in that in two short months “B.P.R.D.” is ending. The end was always years away. Back in “B.P.R.D.: King of Fear,” when the first rumblings of the end were felt, there was still two more story cycles to go. Keep in mind the “B.P.R.D.: Plague of Frogs” cycle ran for eight years, so the ending was a distant, very abstract thing. Now the third and final cycle ends in two months, and for the first time I’m starting to feel it.

It was on the first page, when Fenix points out that all three hundred and sixty-nine Ogdru Hem are now loose in the world, that did it. Pandora’s box is truly open now and there’s no closing it again.

Then there’s the connections to so many other places, links to other stories. Seeing a moment from “Hellboy in Hell: For Whom the Bell Tolls” was a big one for me, as was moment with the god-like Rhinoceros in Africa, which brought back memories of “Hellboy: Makoma.” These moments summon up the finality those stories encapsulated so elegantly.

Most importantly, the issue feels like a breath before the storm. From beginning to end, Abe, Liz, and Hellboy are simply walking to Rasputin and talking. We intercut with large-scale action, destruction, and death in the rest of the issue, but at the centre of it all it’s calm; green where everything else is red and orange. This stillness is extremely unsettling in a way that chaos isn’t.

There’s a moment when Hellboy is talking about how all these different people had told him he’d end up where he is now, and he sounds so defeated. He was never going to escape his fate (otherwise it’s not really fate now, is it?), but at least he got to where he is now on his own terms. Hellboy never threw in the towel and took the expected route. He forged his own path to the end.

We’ve seen what happens when people give in to fate rather than make their own way to it. Memnan Saa saw what was to come, and so he abandoned humanity and fought only for what he already knew would survive (see “B.P.R.D.: The Black Goddess”). The Osiris Club knew only the original seven of them would see the end of the world, and in a bid to force fate’s hand, they murdered all the other Osiris Club members (see “Hellboy: The Wild Hunt”). In both cases, they gave in to the machine of fate, and in the process lost their humanity. Hellboy, Abe, and Liz meet their fate with their humanity intact, and this walk to Rasputin showcases this. After everything they’ve been through, that spark still burns in each of them. I love that Scott Allie and Mike Mignola gave this material space in such an otherwise action-heavy issue.

You should know that the preview PDFs we get for these reviews aren’t always complete. Often the colors aren’t quite final and the lettering almost always changes before the final version hits the comicbook spinner racks. Often it can be a little hard to judge Clem Robins’s lettering because of this incompleteness. That said, the PDF of this issue seems pretty close to final this time. I bring this up because I have to talk about Robins’s lettering in this issue, but if you’re looking at the final comic, you may not be seeing quite the same thing I am.

Robins does so much with the sound effects in this issue, especially in terms of direction and separating sources, while at the same time being utterly overwhelming. The sequence with Fenix and Howards trying to get underground is appropriately buried in sound. I mean, there’s a panel in there with Stazz surrounded, clawed hands reaching for her from every direction, and to really hammer it home, she’s boxed in on either side by sound too.

All the sounds are color coded too: the flying demons are green, the frog monsters are yellow, gun sound effects are orange, Fenix’s handgun is pink (goes with her hair) and purple for greater intensity, Howards’s sword sounds are blue… all of this makes the chaos readable. If you look just at the sound effects and ignore the art, you still get the direction of the conflict, so that even in panels where the monsters aren’t seen, you still know where they are in relation to the Bureau agents and vice versa. Robins uses intensity to create space beyond just two dimensions too. Look at when he decides to let the art sit above the sound effects, like this:

And look at the way he creates depth in the image with the size of the sound effects here: 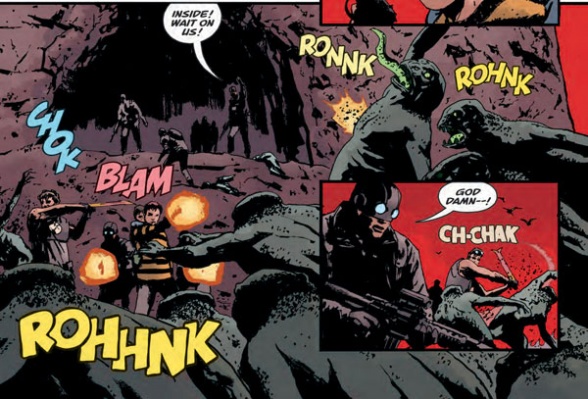 Or when a sound effect breaks a panel border to run into the next, connecting the two panels in the same time and space, which makes the reader correctly read Conner’s eyeline without flipping his panel (which would disrupt the overall scene direction).

Robins’s storytelling in this issue is simply fantastic.

As always, Laurence Campbell continues to impress with his ability to transform his work to strengthen connective tissue. The way he draws the “Hellboy in Hell” flashback panel feels appropriately otherworldly, and the scenes with Alice nicely reference Mignola’s work in “Hellboy in Hell: The Trials of Dr. Hoffmann” and Max Fiumara’s in “Abe Sapien: The Garden (III).” And when we get to the chaotic scenes, it’s impossible not to be reminded of his debut back in “B.P.R.D.: Hell on Earth—Wasteland,” which impressed us here at Mignolaversity so much, especially when Howards woke up and went all Conan. Campbell demonstrates excellent scene control, making the Bureau’s fight to the entrance of the underground immediately overwhelming, but still leaving room to ramp it up throughout the issue.

There was a really nice layout touch when Fenix is saying goodbye to Eris. In the memories Fenix sees, she’s looking back, to the left, to the past. When we return to the present, she’s looking to the right of the panel, at the entrance to the underground, to the future. Because of the left-to-right way we read the comic, Fenix looking back to memories feels like a stalling point, especially in the middle of a sequence that’s been continuously moving left to right. It’s subtle, but you feel it’s effect, even if you don’t consciously see it on the page.

Looking back to the past and forward to the future

“B.P.R.D.: The Devil You Know” #13 is an issue full of contrast and epic moments, yet it somehow manages to showcase the creators’ necessary restraint in dealing with this material. Knowing when to make things small seems key to making the big stuff work.