Kicked out of the orphanage he lived in, Atsushi is at the end of his rope. However, saving a man may have just changed his fortune and introduced him into a new world of intrigue with this first volume of “Bungo Stray Dogs.” 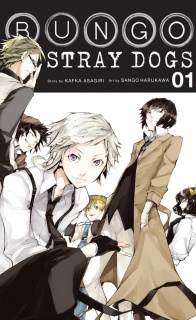 Having been kicked out of the orphanage, a despairing young man by the name of Atsushi Nakajima rescues a strange man from a suicide attempt–Osamu Dazai. Turns out that Dazai is part of an armed-detective agency staffed by individuals whose supernatural powers take on a literary bent!!

Let me talk to you about “Just Enough.”

I first saw “Bungo Stray Dogs” vol. 1 on a shelf at the library and the cover design (normally I’m not a fan of covers that have a giant black or white bar on a third of it, but the contrast with the rest and the logo design helped a lot) and the character designs did just enough to pique my interest in it. If you just read the back of the book, it doesn’t seem very unique. At basic, it’s a supernatural detective/action series. That has become such a dime-a-dozen concept that it almost comes off as mundane. However, the personality that the writing of Kafka Asagiri and the artwork of Harukawa 85 (Literally “San” “Go”) inject in the work does just enough that it elevated the work that by the end of it I want to see what happens next, which should be the objective of the beginning of a story.

While this first volume was a lot of introductions, it does focus on the orphan Atsushi Nakajima who was kicked out of his orphanage at first because of budgetary reasons. However, as the story progress, it becomes clear that isn’t true. From what we get at the start of his story, Atsushi feels at first at the end of his rope, desperate for food, shelter and eventually people he can be around. He comes off as over his head and even a little pathetic. But there is an endearing quality to him, both in the writing and just how miserable Harukawa can make him look at times that you do want to see him succeed and grow as his own supernatural links are revealed.

But as interesting as Atsushi is, it’s nothing compared to Osamu Dazai, one of the senior agents of the Armed Detective Agency and by a country mile the best character in this manga. From his very first scene of him “attempting” suicide via bridge jump the man has been fascinating. Aloof, but goofy. He has a variety of quirks (such as his fascination with suicide) and a mysterious past that is only hinted at here. In fact, when each of the cast has their special supernatural “skills,” Dazai’s isn’t his power nullification he displays, but listed as simply “No Longer Human.” When you combine that with Harukawa’s knack for visual personality, it almost makes you wish that Dazai was the protagonist instead.

The rest of the cast (with the exception of Kunikida, to a degree) and plot itself are just opening up with this volume. Even the basis for these supernatural powers are not established, but I want to give some praise that the creative team have gone with powers that feel a bit more off kilter. We have Atsushi the Weretiger, Kunikida’s ability to materialize anything he writes, Tanizaki’s illusions and so on. It’s more eclectic and allows for a couple of interesting turns, particularly in the back half of the volume when we get a bit more action as the agents of Yokohama’s Port Mafia syndicate begin to show up and begin to set up a basis for the series going forward.

I really enjoy Harukawa’s art style for this book. I talked earlier about visual personality and how it can help sell a character just as much, if not more, than the words. There’s a lot of examples of just visuals, both facial and body language, that can endear characters to us. Atsushi’s looks of miserableness and fear sell his predicimates more than the words do. Dazai’s sly smirks and playful, sometimes over-the-top acts contrast with his sharp eyes when things get serious. Even Kuikida’s adherence to structure is exemplified through his constant exasperated looks when dealing with Dazai’s seeming laziness. It also helps that everyone has a distinct look. Clothing and hair are so important and they to help sell personality.

That isn’t to say Harukawa skimps on the action either. This book gets pretty damn violent. Including stuff such and one’s back getting torn up by bullets and one character having their leg cut off. Nothing visceral or something that wouldn’t be out of place in a seinen manga, but certainly rough and our artist renders them well. There is a dynamism to the action, slick without ever feeling overboard, combining with our aforementioned discussion on Harukawa’s visual personality selling grief, anger and fear.

At the end, “Bungo Stray Dogs” vol 1 does just enough to tip one over to wanting to check it out more. Asagiri and Harukawa take what could have been a supernatural action story that wasn’t to dissimilar from a lot of others and injected it with enough of its own spin to at least form the foundations of an unmissable book. The next volume or two are going to be critical to build on the momentum and I’m looking forward to getting my hands on them.

TKO Studios burst onto the scene late in 2018 with a new business model: 4 titles, six issues each, released in single, trade, and digital format all at once. As such, they fell out of our usual review cycle. Let’s rectify that and see if the pulp-inspired Wave 1 title is as fearsome as its title suggests.

In Alex Alice’s “The Castle in the Stars: The Space Race of 1869,” we are invited into a world where the vision of the cosmos in the nineteenth century is not fanciful, but rather a scientifically accurate hypothesis. The planets closer to the sun are indeed younger and could be teeming with prehistoric life, while […]

While perusing my shelves to pick out a comic for reviewing, I found myself unable to decide on one because there were so many possible criteria for choosing it. Should I return to an old favorite just out of nostalgia, try a classic I had missed out on, or pick a comic to review purely […]