As old villains resurface with new strategies, Captain America and his few allies struggle to find an angle they can utilize to avoid the public and media’s perception to be used against the good of the people. But does this issue and arc provide something truly unique, or does it retreat old waters? 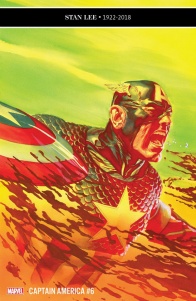 ‘WINTER IN AMERICA’ CONCLUDES… …with a shocking turn of events that will send the Star-Spangled Avenger’s life into a sudden dramatic tailspin you won’t see coming!

“Captain America” as a series has struggled a bit in recent years to find firm footing. More precise, it has struggle to find a direction that feels new and not consequential of all the storylines and layers added in recent history. By issue #6, the relaunch by Coates and Yu certainly delivers high marks on a number of comic components, but it is precisely on feeling fresh where it still needs to show excitement.

First of all, Yu has matured as an artist over the years and the quality of his output – already very strong – is now reaching new heights. Often in the past, his facial expressions would take a back seat to large, open battles, his more personal moments feeling somewhat awkward when some big spectacle was not to be found. Not so here in “Captain America” #7. In an issue devoid of any major set piece, and squarely focused on intimate character relationships and development, Yu has the opportunity to show how refined his anatomy work has become, how expressive his faces have gotten. There is a lot of emotion and surprises conveyed on the page, especially when the main villains of the book are concerned and involved.

Colors by Gho are equally impressive. For such a low-key, personal issue, “Captain America” #6 could have easily gone the way of a boring pallete, but the artist manages to infuse just enough variety to keep the book fresh. There are a couple of situations where the transition between day and night is handled purely on the colors applied to the open outdoors. Also, scenes that take place in the past, featuring a more traditional grandiose superhero pose and larger-than-life characters are depicted in bright colors, saturated even, which serve as a great contrast to the more earthly tones and muted colors seen elsewhere in this issue.

Coates on scrips is a bit of a mixed bag. There is an obvious admiration to the work and elements set forth by the already seminal Ed Brubaker run. Key villains return from that era and the overall tone of the book – that of high conspiracy elements and the connection between the fantastic and the political reality – harkens back to those story arcs. And while there is no criticism on that admiration per se, it feels too familiar at times for readers of both arcs. There is no imitation, plots are different, but they seem to move in the exact same direction, to the point that cliffhangers and reveals feel a bit choreographed and preordained.

When Coates does try to infuse more innovation on the story — either through mutant witch Selene or the antics of General Ross — “Captain America” #6 is at its strongest. These elements feel truly unique and unexpected, almost like joker cards that could turn the tide of the story at any moment. But for every crescendo that these characters bring to the table, a number of more common threads dominate the page, so they feel muted by comparison. It is almost as if these new toys are included on the sandbox, just to be left mostly alone, with little to do.

On the political elements of the book, something that “Captain America” has been well-known for since the seventies, Coates can come across, surprisingly, as restrained. And this is really not what would be the best thing for this book, not after recent story arcs or the richness of debate present in the real world. If Coates was sometimes too verbose on issues from his first volume on “Black Panther,” here the author appears as a muffled voice, particularly where his opinion and views could really have a meaningful impact on the broader mythology of the character. Coates fares better on the pacing of dialogue and even silent sequences, where his knack for deeper character studies shine brighter.

All in all, “Captain America” is a perfectly fine comic book, with excellent art and a worthy plot… just one that we have already seen before, with limited innovation or insight on the political angle the series is known for. Hopefully future arcs and entries will prove to be more deliberate and daring.

Final Verdict : 6.5 – Despite its beautiful art, “Captain America” fails to excite as it does more meandering on strong past stories, rather than paving new ways and paths into surprising and rich tales.