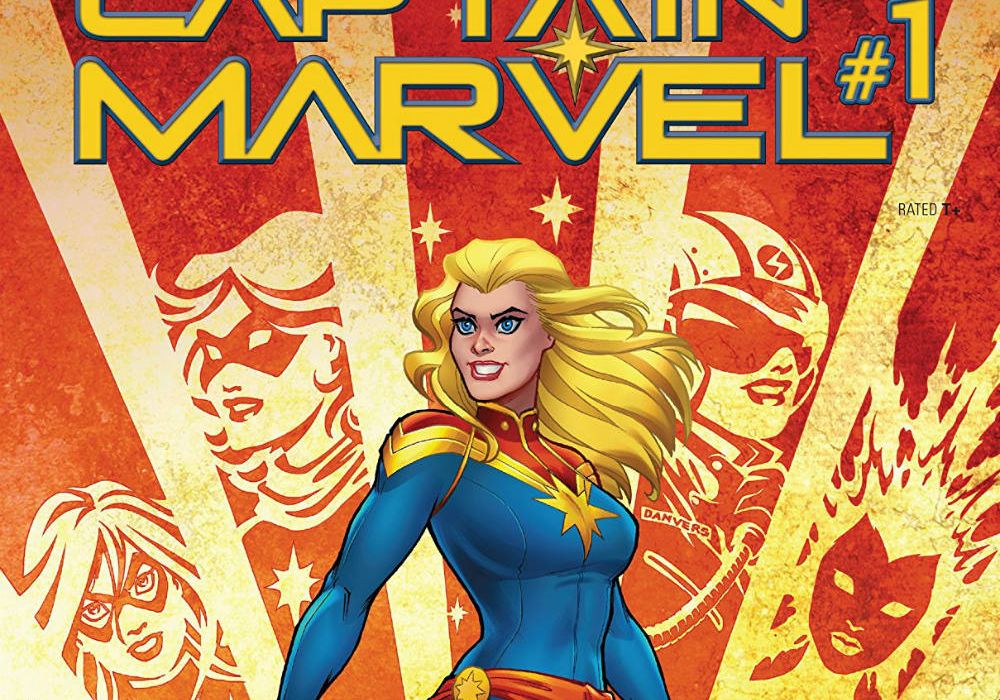 Captain Marvel returns to her regular series just in time for her big cinematic debut later down this quarter. What Kelly Thompson, Carmen Carnero, and team have come up with is an accessible entry gate for new readers, while still respecting several of Carol’s past adventures and relationships hitting almost all of the right notes. 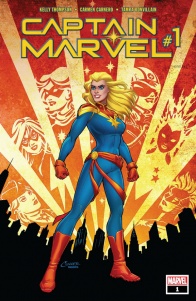 ALL THE STARS ALIGN AS KELLY THOMPSON AND CARMEN CARNERO TAKE ON MARVEL’S PREMIER FEMALE SUPER HERO! As Captain Marvel, Carol Danvers has spent months in space protecting Earth from alien threats big and small, but now it’s time for Earth’s mightiest hero to come home. New York City has never looked so good. But every re-entry comes with the unexpected, and Carol is about to hit a whole lot of unexpected. It’s a fresh start and an oversized, star-studded welcome home for a hero who’s been punching the glass ceiling since the 1970s – and just in time for the first female-led film from Marvel Studios! The next 50 years of Captain Marvel starts here!

There is a lot to appreciate from this first, extra-sized issue of “Captain Marvel.” First of all, and pretty much imprinted in hard code on each of these pages, the creative team is very passionate about Carol Danvers and her groups of friends and allies. The issue oozes a positive energy and a confidence that Captain Marvel is a major hero and that everything around her should reflect that. In an age where so many books approach a relaunch with a reimagining of their titular lead, it is fresh to see such a relaunch so enamored with its core strengths.

Carnero’s art was a wise choice for “Captain Marvel” and that becomes obvious when the script asks the artist to juggle, usually on the same page, large events and battles, with intimate conversations and dialogue. Carnero wisely uses small panels to zoom in on character’s faces and expressions, while a dominant panel, usually taking most of the remaining page, reflects the broader action at play. To a reader’s perspective, it gives a sneak peek into the mind of the main characters while these life-threatning situations are taking place.

Still on the area of details, Carnero is also careful on adding nuances to every page, be it from the suction points of a monstrous octopus-like creature, down to individual bystanders running away from danger in the background. The balance between the big scale and the small is very much aligned with the story itself – more on that later – so the pacing nevers feels off. It is not like “Captain Marvel” stops an action beat to go to a more character-intensive moment (or vice-versa), but rather that the two visual representations are happening at the same time, on the same page. Really effective in terms of story-telling and narrative flow.

On the situations where it does become truly personal, Carnero also aces the mark when portraying how Carol, Jessica and others are feeling. These are all characters that have known each other for years, that have very strong opinions about one another, so it is excellent to see their faces visually conveying that past connection, as opposed to heavy narration boxes labeling those links. It becomes richer not only from the drawing themselves, but mainly for the sense of continuing adventures and rich tapestry the entire issues is going for.

On colors, Bonvillain certainly went for a flashy, happy even, tone. This looks very much like a bright animation, an exciting entry to big adventures. There is little in terms of shadown and brooding; most of the action takes place in sunny Manhattan and, even when the time of day fades the pallete a bit, it remains as brightful as a Staurday morning cartoon. This is most certainly not a criticism, just a statement on the visual style the entire “Captain Marvel” #1 aimed at: Carol Danvers is a strong representation of the super-heroic community, and, as such, should be seen on the most positive light as possible.

Thompson obviously is having a field day on writing Carol Danvers. Her voice is that of a secure, seasoned warrior and hero, who have not lost her connection to humanity, friends, and partners. Beyond everything else, Carol wants to do good, in the widest of spectrums possible. If giant monsters are attacking New York, this is not more important than making sure that young heroes are getting the support they need. And do not stand in the way of Captain Marvel when one of her friends is in harm’s way.

The writer also takes advantage of the longer page count this issue could offer. That way, the balance between the more introspective moments and the more bombastic situations are balanced really well: neither overstay their welcome and both hand-off the focus to the other seamlessly. It also does wonders to re-introduce a number of Carol’s supporting cast, from Spider-Woman (Jessica Drew) to Tony Stark to a few others who shall remain unspoiled on this review. By having so many elements present within one issue, “Captain Marvel” quickly established a huge part of the canvas that future issues will explore.

If there is one area that could be criticized, though, is how some of the more peripheral characters of the book seem to spur dialogue specifically to demonstrate or recognize how incredible Captain Marvel is. It doesn’t feel jarring because they say it per se, but rather because the script felt the need to do so. Carol’s actions on their own, her facial expression, everything about her portrayal is already doing a phenomenal job at highlighting that, so when that dialogue hits, it feels overly-imposed, rather than natural.

That aside, “Captain Marvel” #1 is a great first issue. Moving at a fast-pace, and not wasting time revealing potential areas that will be further developed on future entries, it pulls readers in very effectively. Carol Danvers is a charismatic, powerful hero, with an equally impressive supporting cast. If future issues are just as interesting, and as beautifully drawn, this could be a defining run.

Final Verdict: 7.9 – An excellent start for the new adventures of Captain Marvel, this issue not only promises a lot… it delivers.